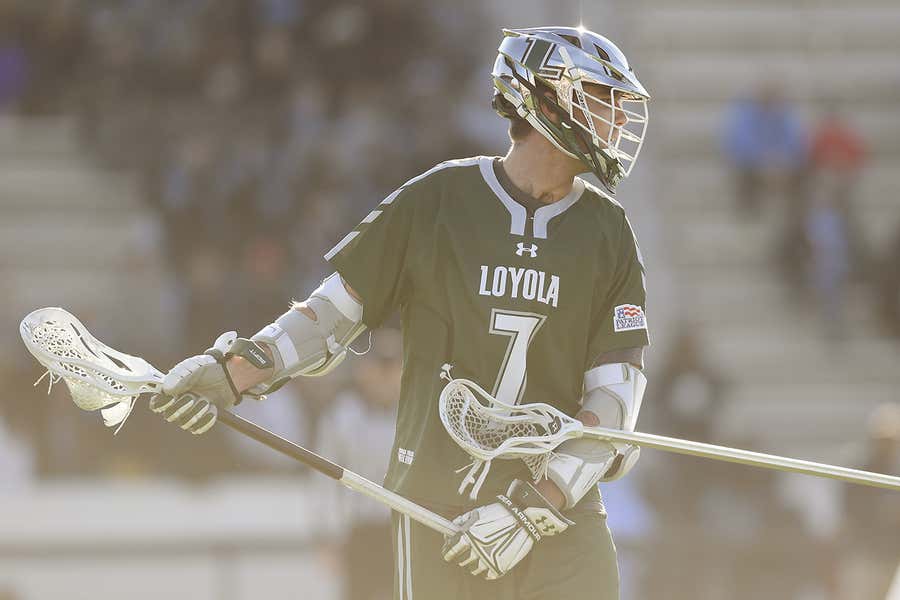 I need all of you to do me a favor real quick. I need each of you to stop whatever it is you are doing and thank whatever higher being you believe in that we are currently living in the same world as Patrick Spencer. Because there are so many people throughout the history of time who could not say the same thing. I mean it’s only been 2 games into his senior season but we are already seeing one of the most dominant seasons in college lacrosse history in the makings. It’s only been 2 games into his senior season and he can already fill up and entire year’s worth of highlights.

A 17-9 ass kicking over Virginia to start the season. An 18-12 ass kicking over Hopkins in the 2nd game of the season. Loyola started off the year against two teams in the Top 20 and they made both of them look like club teams defensively. It’s downright silly. And sure, it’s still incredibly early in the season. It’s not even March yet. But with Pat Spencer putting up 7 points per game, Jacob Stover putting up double digit saves per game, and the supporting cast of characters who all get to benefit from having Spencer feed them the ball? All I’m saying is that there’s a very real chance that this Loyola Greyhounds team could be one of the most dominant teams in college lacrosse history. Say what you want about ESPN, but college lacrosse doesn’t get a full feature on SportsCenter for no reason. Pat Spencer and the Greyhounds are just that filthy.

What a time to be alive.

We got off to an early start on Saturday morning with Duke scheduling Denver for a nice little 11am start. While all the basic betches were just starting to stroll up to brunch, Duke and Denver were already getting shit underway. And I wouldn’t have blamed either of these teams if this game had ended up being a bit of a snoozer due to the early start. But I guess the boys LOADED UP on some coffee and pre-workout to start their day because the ending of this game was goddamn electrifying. I’m pretty sure Duke scored with just about a minute left in the game to take the 9-8 lead. Then with under 20 seconds to go, Denver ties the game up and everybody figures they can get settle themselves in for a little overtime action to start the day.

But it turns out that Duke wanted to get the party started earlier so they decided to just win this shit in regulation instead. Faceoff with 18.7 seconds left to go. Ball goes Duke’s way, it ends up on the floor and then Joey Frickin’ Manown is there to pick up the loose ball, grip and rip, turn and rake, that’s ball game ladies and gentlemen. Joey Manown with ice in his veins and he sends Denver home with the L. And how about that for Duke, huh? Not only do you get a win against a top 10 team at home, but it’s not even 1pm yet and your day is already done. I’m sure the fellas had themselves a go on Saturday. Probably the best part of the win right there is the fact that they had an extra hour to celebrate.

Down Goes Yale! For The 2nd Year In A Row, Nova Takes Down Yale In OT

Yeah sooooooo maybe Yale should stop scheduling Villanova. At least stop scheduling them for their season opener. Because last year down in Frisco, TX it was Danny Seibel putting home the OT game winner against Yale. And then almost a year to the day, it was Connor Kirst delivering that same dagger again.

Now here’s where I’m going to stay a little woke on this–I have a feeling that Yale knew exactly what they were doing here. I mean they’re a bunch of Ivy League kids. Obviously they’re pretty smart. And obviously they would have realized that they started off their season with an overtime loss to Villanova, and ended up winning a National Championship that same season. Did the Yale Bulldogs throw this game on purpose because they just want to replicate what they were able to accomplish last season? I wouldn’t put it past them. However, I also wouldn’t put it past the fact that losing a Tewaaraton winner in Ben Reeves is going to be a difficult hole for Yale to fill this year. But again, I think there’s a slight chance that Yale just wants to replicate what they did last year and the only way to make that happen is to start off the season with an overtime loss to Villanova.

The Dane Train Has Gone Off The Tracks

Brad Voigt led the way with 6 goals and an assist, and that goal right there was pretty much the only summary you needed for the day. Syracuse was just having their way with Albany. The BTB feed from Rehfuss immediately followed up with that twister finish from Voigt. You don’t sauce that hard unless you’re looking to demoralize a team.

The one saving grace for Albany is that Syracuse had just gotten upset by Colgate in the Carrier Dome the week before. So they obviously had to come out in this game FIRING to make up for that loss. You combine that with the fact that it was Albany’s season opener and you can see how things got so one-sided out there. Either way, big win for Cuse and an…alarming loss for Albany.

This goal right here is a head coach’s worst nightmare. Every single thing about this goal probably made Joe Breschi want to murder somebody until it ended up in the back of the net. Classic case of a “no, no, No, NO, NOOOOO….YESS!!!” situation here. First off, an attackman is always going to get bitched at for forcing the ball to a longpole on the crease. Lucky for Andy Matthews, though, Jake Peden was able to handle that feed to save him from getting reamed out on the sideline.

After that, a longpole is always going to get bitched at for trying to go BTB on the crease. But Jake Peden is an assassin. The sauce just runs through his veins. So just as everybody is most likely screaming NO about going behind-the-back, he stuffs it in the back of the net and now we have one of the slickest highlights of the weekend on our hands here. Which clearly is no simple task considering how saucy this entire past weekend of college lacrosse was.