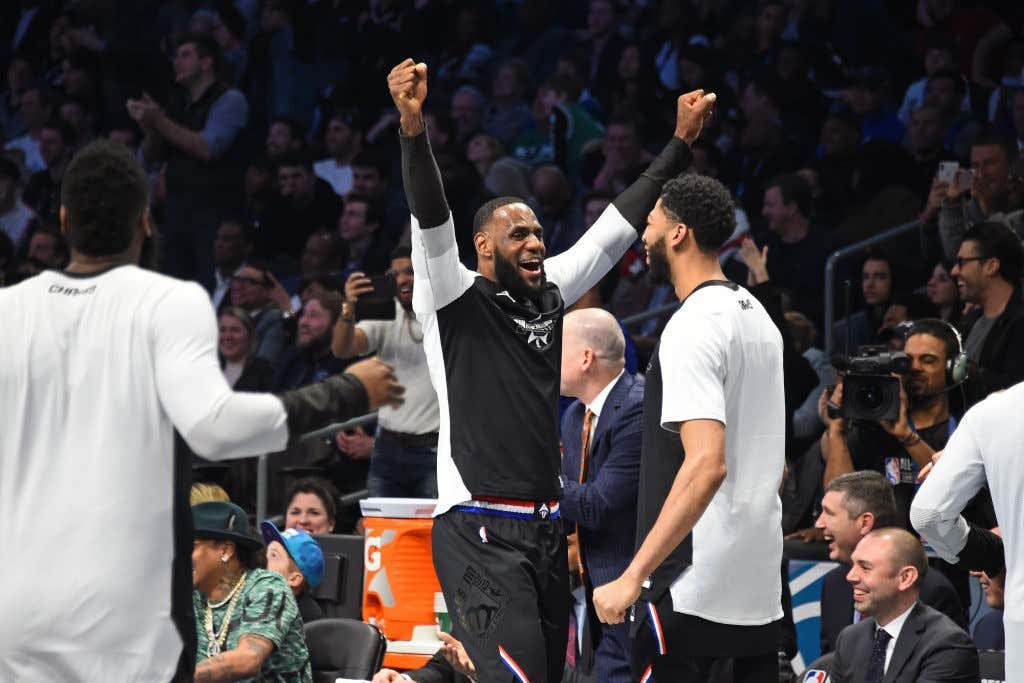 Early on, it sure didn’t look like this was going to be all that competitive of an All Star game. On paper I think everyone agreed that Team LeBron had far and away the better collection of overall talent, but you wouldn’t know it by how this game started. Giannis came out and was a monster early, making it pretty clear he was gunning for MVP on the national stage. It sure looked like he was well on his way

and for most of the first half Team Giannis has a comfortable lead. It didn’t really seem like Team LeBron was all that into it at first, and that’s really how these games often go. Each side gets to do their thing and go on their runs, and then despite whatever the lead is, as the game goes on we usually find ourselves with a close game on our hands so they can both try down the stretch. That’s exactly what happened here. Team Giannis had a nice lead into the third quarter, but then it became Dame Time real quick and he started raining threes

It was right about here that things started getting good. Once Team LeBron made up their deficit both sides started playing for real and the last 15ish minutes of this game were pretty awesome to watch. Each side had their moments, like Dame’s bombs and then Steph’s four point play

The run by team LeBron in the second half really was no joke. They put up 96 points and Kevin Durant walked away with the MVP after putting up 31/7 on 10-15 shooting

It seemed like Team LeBron couldn’t miss, and most of the damage wasn’t even done by LeBron. It wasn’t the best showing from but LeBron was able to recreate that famous lob with Wade which was nice for nostalgia purposes and then another one from Kyrie

but the facts are he was a -3 on the night and only had 19 points. You could argue he had to be bailed out by his teammates to avoid the embarrassing loss. Not the best recruiting pitch I’ve ever seen.

Overall this All Star Game game was what I was looking for as a fan. Sure it would be nice if they went 100% every second of the game, but all I’m looking for is some sweet dunks, entertaining runs, and tons of points. That huge second half run by Team LeBron fit the fill, it got good heading into the fourth which is all you could want, and in the end Kyrie didn’t get hurt which is truly all I really care about. I now look forward to all the nonsense that will be overanalyzed following this game, who was laughing with who, what pairings looked great together, you know the basics.

Now all that’s left is trying to survive until the real games start back up again. With this being the final race until the playoffs, that’s not going to be easy.