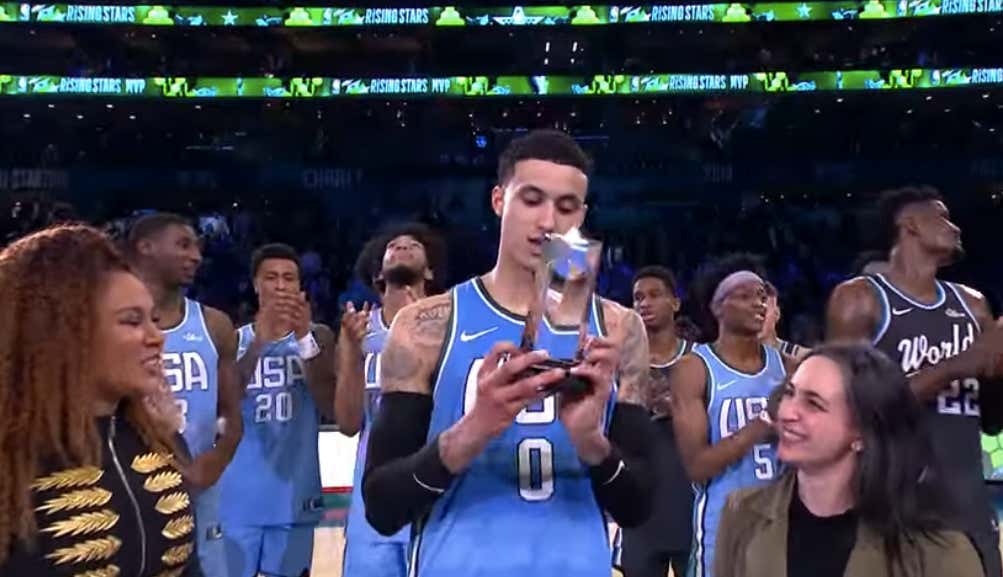 Man I bet the Pelicans feel stupid now. They could have had the Rising Stars MVP on their roster had they just listen to Magic Johnson last week. No wonder Dell Demps got fired today, he passed on MVP talent. After back to back losses for Team USA they finally came out on top in this event, much like a certain blogger predicted they would when the rosters were first announced. Despite being a fake game where everyone doesn’t really try all the time I found it actually lived up to the hype. With a final score of 161-144 there certainly was no shortage of offense which in an All Star game is all I’m really asking for. Give me awesome dunks and a ton of points. I’d say this game delivered in both areas

For Team USA they not only had the MVP performance from Kuzma, but Trae Young was also pretty dominant off the bench with 25/7/10 of his own

then you had Jayson Tatum with a decent 30/9 as well. The big question for this roster heading in was would their shooting be good enough, and 21 3PM later I’d say it held up pretty well. I was surprised that De’Aaron Fox finished with just 2 points but he filled his role as a facilitator perfectly, handing out 16 assists which was by far the most for both sides. Team USA never finished a quarter without a lead and it’s pretty clear Kyrie Irving might be the best offensive coach in history

Luka was relatively quiet although his no look alley oop was sweet, but their shooting which was supposed to be a strength let them down as they shot just 30% from three and the 19 TOs certainly didn’t help either. I can’t believe Simmons didn’t attempt a three in this fake game, especially since he was practicing them earlier in the day

All in all, the Rising Star Challenge was the perfect way to kick off the weekend. Congrats to Lakers fans on being able to brag for a few weeks about the Kuzma MVP, I’m glad that will distract you from the fact that your team stinks.