Say what you want to say about crackheads and drug dealers, but they sure are a resourceful lot. I mean turning a knife, an old crutch, some duct tape, and a string into a murderous trap is nothing short of spectacular. I don’t know if protecting your precious stash of pow/smack/whatever the kids call it these days opens up parts of the human brain that are untapped for us common folks like me or the fine people of this residence are the Bear Grylls of trap houses. But that rudimentary killing machine is something not even that sick fuck Kevin McCallister would dream of mounting and he had two people that he knew were trying to break into his Silver Tuna house.

However, that knife trap flying down wasn’t even the craziest part of the video. It was the guy that went up and measured where exactly he would have been hit by the knife if he didn’t notice the trap. 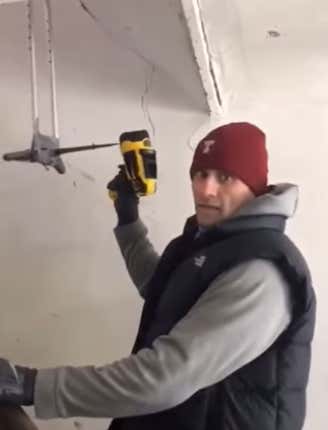 Uhhh hey guy, do you think the crazy fucks that lived in this house may have rigged up a second flying knife trap in case the first one didn’t take care of all the intruders? I mean the aforementioned Kevin McCallister had two flying paint buckets in Home Alone and even upgraded to adding a flying steel bar to close things out like Mo Rivera in Home Alone 2.

Once you see that first booby trap, you leave the premises immediately. That’s just Day 1 stuff from anybody that has ever watched a Home Alone, Indiana Jones, or Saw movie. And if you haven’t seen at least one flick from any of those franchises, you probably deserve to die a gruesome death in an old crackhouse.

FRIDAY BONUS QUIZ GAME: Which city did this take place in?

And the answer is!!!

Fly knife traps flyyyyy on the path to an intruders necccccck!