The title of this blog is not ironic.  This will be filled with shit only boxing fans might like.

So if you’re a fan of motorsports and/or black leather gloves, feel free to turn away after this pandering GIF…

The biggest news this past week in the boxing world was the announcement that Anthony Joshua has agreed to fight Jarrell “Big Baby” Miller here in the states on June 1st.  It’ll be Joshua’s first fight in the US, and it seems he was reluctant to leave the comfortable confines of Wembley to face Miller in Madison Square Garden. 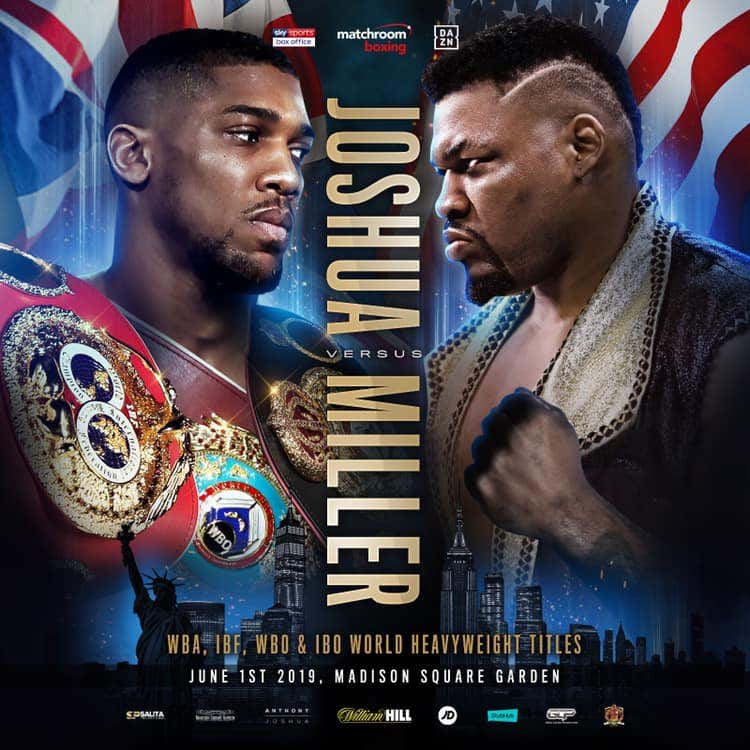 Joshua will be a heavy favorite in what could be a potential easy night for AJ, however, any slight slip-ups against Miller will result in an even bigger backlash against Joshua’s camp.

I like Joshua, but if you look at the distances he had to go in his last 4 fights – 11 rounds vs Klitschko, 10 rounds vs Carlos Takam, 12 rounds vs Joseph Parker and 7 rounds vs Povetkin –  that is not exactly the resumé of a knockout artist.  The last time he went less than 7 rounds was in 2016 which will get people wondering- If a big oaf like Miller (6’4″, 300 pounds) can just withstand enough shots to get this thing into the second half of the fight, then maybe he’ll have a puncher’s chance.

I will break the fight down as it gets closer for the handful of people who care, but for now, it’s safe to say all the pressure in the world is on Joshua for this matchup.  It’s a given that he has to win in order to keep the prospect of a super-fight versus the winner of Wilder vs Fury alive, but he also has to win impressively in order to excite global audiences for that potential matchup.

In stark contrast, Miller is a long-shot who has absolutely nothing to lose and everything to gain. 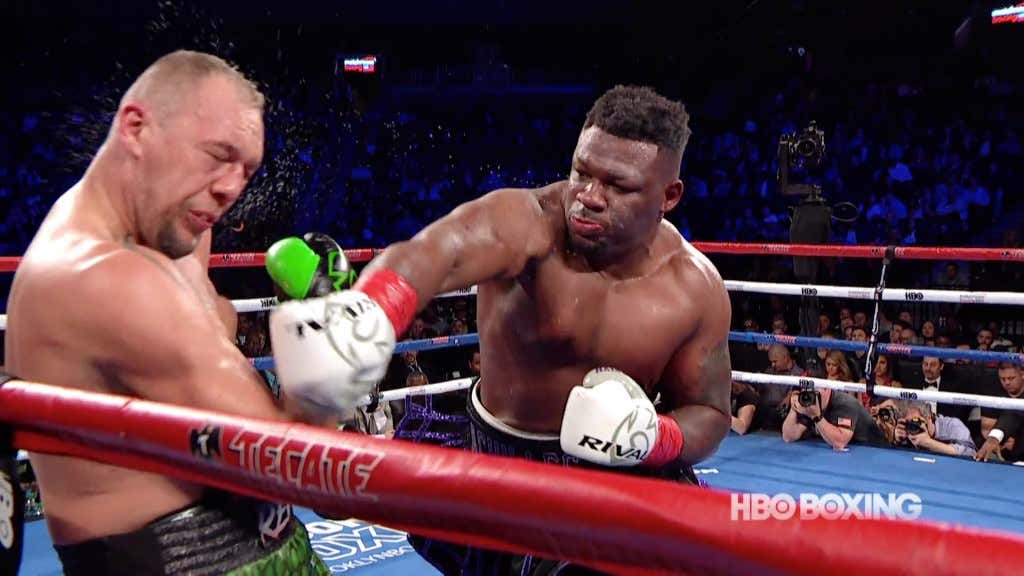 Speaking of Wilder/Fury, their camps are expected to announce the final details for their rematch on Monday… At last check, they were leaning towards May 18th as the date with either Barclays or MSG as the potential venue.  Las Vegas was the first option but Fury’s insistence on three neutral judges (following the controversial draw in last year’s fight) is contrary to the preference of the State Athletic Commission for Nevada officials.

I am going to beat a dead horse again with Miller here… And if the comment section was in full effect, I know I would get shit from people who think that Big Baby has no chance against Joshua.

I don’t necessarily disagree with that sentiment, BUT!… Let’s just say this unpolished ex-kickboxer does get lucky and knocks AJ the-fuck-out.

AND!… Then let’s just say Deontay is able to beat Tyson in their rematch.

THEN!… There’s a chance we get see a Deontay Wilder versus Jarrell Miller fight in the near future.

Why does that excite you, Large?

Well, because Big Baby used to have consensual sex with a young Asian (Filipino) broad named Telli Swift (pictured below) that Deontay recently had a baby girl with sometime in February of last year (I believe the term young urbanites would use for such a woman is “baby mama”). 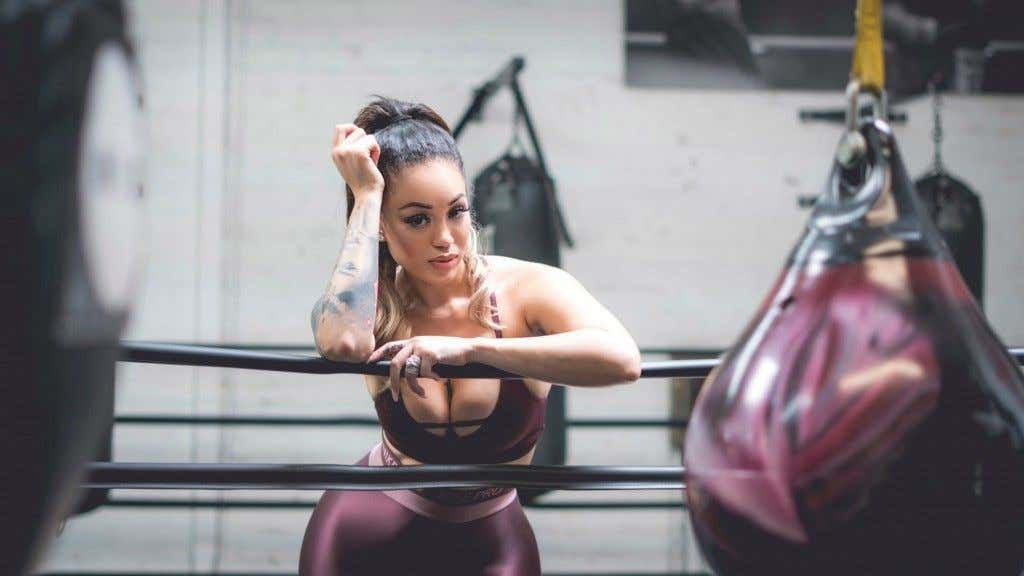 Jarrell even sent her flowers in the hospital after she pushed out Deontay’s kid… Which is a Mayweather-esque move, and makes it clear that Miller isn’t exactly a high-road type guy.

So again, here’s how I would like it to set up…  If Deontay gets past Tyson and then Jarrell miraculously gets by Joshua, we could have unifying super-bout in Brooklyn next spring… Certainly not the fight everyone wants to see, but I don’t give a fuck.  Because if everything else falls into place according to my plan, we could see a legendary storyline that culminates when Jarrell asks Deontay to smell his finger during the weigh-in and the place just fucking erupts with haymakers and gunshots.

Man, I would fucking love that.

Onto this weekend… No blockbuster bouts to speak of, but probably enough to watch if you got that itch for some combat sports.

Tonight (Friday) there are 2 cards:

On SHOWTIME starting at 10 PM, unbeaten super lightweight Shohjahon Ergashev (16-0, 15 KOs) and fellow undefeated Mykal Fox (19-0, 5 KOs) will share main event duties with a co-featured super bantamweight fight pitting 28-year-old ShoBox veteran Jesse Hernandez (11-1, 7 KOs) against WBO No. 4-ranked Thomas Ward (25-0, 4 KOs) in what will be the toughest test of Hernandez’s career.  I have never watched Ergashev fight, but he’s been compared to Lomachenko, so I might tune in for shits and giggles, even though his name is impossible to pronounce.

Tomorrow night (Saturday) we have only 1 card I care to mention:

FOX Sports has a televised undercard starting at 8 PM EST from the Microsoft Theater in Los Angeles that will feature a battle of unbeaten super welterweight prospects as sensational Sebastian “The Towering Inferno” Fondura takes on Donnie Marshall in an eight-round match that will kick off the night. The co-feature may be the fight of the night with a 12-round junior welterweight clash between unbeaten former champion Omar Figueroa and hard-hitting John Molina Jr.  And in the main event, WBA Featherweight World Champion Leo Santa Cruz (35-1-1, 19 KOs) will defend his title against Mexico’s Rafael Rivera (26-2-2, 17 KOs).

Unfortunately, this main event will not be competitive for Santa Cruz, who has already won world titles in three weight classes, but if you want to hear more about his personal story, SI (Staten Island?) produced a fairly informative spot on Leo and his family.

Enjoy the weekend… Enjoy the fights.