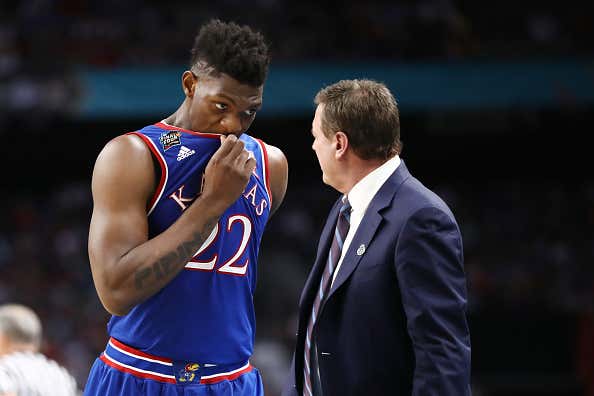 [CBS Sports] - Kansas officials are concerned that a formal NCAA infractions case may be developing into the basketball program after a recent reinstatement ruling, several sources told CBS Sports.

Sources at Kansas, those close to the reinstatement process involving forward Silvio De Sousa and familiar with the NCAA process, said a door could be opening to one of the first formal infractions cases to stem from the wide-ranging FBI investigation into college basketball.

Of chief concern to Kansas is the designation by the school of Adidas representative T.J. Gassnola as a “booster” of Kansas athletics in the De Sousa case.

Earlier this month, the NCAA ruled De Sousa must sit out the remainder of this season and the 2019-20 campaign because his guardian received money from “a university booster and agent.”

Well, chalk this one up to something new. I mean this whole investigation is going to be new because the NCAA is now allowed to use information from things such as a court case. But, now we’re using a trick theory essentially.

Kansas tried to get Silvio De Sousa eligible. Silvio De Sousa should be eligible. But, the NCAA is trying to prove a point that players or their families getting money is some sort of massive corruption and a no-no, because the NCAA wants the money.

But, now this is sort of a different investigation. The NCAA had Kansas use a hypothetical theory which then put Gassnola as a booster and an agent. That could lead to a whole different investigation depending what the NCAA knows from the FBI investigation. More importantly that means we could see massive sanctions or violations from Kansas because of that and De Sousa playing last year – a Final Four year.

I’ve said it before I think this entire investigation is a joke. It shouldn’t be a crime and the NCAA is trying to change the wrong thing. It’s not some dark underbelly like they keep saying. It’s showing that we need to redefine what amateurism is and not keep rules from the 1940s around. That said, I am curious to see what the NCAA does during this whole thing. We have major programs and names involved.