Today the White Sox had a radar gun challenge and obviously the Chicago office sans Eddie took part in it because Eddie doesn’t truly appreciate #BearWeather.

Anyways as soon as I got to the stadium I knew I was fucked.  Look I’m not an excuse guy.  But the odds were completely stacked against me.  If I could take it back I would have done a steroid cycle in the bowels of the stadium but I couldn’t get my steroid guy on the phone in time.  So now here I am, getting my good name dragged through the mud by everyone on earth.

And then Kevin, the most washed up bum amongst washed up bums at Barstool, had me on his radio show this afternoon and said I should have pulled a Costanza and “chose not to throw”.

That’s not me.  That’s not not how I operate.  I take challenges head on. I was going to do the contest rain, snow, sleet or a fucking ICE SHEET on top of TURF with a rubber mound backed up against a sand bag that wasn’t NAILED TO THE GROUND!!!

It was literally throwing on an ice rink. 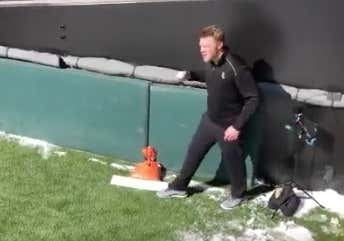 have you ever tried to throw on an ice rink?  It’s impossible.  Cleats weren’t allowed so if I were to actually get leg drive behind me I would have ate shit.

And this happened in 20 degree weather with the wind PIPING in my face.  Turn up the volume on the video below.

So here I am taking shrapnel from Dente, KFC and Carrabis and even Kayce today and I have to defend my honor.  Apparently Dente has some new nickname for me too.

And about the whole “91 with a crow hop” narrative, I was still 83 without one:

And even Carl only hit 74 today!!!  Good for 2nd best out of the 70ish in attendance!!!.  And we have video proof of him hitting 86 last summer off a mound with a stalker.  Fast forward to 2 mins in the video below:

My name has been sullied.  I will stop at nothing to fix this and fix it asap.  So in the coming weeks, I’m going to throw off a mound at UIC or somewhere, with an actual radar gun, and rehabilitate my ruined reputation.  I really have no other choice.

PS – also an open invite to the comment section or reddit page to roast me until my redemption tour.  I WILL fix this