On a cold February 13th, 2009, three dudes named Aubrey Graham, Oliver El-Khatib, and Noah Shebib hit post on their website OctobersVeryOwn.Blogspot.com and changed the course of rap history. The biggest star of the 2010’s was born. So Far Gone is the most influential mixtape of the “Blog Era”/”Internet Era” or more simply, the last 10 years. 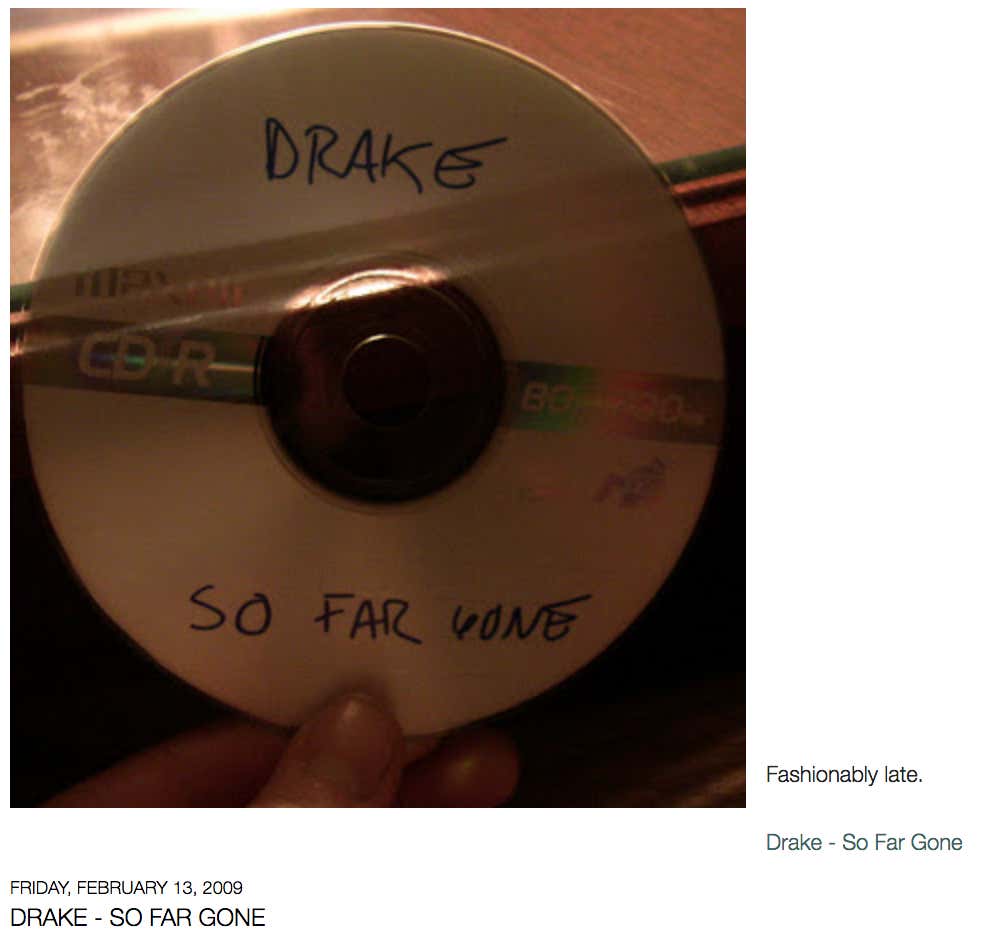 It was not Drake’s first mixtape, and you won’t find a ton of fans who say it is his best project, but without it, Drake doesn’t exist as we know him today. I’m aware that Coldest Winter off of Kanye West’s 808s and Heartbreak influenced this mixtape. Yes I’m aware that people hate Drake adapting new sounds from all over the world the past few years. Plenty of people will say “Oh so this mixtape ruined rap music” or tell me how he is the WORST for being a “diehard fan” of every team with a winning record in the Western Hemisphere, but you can’t deny that he hasn’t ran roughshod through the world of popular rap and everybody has tried to sound like him for the past decade.

So Far Gone is my favorite album/mixtape of all time because it perfectly encapsulates a time in my life. I think the best album of all time is Kanye’s Beautiful Dark Twisted Fantasy, but some things are brought into your life at a period you can never replicate. Its the reason my Dad still listens to the same Lynyrd Skynyrd and 38 Special songs in the garage every weekend. The shit you listen to when you are first driving around on your own gets imprinted into your brain. So Far Gone is very 2009. I promise you I say that in the kindest way possible. I fricken loved 2009 and it was the beginning of my conscious life as an adult. Pop culture was in an interesting era of awkward confidence. Watch these behind the scenes videos from the days surrounding the mixtape’s release, what a weird time.

Listening in 2019 with a critical ear is sure to elicit some eye-rolls on some of the lines. “My delivery got me buzzin like the pizza man” might remind you of the place Trent Ryan used to live (CORNY) as an adult, but as a 17 year old kid, it was cool as shit. Turning down the music like “Because the pizza man buzzes when he gets there! Dude do you get it?” Drake was so cool at the time for me and my gang of not-self-aware friends. Maybe because the internet hadn’t evolved to a point where everything was viciously picked apart yet or maybe because at 17 you think the world is as big as your hometown.

This was way before Drake The Type memes and before the controversial children. It was a time before endless social media scrutiny where things get chewed up and unable to enjoy within 24 hours. It feels like this era was the last fringe of what was purity. The last era of rappers that went to school before the internet was in everyone’s hands. You didn’t blow up and get famous off of Soundcloud links or rainbow hair, you had to find Kanye coming out of a radio station and freestyle for him like Big Sean, or make beats for Jay-Z.

The story of Drake getting discovered by Lil Wayne is the stuff of legends at this point. Jas Prince playing him Drake’s remix of A Milli as well as Brand New, Lil Wayne calling Drake while he was getting his haircut and Drake thinking it was a prank call. In all fairness most people probably would have thought their friends were pranking them sooner than having your Blackberry actually ring because of the Best Rapper Alive. Wayne flew him down to Houston where they recorded the original Forever and Stunt Hard, and the rest is history. So Far Gone is the story of that progression from the phone call until this day 10 years ago.

This mixtape took definitely propelled Drake to the stratosphere but he was not exactly some random dude sitting in an Igloo in Canada. Drake was on tour with Lil Wayne and to a certain degree buzzing on the internet when this released. I mean the goddamn release party featured Lebron James and Chris Bosh! Rone and I went to Meek Mill’s release party for his latest album and the biggest NBA player there was Allonzo Trier from the Knicks.

Pretty unheard of for a relatively unknown rapper’s “debut”. What followed was an arm’s race to sign Drake and capitalize on what ended up being the biggest cash cow Rap has had since the man that eventually signed him. A year later Drake was involved with Rihanna and sold 500,000 in the first week with his first official album Thank Me Later.

People have been paying homage all day.

If you are lucky enough to have never heard it yet, check it out when it goes live on streaming services at midnight. Drake has seemingly sent somewhat of an olive branch to Kanye West and is “In his feelings” as one might say reminiscing on everyone who was apart of the process. There are even rumors of a bonus track being added to the release tonight. We’ll just have to see if there is anything “Brand New”.