If every game feels like a playoff game then last night felt like going down 2-0 in a series at home. Not an ideal position. It’s hard to be all the way back when you don’t show up for the first two periods. Can’t have it. Last night was an opportunity to make up ground because of what happened to Vancouver and the other teams the Blackhawks are chasing 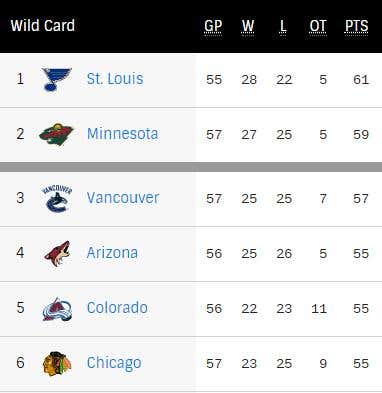 I legitimately don’t think the Blues are ever going to lose again. I don’t know what is happening and WHO THE FUCK IS JORDAN BINNINGTON!?!? So the Blues are gone. I don’t know why 6 points seems like climbing Mount Everest but 4 points feels like it’s totally doable, but that’s the way it is. It might have to do with the team that is 4 points ahead of the Blackhawks. The Wild are trash. The Blackhawks can catch them if they play the right way.

Last night was not the right way. It was obvious from the get go that the Hawks weren’t ready. It felt like the November Blackhawks

The Blackhawks weren’t going to go undefeated the rest of the way. Losing on the road against one of the best home teams in the game isn’t a shock. They can lose, but they can’t be losers. Last night the Blackhawks were losers. Having said that…if you are one of the morons who is ready to give up on the season after last night then consider yourself #banned

42% of you are banned, and 43% of you need an education because there isn’t a defensemen on the trade market who can help the Hawks. There’s such a logjam there already that the Hawks had to send Jokiharju down to Rockford.

And with that said…it’s time to bring Jokiharju back. I do think that perhaps some of the motivation for sending him down after Koekkoek was acquired was to showcase guys like Forsling, Dahlstrom, and maybe Gustafsson. There’s logic to that. Now…things have changed. The Blackhawks weren’t in the chase when Henri went down. Now they are. They need all of their best players playing and I think it’s pretty obvious that Jokiharju is at least better than Koekoek and Forsling. 2-7, 63-5, 28-56. Those would be my pairings and if that means sending Forsling down and locking Koekkoek in a closet then so be in. Now…when I say the Blackhawks shouldn’t be sellers…I’d trade Anisimov and Kunitz. I want to win this year, but I want to win BIG next year and trading Anisimov has to be apart of that equation.

I said I wanted that playoff anxiety back. Those jitters, the chills, the late nights with no sleep. There’s nothing like playoff hockey. Having said that…playoff hockey just to get into the playoffs…FUCK this. I know I can handle two months of stress in the playoffs. Riding the roller coaster of a chase is awful. I had the TV on the Hawks and then I was streaming the Wild-Flyers and the Blues games on computers. Eyes were bouncing around like I was watching tennis, not hockey. Took me forever to get to sleep. Ate a SHIT ton of candy. I used to wonder how I got so fat in my late 20s…the answer is playoff hockey. Last year I got in good shape because I started working out and eating healthy in like February because the season was over. Now I am shaping up to be shaped like an egg again. If that happens and the Blackhawks fall short of the playoffs then I think I can file a grievance against Stan and John.

I am ready to bury that game though. The Blackhawks NEED to win tomorrow night on Valentines Day against the Devils. That is a bad team. It’s back in the Blackhawks barn. If they can’t get two points tomorrow then maybe this run really is over. Maybe it was fools gold. Show up, win, force Stan to let this group push towards the playoffs.