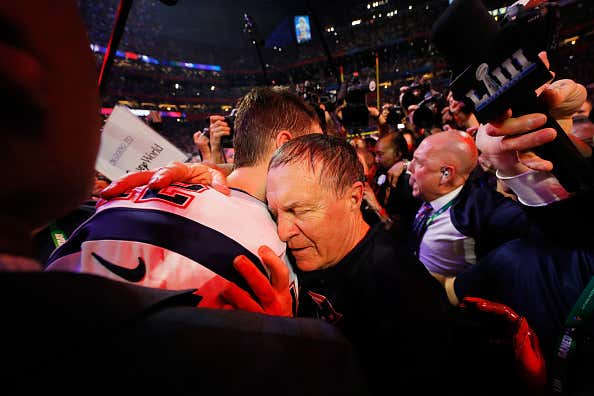 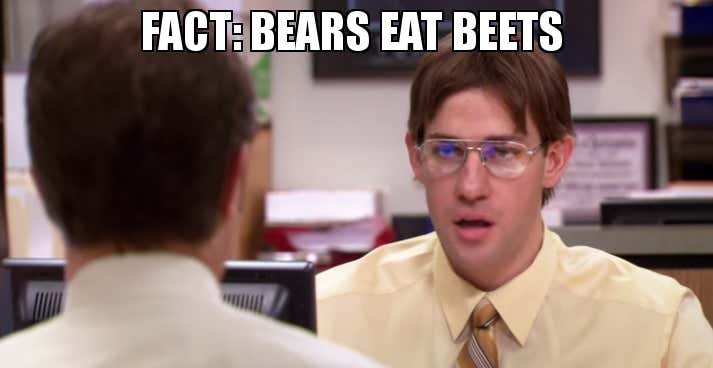 It’s give or take a week and a half since the Patriots made it a cold, hoppy, New England-style IPA six pack of unimaginable greatness. And while every adult male worthy of being called my friend has the game marked “Save Until I Delete” on his DVR, has rewatched it at least twice and is still getting raging boners from all the NFL Films Mic’d Up segments, there’s another layer to this latest win I’m just beginning to scratch the surface of.

I’ve done something similar to this in the recent past, so there might be some overlap. But these are up-to-date. And absolutely mind-bending. When you’ve been sitting with your nose pressed up against the glass of the Bradichick Epoch since it began with that Mo Lewis hit 17 years ago, you lose some of your peripheral vision. And your perspective. Like with physics, sometimes you need to look at the math to truly appreciate the miracle of what your eyes process on a daily basis in order to truly grasp its magnitude.

So feel free to share these with your friends. But don’t forget to shout them in the face of anyone who hates this team, which is scientifically proven to be even more fun. In no particular order:

Fact 1.
Three quarterbacks have won more than 167 career games, regular- and postseason combined, in the history of football. They are Brett Favre (199), Peyton Manning (200) and Tom Brady. Brady is now 237-70, which is 167 games above .500. Drew Brees is next behind Favre in wins, with 163. Meaning you could subtract the entire win total of the fourth winningest QB of all time from Brady’s total, keep all his losses, and he’d still have a winning record.

Fact 2.
The NFL’s best, most successful and likely Hall of Fame QBs among Brady’s contemporaries have been Manning, Brees, Ben Roethlisberger and Aaron Rodgers. He has as many rings as all of them combined.

Fact 3.
The greatest pitcher you and I have ever seen is Pedro Martinez (don’t @ me). Making 30-something starts a year throughout his Hall of Fame career plus playoffs, he doesn’t have as many wins as Brady, with 225 total. (via @footballfacts)

Fact 4.
Rob Parker is a nitwit. 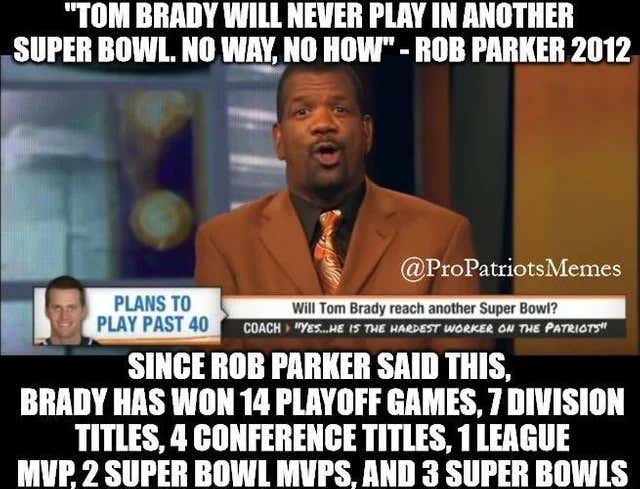 Fact 5.
Rob Gronkowski has played a season’s worth of postseason games and his production is off the charts:

To put that in perspective, Travis Kelce made All Pro with 103 Catches for 1,336 Yards and 10 TDs, against a regular season schedule played in mostly optimal weather.

Fact 6.
Brady wins when he throws a lot. Via PFT, the Patriots’ record when Brady throws 50 or more passes is 19-9, the best in NFL history.

Rounding out the 2-4 QBs all time with games of 50 or more passes:

Brady has won six postseason games when throwing 50 or more passes. No other quarterback in NFL history has more than one.

Brady has won 13 regular-season games when throwing 50 or more passes passes. No other quarterback in NFL history has won more than five 50+ passing games.

Fact 8.
Joe Montana was the unquestioned biggest winner in history pre-Brady, with a 16-7 career postseason record. Brady is 15-7 just in conference championship and Super Bowls (also via @TB_Facts). In fact, subtract Montana’s entire postseason W-L record from Brady’s 30-10, and you’re left with 14-3. Terry Bradshaw, the only other QB with four Super Bowl rings besides those two, was 14-5. So the GOAT’s record is better than both of the other 4-ring QBs combined.

Fact 9.
In a head-to-head against the previous best winner of all time, Brady laps Montana. In spreadsheet form:

Fact 10.
Stephen Gostkowski is now tied with David Akers for the second most postseason field goals of all time with 39. No. 1 all time with 56 is Adam Vinatieri. So the two kickers over both halves of the dynasty are about to be at the top of the list.

Fact 12.
Julian Edelman now has the second most postseason receptions in history behind only Jerry Rice. Rice got his 151 catches in 29 games, an average of 5.2 RPG. Edelman’s 115 have come in just 18 games, or 6.4 RPG. Meaning at his current pace, Edelman would pass Rice for the top spot in 5 1/2 games.

Bonus Fact:
The best number for the Patriots against the Rams is 24.