TALK THAT SHIT 6-TIME CHAMP! TALK THAT SHIT!!! Nothing like a subtle reminder that Michael Jordan is a super competitive psychopath. I know people will say he was just joking around or avoiding actually answering the question. But I remember watching that sick son of a bitch ripping out my guts along with the guts of millions of other Knicks fans and a sad Patrick Ewing every Spring. That dude was always sick in the head and you know hearing the GOAT comparisons with LeBron has to drive him nuts. If you really want to get Info Wars with it, you can see MJ grabbing his ring finger once he was asked about the statistical accomplishments of two other great players that haven’t won a title. That’s the move of someone that said he became friends with some of his rivals just to get inside their heads and has tried to fill that competitive void on the basketball court at every big stakes poker table and golf course in the country. I don’t know or really care which is tougher between those two accomplishments in this current NBA with all the rule changes (which definitely pisses MJ off as well). I’m just happy that sick fuck isn’t haunting my team’s dreams anymore. If only James Dolan didn’t become our boogeyman right after MJ retired.

Also it has to be mentioned just how ridiculous it is that Sam Presti drafted both of the guys in that question as well as the reigning 2-time Finals MVP in back-to-back-to-back drafts without even having the number 1 pick. I would get physically ill seeing this picture and that is coming from someone that gets 90% of their happiness as an NBA fan from Photoshops of players that will never sign with my team. 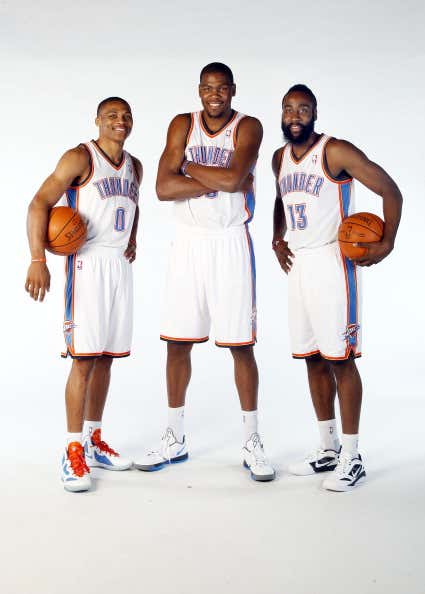