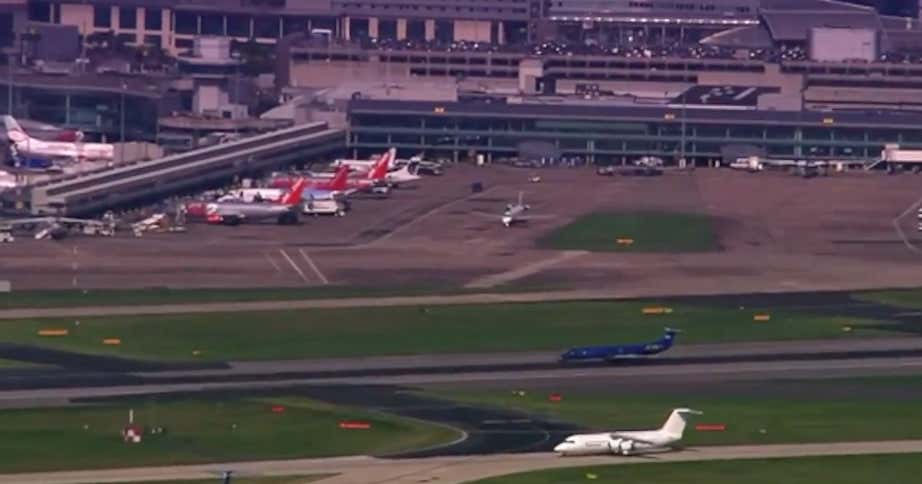 A half-naked woman ran around a South Carolina airport Sunday, which caused flights to be canceled and the airport to be temporarily shutdown, the Florence Morning News reported.

The Florence County Sheriff’s Office reported an “indecent exposure incident” occurred after noon when “a partially clothed woman sprinted through the airport’s runway and into a nearby wooded area,” according to WMBF.

Two American Airlines flights were canceled, one scheduled to land in Florence and another departing from the airport destined for Charlotte, WPDE reported.

Florence Regional Airport Public Safety Officer Lee Marsh said the airport was closed for more than two hours while law enforcement searched for the woman who was wearing only underwear, per the Florence Morning News.

As flights circled overhead, the woman was eventually found by K-9 units hiding in a storm ditch, the newspaper reported.

Listen, it SUCKS to be stuck in an airport for any longer than you have to be. When you find out the stupid reasons for the delay it makes it even worse. Well, if you’re stuck in an airport for two or more hours, a naked girl running around causing chaos isn’t the worst of reasons. That’s what happened in South Carolina the other day with one bat shit crazy bitch.

The woman was only wearing underwear as she caused havoc at Florence Regional Airport. The airport was temporarily shutdown and flights were cancelled as they tried to track down this woman. Now we don’t have an age, or any description of her. There are no pictures, although for research and scientific purposes I’m going to need to see those when they get released. Somehow in the year 2019 no one took out their phone and took a video or picture of this going down. Idiots!

So how did they kidnap this elusive fox?

As flights circled overhead, the woman was eventually found by K-9 units hiding in a storm ditch, the newspaper reported.

A good old storm ditch. She deserved a better fate than that. The good news is that charges are not expected to be filed. Instead she was sent to a hospital for mental evaluation. Probably for the best.