KOMO- A young woman was arrested after driving off the road and nearly hitting a group of people who she says threw snowballs at her car. Cellphone video captured by a witness shows the encounter Sunday night on Capitol Hill in Seattle. A group gathered at East Bellevue Avenue and East Thomas Street to play in the snow, and witnesses say a snowball fight broke out, with snowballs flying across the road.

Wieser says a blue jeep initially drove past the group, then returned 5 or 10 minutes later. That’s when the driver pulled over and started yelling that they had hit her car with snowballs.

Seattle Police confirm they arrested the woman for Reckless Driving and DUI. They could not confirm other details in the case Monday. The King County Prosecutor’s Office did not charge the woman Monday, saying they’re waiting for the results of a toxicology report.

Ahhhhh, nothing like some outdoorsy fun in the cold weather and trying to make lemonade out of the lemons that Old Man Winter dumps on us. Sledding, snowball fights, and attempted vehicular manslaughter followed by some hot cocoa! I mean I understand getting upset when you are the target of a snowball brigade. There is something woven deep inside the Human DNA that instinctively makes getting hit by snowballs seem like the most unpleasant thing on Earth instead of just some rolled up fresh powder. It’s the reason getting hit by a snowball ambush feels like a real life Nam situation to people.

However, turning a winter wonderland into Vice City by weaponizing your car is probably not the most rational reaction to you car getting hit with a couple thousand rolled up snowflakes in a light-hearted snowball fight. Saying you weren’t actually trying to hit anybody while driving on snowy roads probably wouldn’t fly in court if that Jeep actually connected with anybody.

Then again, this should be a lesson to all the people throwing snowballs at random cars. You don’t know who is behind the steering wheel. It could be a big softie idiot like me who would honk each time a snowball connected with my car, it could be this woman with a short fuse and a long back tattoo 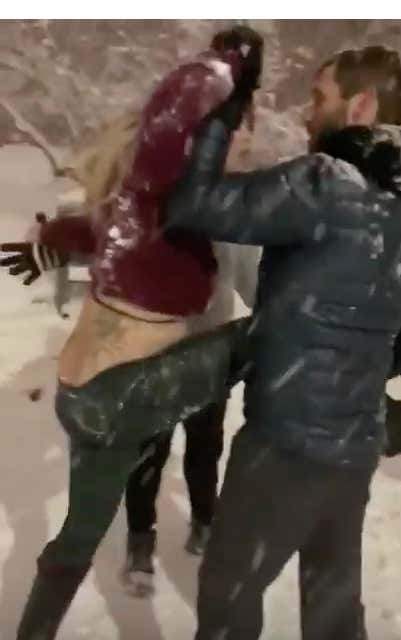 Or it could be this crazy son of a bitch.

Great, now all I can think about is what this guy would do if someone pelted his car with exactly one (1) snowball.

Also for what it’s worth, if the snowballs are actually ice balls forget about everything I just wrote and go for those fuckers throats. Ice balls are no joke and anybody that throws them deserves whatever fate is coming for them.