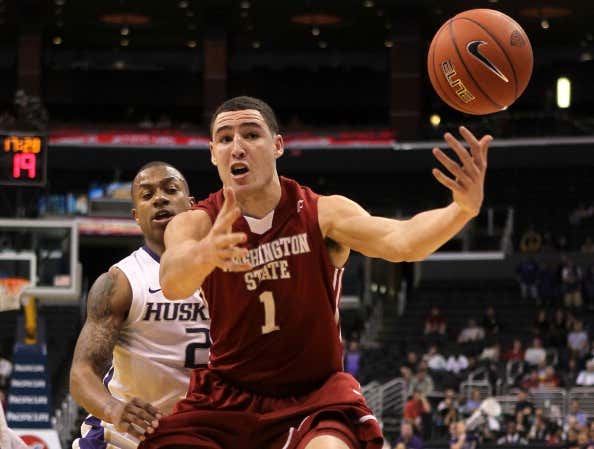 [The Athletic] - Daven Harmeling, guard: A lot of people on their recruiting trip want to go out and have a good time. Klay had none of those desires.

Lodwick: We ended up at somebody’s apartment playing “Rock Band.” He was convinced he could beat “Green Grass and High Tides” on expert on the guitar. We sat there for like an hour trying to watch him beat it. He couldn’t beat it, but he was just convinced that he could, and he was really, really competitive and really dialed in.

Thompson: Never could beat it.

This is the most Klay Thompson shit ever and why I absolutely love the dude. Sure, watching him shoot is a delight too. But, this is it. Having zero desires to go out and have a good time on a recruiting trip. He would have fit in with Jalen Rose:

I just imagine 17/18 year old Klay Thompson hanging out in Pullman. Probably a million parties going on. People just ready to start hanging out and having a Friday night. Maybe hit up a house party. Maybe go to one of the local bars where you’re treated like a star. Nah, just give Klay some Rock Band and get the hell out of the way.

Actually, you may want to give him some fireworks too:

Johnson: I remember the fireworks story. My wife was like, “Oh, my gosh. Klay loves fireworks.” We couldn’t get him to leave! They were shooting them off, and then we shot them off for another hour after the fireworks were done. He just loved that kind of stuff. And a lot of that was Pullman, a place where you had to make your own fun.

Lodwick: We would get these clementines and we would put fireworks in them and call them clemen-ades and we’d drive around town and throw them around in Pullman.

Thompson: (Clementines) make a great firework enhancer. You just put a Black Cat in them, and it’s fun to blow them up.

And now I’m in tears laughing about Klay Thompson being giddy about blowing up fireworks in some goddamn clementines. You know he’s still doing it today. Just running around the Bay Area with a handful of clementines and a handful of fireworks.

I suggest reading the whole article. It’s pretty good look at Klay and how he ended up at Washington State, which is still one of the weirdest teams to go back and look at. You had Tony Bennett, Klay Thompson, Aron Baynes, Brock Motum and Derrick Low.

Put this on Klay’s Hall of Fame plaque if he gets there:

Capers: My friend was like, “So you mean to tell me that Klay Thompson, an A-list NBA player, just played Nintendo64? That’s all you guys did?” And I was like, “Yep. That’s what it is.” Video games, fireworks, Klay’s all about it.