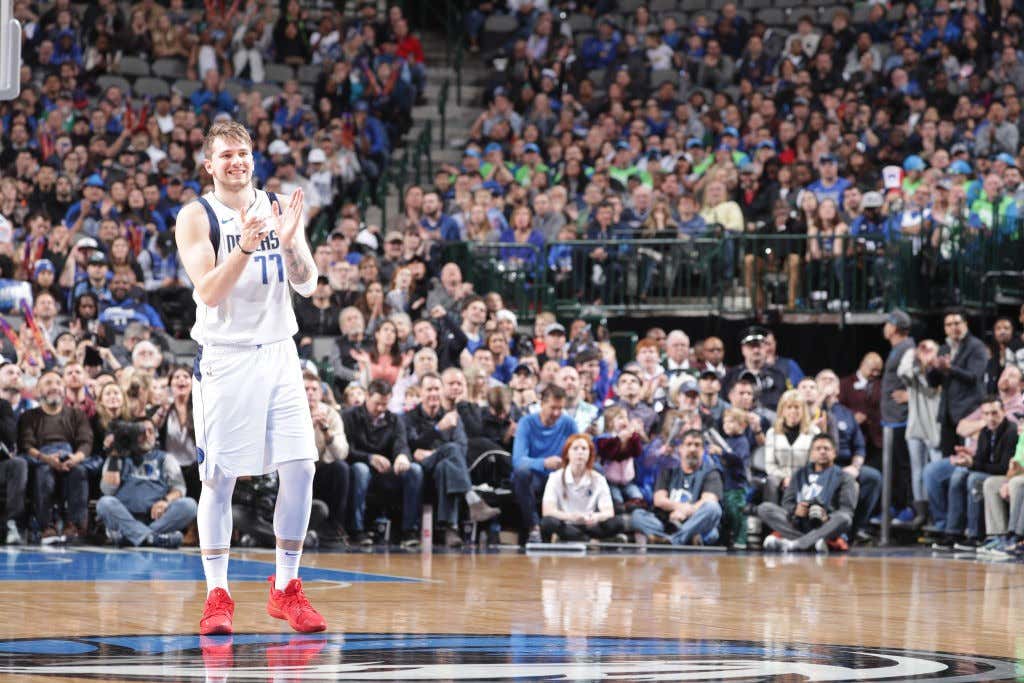 Good morning everybody happy Monday and welcome back to another edition of Last Night In The NBA where we bring you up to speed on everything that went down from the night before in the Association. As the first Sunday without football there was a lot of pressure on the NBA to deliver the goods. In my opinion it delivered with close games, high end of game drama, a beatdown of the Lakers and a whole lot more. It’s Monday, there’s no chance you want to start working just yet, so why not kill some time this morning with quality basketball highlights? What a beautiful idea. If you missed the action yesterday, here’s what happened.

All season, the Mavericks have told us one thing. They are a different team when they play at home. Hell, if they were even average on the road they’d probably be in the top 8. The Blazers coming into town winners of 4 of their last 5 this was already going to be a tough test for the Mavs. Little did we know it would ultimately become the most improbable win of their season. Allow me to explain.

You see there’s one important thing to know when it comes to the Blazers. If they had a lead going into the fourth quarter, they’d never lost. A cool 33-0. So one would assume that with a 14 point lead heading into the fourth quarter that the Blazers were coasting to their 34th win of the season. They pulled away in the second and third quarter behind a huge surge from Damian Lillard

and a very efficient 18/10 from Jusurf Nurkic

This was a team that had 92 points on 56% shooting entering that final quarter. They then turned in a performance not seen since the Celtics collapse against the Clippers. They scored just 9 points in that final quarter on 18/0% splits and 7 TOs. You may not be able to understand what that feels like for Blazers fans but as someone who just experienced a 12 point quarter on 18/0% splits and 4 TOs I can tell you it fucking blows. Dame and CJ with a 1-8 4 TO finish, I can certainly understand the shock a loss like this might have for Blazers fans. You get a streak up to 33-0, by that time you’re considering any lead after three an automatic win.

They now find themselves 3 games back of OKC for the 3 seed and just 1.0 games up of HOU for the 4 seed. Things don’t get much easier with @OKC up next.

Fair to say he put this team on his back down the stretch, Luka had 13 points in the fourth including 8 of their last 12. Once again we saw him rise to the occasion and be that clutch guy where even if he was forcing a little bit at the end you love the fact that he’s certainly not afraid of the moment. He played every second of the fourth, went 5-9 from the floor and the rest is history. As incredible as Luka may have been he didn’t pull this off alone. Aside from Luka the Mavs got great production from Tim Hardaway Jr who had 24 points, 14 of which came in the second half.

The Mavs have now won 3 of their last 4 and sit 4 games back of the final playoff spot. Maybe a win like this will end up doing more harm than good if they can’t make the playoffs, but how can you deny yourself some Luka magic. Screw the percentage points give me that all day.

Coming in riding high off their prayer upset win against the Celtics, boy did the Lakers come out and get their asses handed to them. It didn’t start out that way when both teams made it pretty clear there was going to be no defense played in this game, but that lasted about a quarter and a half until the Sixers flexed their muscles, got a little separation, and things ballooned from there.

For the second game in a row this starting five turned in one hell of a performance. The first time the new look Sixers made an appearance it was JJ Redick with a huge 34, well in this one that was Embiid who had 37/14, then Tobias Harris with 22/6/6 on 9-14, JJ Redick with 21, Butler with an efficient 16, and Simmons went 3-13 and it made no difference whatsoever.

This is a team that finished with 57/50% splits 12 3PM and went 19-22 from the line. I know the Lakers defense isn’t all that great but don’t let that take away from how well the Sixers played here. Even the bench chipped in with 40 points on 18-31 shooting. They never had a quarter under 33 points, and things were so bizarre that Ben Simmons even took a real three

The Sixers now ride all the momentum into the world into Tuesday’s matchup against the Celtics, which will be the first time they’ve played BOS at home this season. Pretty big tie breaker game as the Celts won the first two meetings. The standings are so close this could be a H2H matchup that really matters come Spring.

For LAL, Kyle Kuzma came out and was legit unconscious to start this game with something like 23 of his 39 in the first quarter

LeBron had a pretty quiet near triple double

but unfortunately the Lakers really struggled in the non LeBron minutes and by the time he came back PHI had too much momentum. The defense disappeared after things started to snowball and before you know it we had LeBron leaving the game early

With the Kings also winning the Lakers now trail them by 2 games just for the 9th spot, and trail the 8th place Clippers by 2.5

If this was a preview of the type of battles we’re going to get between DeAndre Ayton and Marvin Bagley III, well then we have a lot to be excited for. Bagley missed the first two meetings against PHX and boy did he ball out in this matchup to the tune of 32/7 on 10-15 shooting off the bench

Not a bad performance going up against the #1 pick. The Kings led wire to wire and end their homestand an impressive 5-1, and don’t let the final score fool you. This was basically a 20 point game at the break and the Kings were never really challenged. Seven total players in double figures, solid guard play combined with Bagley off the bench was more than enough to beat PHX who as we know is doing their best to keep pace with the Knicks/Cavs

For PHX, as you can expect from a team that’s 4-25 on the road, they weren’t exactly favored in this game. They got their usual strong performances from both Devin Booker and Ayton, who combined for 43 of the 107

This loss brings their consecutive total to 14 games, which sadly isn’t even the longest active losing streak in the NBA. I feel for the Suns on that one, all they want to do is lose and they can’t even be the best at that. Something tells me their top 3 standing is safe though.

Not the sexiest matchup on paper, but for a Magic team that’s won 2 in a row and finds themselves within striking distance of that 8th seed it was an important road win. A big 37 point second quarter got them their separation, they shot the ball well with 13 3PM and took care of the ball with just 8 TOs. It’s not often the Magic score this many points, I guess it’s just one of the perks of playing the Hawks, and their starting 5 was great going a combined 30-55 from the floor

I thought it was surprising that the Magic didn’t move Vucevic at the deadline since he’s for sure not in their future plans, but it’s clear they saw the path to the postseason instead and are really going for it. They trail DET by just 1.5 games for the final spot, so it’s not entirely out of the question.

For ATL, they still have a ton of work to go in order to get into the top 3 tanking spots, they trail CLE by 7 games for that final spot. That may be too tough to overcome but someone like CHI is just 5 games away in 4th. More games like this is and that may be a realistic goal. They’ve lost three in a row which is a step in the right direction, but honestly there isn’t really anything worth showing from their performance, it was mostly just ‘blah”

That’s why instead, you should watch this little girl break it the hell down. This was more impressive than anything we saw on the actually basketball court

But here’s the thing. The Heat didn’t quit! Oh no, the Warriors were actually at risk of losing this game after they threw away an inbounds pass with like 50 seconds left and went down three. Naturally Kevin Durant came right back down and hit a dagger three to tie things up and eventually they pulled it out but it certainly wasn’t easy. I give credit to the Heat, often times when we see a team get bukkaked like that and blow a big lead at Oracle, they fold. This team kept on challenging the Warriors and that was impressive.

For MIA, it was largely in part due to the career night from Josh Richardson who had 37 points and 8 3PM

but as we know if you want to beat the Warriors in their own building you’re going to need some help, and both Dion Waiters (24 points)

and Justise Winslow (22 points) were there to provide that secondary scoring. Hell, they even got some Vintage Wade for moments in what will be his last appearance in Oracle Arena

With 18 3PM as a team and 45/41% splits the Heat certainly had their chances, I was convinced this Waiters game winner was going to fall

Unfortunately it didn’t, and the Heat now find themselves outside of the top 8 for the first time in a while. They’re in a bit of a slide right now losing 5 of their last 6 and they go @DEN/@DAL/@PHI up next so it’s not as if things get any easier to end the month.

And that’s it! You’re now all caught up on everything that went down last night in the NBA. We’re back tonight with 9 more games so if you for whatever reason can’t watch just make sure to check back in the morning and I’ll bring you up to speed on what you missed. Have a great Monday!