Now this is what I’m talking about. Pettiness and a fight a year in the making. That’s what we’re dealing with here. So as Rob said, last year during the whole FBI investigation into college basketball Colorado coach Tad Boyle made some comments about USC (and Arizona). Here’s what Boyle said last year:

“Absolutely there is, and it’s ironic we’re playing Arizona today,” Boyle said. “I’ve got great respect for Sean Miller and the kind of coach he is. They recruit very, very well. USC has recruited very, very well. The two most talented teams in our league from top to bottom are USC and Arizona.

Then after those comments, Enfield decided to piss off Boyle:

Then we had last night happen. Let me tell you what. I’m HERE for this. Give me a Tad Boyle vs Andy Enfield rivalry. Give me the assistant coaches getting into scraps during the handshake line. Give me this guy stealing the show: 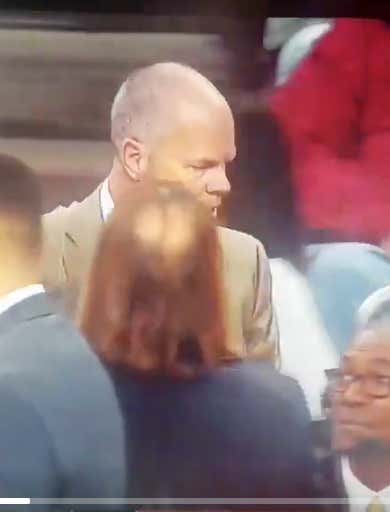 Seriously, this hair is outrageous. I can’t stop looking at this guy. He does an A+ job of coming in and breaking up the scrap. He comes flying in from the side.

I love Boyle’s response about this all too:

“I was a little bit too emotional and I said something I meant to say to our team, and I think they took it like I was saying it to them. That was my fault,” Boyle said. “I meant no disrespect by it. But this game meant a lot to me. I don’t forget what happened last year with the timeout. But I have a lot of respect for their staff and their assistants. I apologized and I told them I meant no disrespect to their team.”