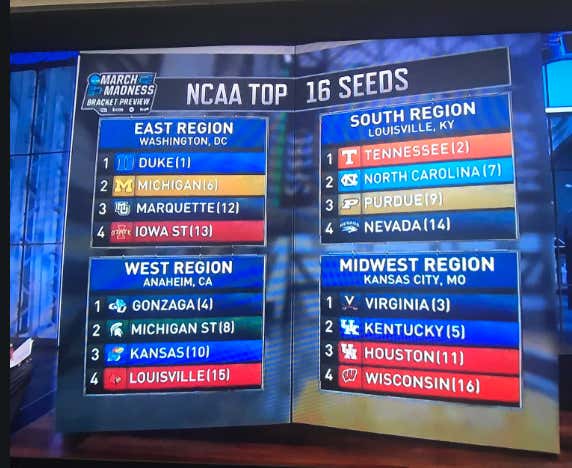 Today was the 3rd year in a row that the NCAA released the top-16 bracket reveal. I think it’s an awesome idea as it drums up more interest with a month to go in the regular season and we get some transparency as to what the committee is looking at. I wish they did it one or two more times during the season similar to the College Football Playoff show just to see how teams are being judged. Let’s get into my reactions:

Here’s how the bracket looks:

Alright let’s get into some quick reactions here.

– I’m a bit surprised that Purdue is the top 3 seed. I had no doubt they’d be in, but seeing they are that close to a 2 seed with a favorable schedule down the stretch means they can get onto that 2 line. This is the typical don’t look at the record look at the resume team. You’d be surprised that 16-6 means you’re the top 3 seed, but they have the wins and really just 1 somewhat bad loss vs Notre Dame.

– I know a lot of people are saying that Kansas shouldn’t be on here. Or at least people in my mentions were saying they were surprised to see Kansas here and where they were ranked. I disagree. Yes, they are struggling right now, especially on the road. But, that’s a pretty decent resume with wins over Tennessee, Michigan State, Texas Tech, etc.

– I don’t have any complaints with who got in or anything like that. I thought there were about 19 teams (these 16 + Villanova, Virginia Tech and Texas Tech) with a real case to be on here. I don’t think anyone should really be outraged over this.

– As a Kentucky fan I’d like to sign up for this in a second. Give me this right now please.

– The NET isn’t exactly the end all, be all. Virginia Tech is No. 10 in the NET and didn’t make it. Kansas is No. 20 and is a 3 seed. It’s a tool for sure, but the committee is showing there’s value elsewhere.

– I’d probably have Louisville a bit higher than 15. That one is a bit shocking. I probably would have had Nevada at 16 out of this group, but again, the committee has a different mindset. Here’s what we have 1-16:

-I can’t fucking wait for March.