Welcome back to the Barstool HQ Week In Review. Obviously didn’t do one last week, and did my “Dear Diary” blogs in its place. But we’re back now after a full week at HQ.

After a week of emptiness, everyone returned to HQ. The 9 people that were here last week were probably pissed that the peace and quiet was over. Personally, I was happy to get back in the swing of things. I’m very routine-oriented. As I wrote in yesterday’s Thursday Thoughts blog, my day got off to a rough start when I wasn’t welcomed back at Starbucks after a week long absence. So much for the budding friendship I thought I had with these baristas.

Shaun and Mush got hero’s welcomes when they got back to work.

Mush didn’t know it at the time, but he was in for a scorching hot week.

A Pats Super Bowl victory meant we were in for a classic Skype Rundown.

I was walking to Starbucks Tuesday morning when I saw Kmarko on the street. I yelled out “Saturdays Are For The Boys!” I like to yell that or “Viva La Stool!” when I see co-workers on the street. It’s better than awkwardly saying “hey.” By making the situation more awkward with a “SAFTB” or “Viva”, it actually makes it less awkward.

Walked in the office to see that Willie had broken the bathroom door.

Real inconvenience for me. It was my preferred poop bathroom, but I wasn’t going to go without a lock. Also I sit right next to it, so people were asking me “watch the door” while they were in there. Annoying.

In the midst of everything coming out of the Patriots parade, Marty Mush was personally calling the NCAA refs after a bad beat due to egregious officiating.

Tuesday was one of our worst Internet days in awhile, and that’s saying something. People were really getting on ABP. Riggs, typically known for mild-mannered pleasant, demeanor, was particularly irate with Pete.

Pete was, as they say, “clapping back.”

On Barstool Radio, Dave put the sales team’s ass squarely in the jackpot.

But it kind of worked out, because it did more to promote the NASCAR show than anyone expected. Can’t wait to hear terms like “dirty air,” “drag”, and “restrictor plate.”

Got in early Wednesday to record our final Laces Out with Dave, Willie, and Steven Cheah. I tried to fight back tears as we wrapped it up.

Steven Cheah was an absolute quote machine all episode. Telling Dave “I feel bad for you” and “The sweet isn’t so sweet without the sour.” He also gave us all a lovely thank you card with that picture in it. While he may seem like a sweet guy, he’s also not afraid to flame people on Twitter.

On Radio, I accidentally found myself in the middle of some Call Her Daddy drama. They’ve been beefing with Rachel Bush, a good friend of mine I know from running Barstool Smokeshows. I tried to get her to call into radio so they could clear the air. I didn’t want to be in the middle of their war.

I got myself in a deeper hole after they left when I mentioned a, what I found funny, interaction I had with Alex at the Christmas party.

I want NO smoke with Daddy Gang. They are the most intimidating group on the planet. I want nothing more than to be their ally.

Bozoian was limping around the office all day with his cane like a fucking wimp. Grow up.

But seriously, I’m a little jealous of him. I don’t mind having a minor, physical injury. Gives you a lot of excuses and people give you sympathy. I don’t want like a broken leg, but a tweaked ankle or something isn’t the world thing in the world.

On radio, I got reminded by a caller that I promised to drive on a highway for the first time before turning 23 on April 29th. Really backed myself into a corner there. As Big Cat would say, it’s a “future me problem.” I’ll get to it eventually. I just don’t have a need to right now. Also I’m not really a good driver. I get distracted easily and don’t have a ton of common sense. So I’m really just protecting the world.

Relatively quiet day at HQ today, as most Fridays are. I thought about doing an adventurous lunch today and ordering from somewhere completely different. But I had a bacon egg and cheese in the morning so was too full. Didn’t want to waste an adventurous meal when I wasn’t that hungry. Oh well.

They did a Skype Rundown for Barstool Gold. It was great seeing a classic Rundown like that. Tensions were immediately hot from the start, as we’d expect.

I then shot my next video. I wouldn’t say this has as much viral appeal as Vape God or ASMR. It’s like how actors do a “one for us, one for them” mode. This video is more within the Barstool world. Don’t think I’ll end up on SNL. 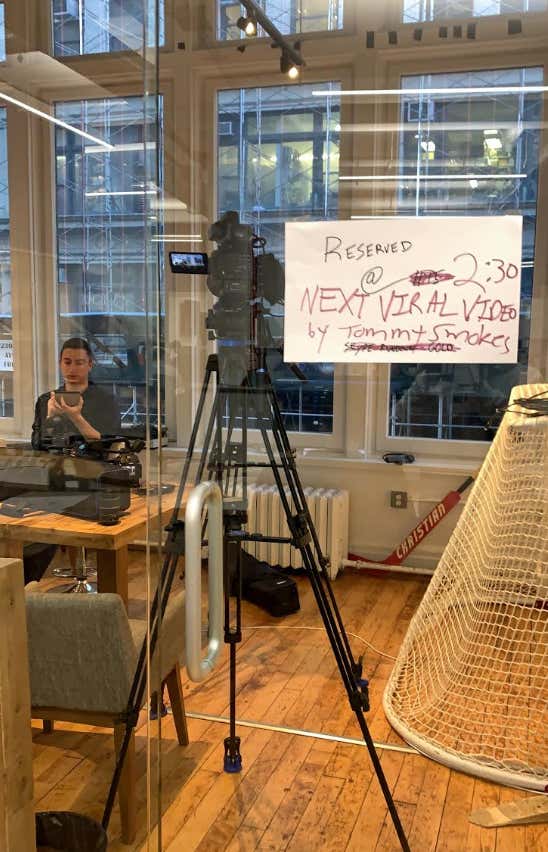 Be on the lookout next week.

That’s a wrap for the Barstool HQ in review. Have a good weekend everyone!