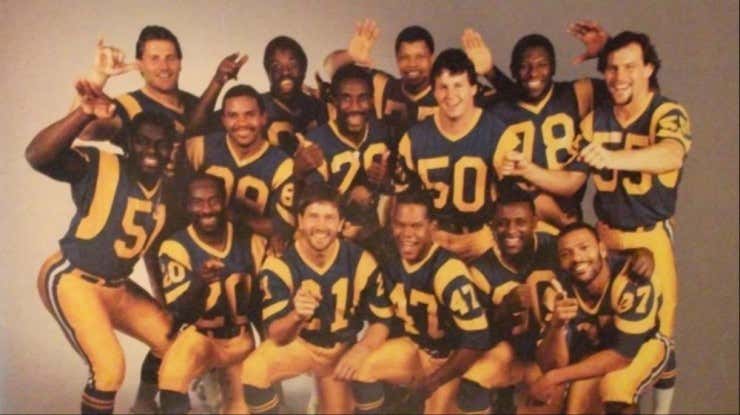 Somehow in all the focus on the Super Bowl over the last couple of weeks, I got too focused on the details. Too deep down the rabbit hole of the real-time story lines. And I completely dropped the ball on the truly important, Big Picture stuff. What that game meant in terms of American culture. Specifically one of the greatest aspects of American culture:

It was a magical time. When every rap song was structured the same way, with every line like “My name is [fill in blank] and I’m here to say/ I like to [fill in blank] in ev’ry way,” etc, etc. And where local TV news “celebrities” were utterly lacking in self awareness or dignity. And no entedre was so double you wouldn’t make a sexual innuendo the title of your fight song. You kids who have grown up in an era of slick, high quality, 16:9 ratio hype videos have no idea what you missed out on.

And no two franchises ever produced worse anthems than the 1986 Los Angeles Rams and 1985 AFC champion Patriots.  I apologize for not posting these sooner. No excuses. Blog like a champion today. But let me make it up to you now. I’d say “enjoy,” but that can’t possibly happen.

“New England, the Patriots and We”: