So this is just one Tweet from a Dolphins fan site with a “from what I’ve been told” caveat. I challenge anyone to dig around and find something more substantive than this because I’ve been looking and came up empty.

On the surface, it seems sort of unlikely that the Dolphins would move on from Danny Amendola just one year after signing him. Particularly when he played his ass off in winning Miami’s new head coach Brian Flores two rings and almost winning him another. And the new offensive coordinator was the Pats wide receivers coach.

Then again, Amendola is due $2 million in guaranteed money if he’s still on the roster March 13th and $6 million altogether in 2019. And it’s fair to wonder if Chris Grier thinks it’s worth it for production that dropped off from 2017 to ’18, even if it wasn’t by much:

There is no doubt in my mind the Patriots would welcome Danny Playoff back. And not much doubt he’d love the chance. It can’t have been easy to watch the teammates he fought alongside for so long win a title without him after spending a year trying to catch off-target throws from stankass quarterbacks like Ryan Tannehill and Brock Osweiler.

Not to mention the prospect of getting to move back to Olivia Culpo’s hometown and what that would do for their on-again, off-again thing.

I always thought the proximity to Rhode Island – and therefore her – was a motivating factor in all those paycuts he took to stay in New England. So much so I assumed Belchick probably fixed them up as a diabolical means of fitting him under the salary cap. And clearly all three made out in the deal.

As far as the Patriots, Chris Hogan, Cordarelle Patterson and Phillip Dorsett are all Unrestricted Free Agents. Hogan had trouble gaining any separation against Marcus Peters last Sunday and clearly has never fully had Brady’s confidence. Patterson may have a future with this team, but it will never be as anything more than as a gadget guy in constraint-type plays. Dorsett will always be a complimentary player. And I’m hoping that this is finally the offseason where everybody shuts up about the need for a deep threat who’ll stretch fields and take tops off of things and just realize at long last that sure-handed, clutch, elusive route-runners who understand this read-heavy system win championships. And I just perfectly described Amendola.

Will it happen? Who knows? Do I and every Patriots fan with a brain in their head dream about it happening so we can get Amendola and Edelman back on the field together for the first time since Super Bowl LI against Atlanta? Absolutely. Make this happen. 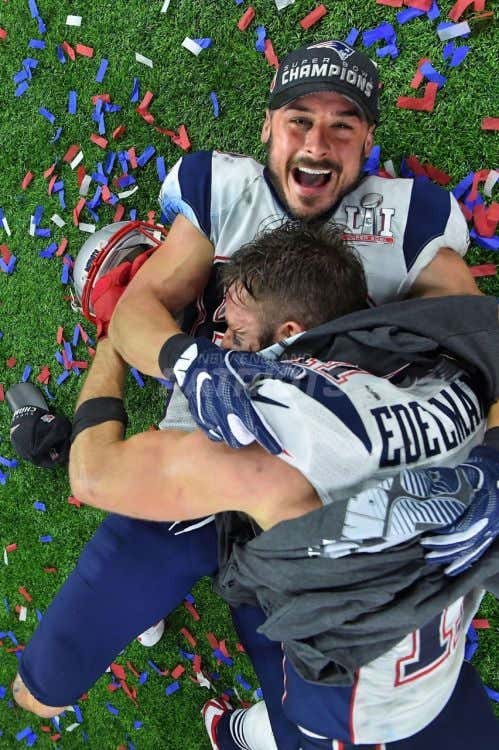