A man was stabbed in his eye Wednesday afternoon as he rode on a CTA bus in the West Side Austin neighborhood.

About 4:15 p.m., the 47-year-old was riding on the bus in the 300 block of North Cicero when someone fell asleep on him, according to Chicago police. After the man pushed the person off of him, the suspect stood up, pulled out a knife and stabbed him in the right eye.

The man was taken to Mount Sinai Hospital, where his condition was stabilized, police said.

Well what in the fuck did this guy expect?  Riding any sort of public transportation sucks, but riding it in GARFIELD PARK of all neighborhoods is basically a death sentence, so in reality this guy guy out relatively unscathed.  Lesson learned.

Which brings me to my next point.  I want YOU to send me all your fucked up videos and pictures from taking public trans to/from downtown.  See a guy get stabbed in the eye?  Send it.  See a homeless dude take a dump on the third rail of the green line?  Send it.  See a dude warming up some leftover Pequods under the heat lamp?

Send that shit.  This is a call to action blog.  For instance, back when I was about 15 I took the train with a buddy into town to go to a Sox game.  We ended up on the wrong train back to the suburbs and in a less than stellar neighborhood.  We got off the train at the wrong stop (I wanna say it was the Red Line south to 95th) and we got off and witnessed two fire fighters beating the shit out of each other for some reason.  Had it been a time when camera phones were a thing, I would have risked my life by whipping it out, filming the fight, and sent it to Barstool Chicago.  I bet Neil would have written a hilarious blog about that video.

And for those of you who don’t understand how fucked up public trans in Chicago can get, just go to YouTube and type in “Chicago CTA fights” 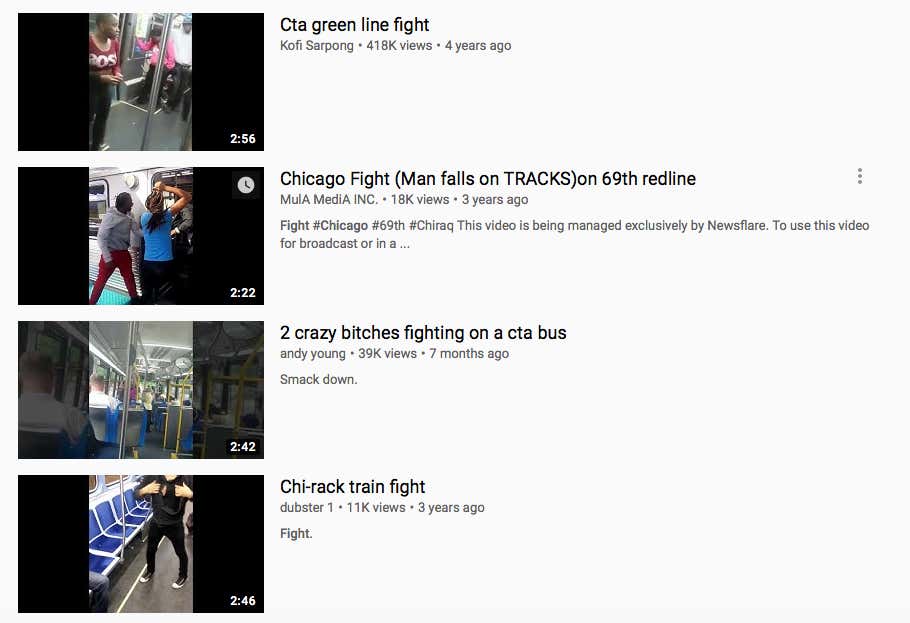 It’s really fucked up stuff.  So again… send that shit.  Help us help you