OK this was all fun and games when the bats kept showing up in San Antonio. We all enjoyed watching their mascot come out and catch that rogue bat and make our Manu Ginobli jokes. That’s sort of the Spurs thing dating back decades. We laugh it off as a funny moment during a basketball game, but maybe we’re being naive about this whole situation. Now that we had another run in with bats at the Pacers game last night, are we missing something that’s right in front of our face?

Are the bats toying with us by showing up at NBA games as some sort of distraction so we’re not paying attention and worrying about a potential bat takeover?

OK that’s ridiculous, and while you can’t officially rule it out the one thing we can agree on is the NBA has a big time bat problem. The whole thing seems a little suspicious to me and after doing the research I think I may be onto something here. Stay with me for a second 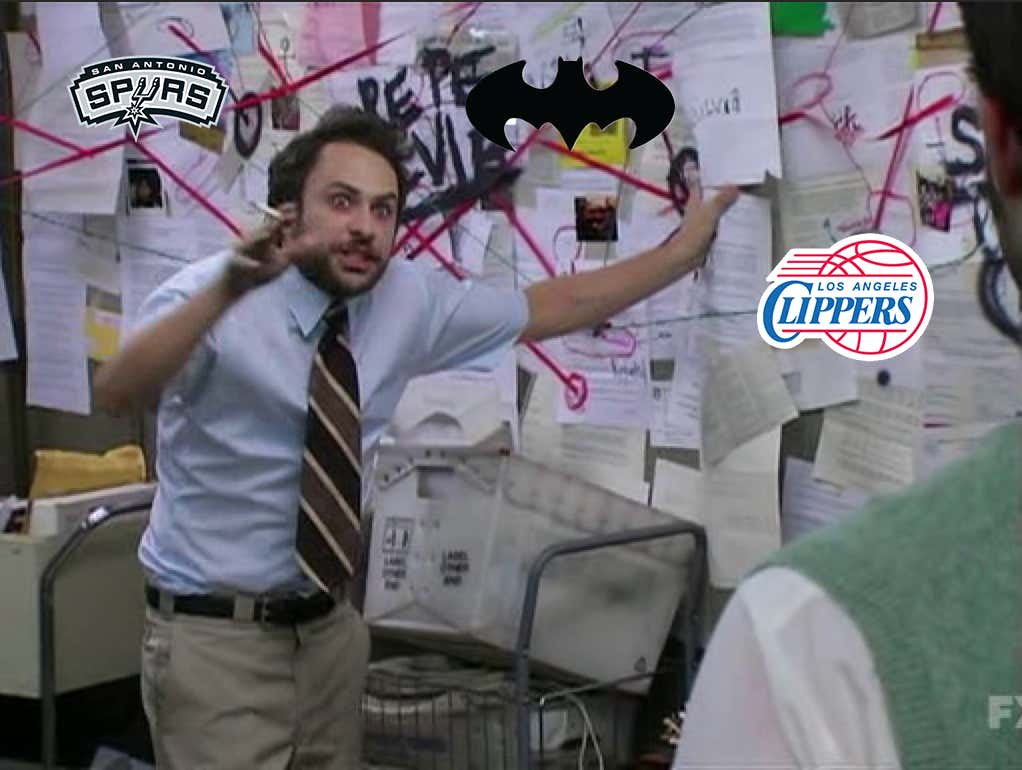 Let’s just look at the facts. Which NBA team has extensive experience dealing with in arena bats? The Spurs. Who were the Pacers playing last night? The Clippers. Not sure why that’s important? Well…..

Weird, just two teams battling for position out West. The Spurs currently struggling and at risk of being passed by the Clippers which could mean a postseason date with the Warriors. Nobody wants that. Then think of when the bats were first introduced in this game, the score was 17-16 Clippers. They looked like maybe they were capable of pulling off the road win. Sure it’s early but as we know the best way to kill any sort of momentum is to unleash a bat in the arena so everything has to stop until it’s contained. The more I look over the facts, the more I question whether or not the Spurs are using these bats to their advantage. Think about it, the first time the Spurs released the bats was against the Nets….they won. The next time we saw it was a game against the Pelicans…..another win. I’m telling you, this is starting to add up pretty quick.

I know what you’re thinking “But Greenie, the Spurs were playing last night, how could they have pulled this off?”

I would say the fact that they were playing makes me think something was definitely up. Nobody would even think it would be possible that a Spurs spy made the trip to Indiana to release some bats if they were in Portland losing to the Blazers. Classic diversion. Now they didn’t fully execute their plan by losing by 9, but they were effective in doing their part to ensure the Clippers would lose momentum and ultimately not gain any ground on them. From that stoppage on the Clips lost the quarter 20-14, and from there the Pacers pulled away. Really makes you think.

All I’m saying is if Adam Silver isn’t going to do a damn thing about LeBron blatantly cheating, maybe he should direct his resources to look into how the Spurs may be using bats as a competitive advantage. So far we’ve seen three instances of bats making their presence known in games that directly benefit the Spurs. There’s one franchise who has the knowledge and experience to use them to their advantage and they reside in San Antonio. You can’t debate that. I may just be a blogger, but I feel like I just exposed one what would be one of the all time great NBA conspiracies.

Go ahead, prove me wrong.