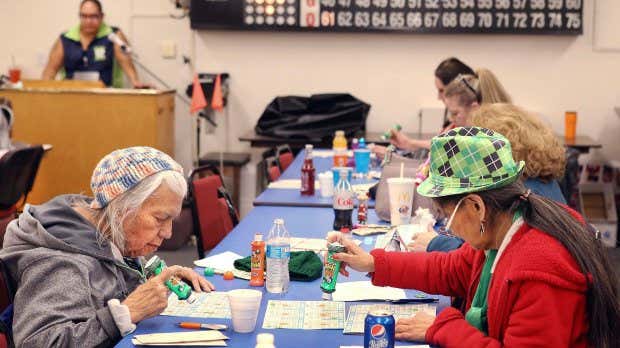 CBC – When a bingo-related dispute heated up at a long-term care facility in Rideau Lakes, Ont., on Tuesday, OPP officers had to be called in.

It began when a 79-year-old woman took a seat normally used by an 86-year-old woman, according to Leeds County OPP spokesperson Const. Sandra Barr. The ensuing argument between the two women then escalated into a physical altercation. Other residents got involved, turning the situation into somewhat of a brawl, and OPP were called.

Well I guess it’s time to finally ask the question we’ve all been wondering… Do Nursing Home Bingo Games Need Enforcers? Because I believe the answer is undoubtedly “yes”.

Think about it for a moment here. This 79-year-old rook comes into the building. She’s been old as shit for at least a couple of decades so she’s probably used to getting her way wherever she goes. Anytime this 79-year-old hot shot shows up to a bingo hall, she’s probably one of the oldest in the building. And considering everyone is taught to respect their elders, she’s always getting whatever she wants. If she wants a seat, that seat belongs to her.

But all of a sudden she shows up to this old folks home and she’s not the oldest in the league anymore. In fact, she’s actually one of the young guns here. So her showing up and trying to take the seat of an 86-year-old vet? It’s like a 1st round draft pick coming in to the NHL at 18-years-old and treating the pros like they’re back playing junior hockey in the OHL. It would be like an 18-year-old rookie spitting in the face of Sidney Crosby. That shit just doesn’t fly.

Like I said, this 79-year-old was probably the big fish in the pond at her old nursing home. But she’s in the big leagues now. She’s going up against 86-year-olds and she just hasn’t earned the right to take their seats yet. So when she does? Obviously some hands are going to be thrown and some knucks are going to be chucked. Good on everybody else for stepping in there too. Always love to see squad protect their own out there.