Gordon Bombay was a great coach. You may not have to always agree with his methods but there’s no denying the fact that the man cultivated champions. Whether it was in the Minnesota PeeWee State Tournament or the Junior Goodwill Games, Gordon Bombay always got the best out of his players. Hell, even when he wasn’t even their coach anymore, Bombay played a pivotal role in getting Charlie Conway and Dean Portman back on the team at Eden Hall which was crucial to the JV team’s victory over the varsity squad. So whether or not you liked Bombay as a human has nothing to do with the fact that as a coach, he was a certified winner.

Now speaking of Bombay’s personality, I won’t lie–the man was kind of a sleaze bag. He got arrested for drunk driving, he was banging his players’ moms and then leaving them dry to go play some minor league hockey, he was plowing his opponent’s trainers, etc. etc. He was a great hockey coach, just not a great guy. Which is exactly why he would love the shit out of Russ Tyler selling a hockey puck for 8 payments of $19.94. This seems like the exact type of move that Bombay would have pulled if he was still some greasy lawyer working for that even bigger sleaze bag in Mr. Ducksworth. $100+ for a hockey puck with some tape slapped on there? It doesn’t get any greasier than that.

By the way–I’ve already mentioned this in a previous blog but I love the fact that Tommy Duncan got to weasel his way back in with the Ducks. 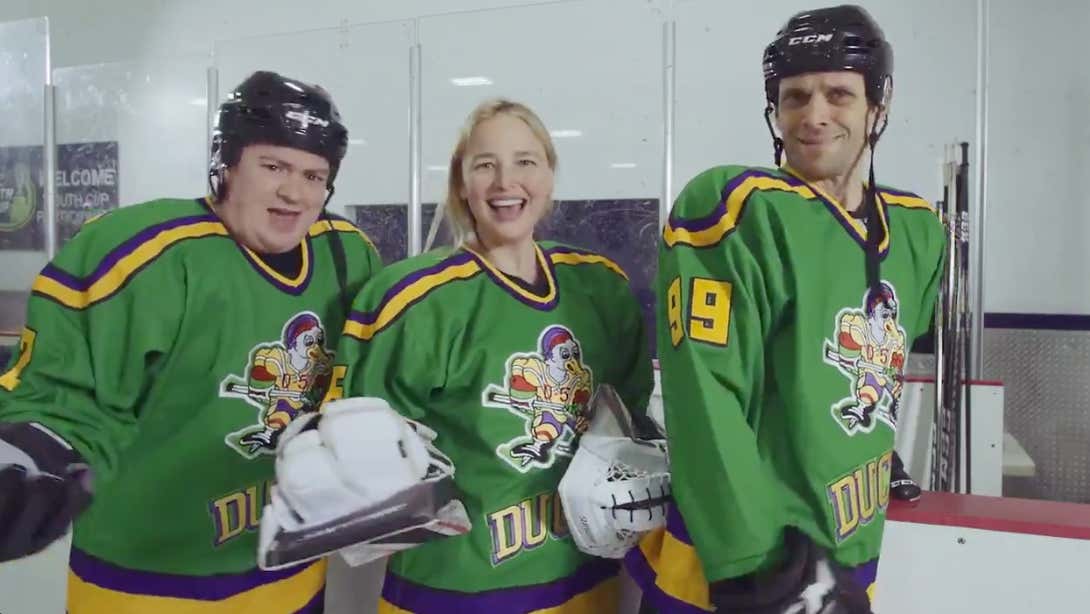 I have to imagine the majority of the world completely forgot that Danny Tamberelli was in The Mighty Ducks. But here we are in 2019 and he’s right back in the mix. Have to imagine that Goldberg falling on some hard times probably prompted the call up for Tamberelli but that’s neither here nor there. It’s just great to see Tommy Duncan getting the shine he deserves again.

And by the way…Julie The Cat? Still got it.