Our long national nightmare is finally over as the Knicks keep giving us good news by winning the trade deadline! Enes Kanter can stop terrorizing the Knicks on social media, the bench, and after every game with the media. Or I guess he can still do that, but not as a member of the team. The weirdest thing about this Kanter situation is he went from fan favorite to fan meh to fan least favorite in less than a year’s time. I remember how many Knicks fans (myself included) that LOVED him after he got in LeBron’s face when he tried to push around Frank Ntilikina.

The corny tweets could be annoying, but when you love a player you can overlook them. However once Kanter (wisely) opted into his $18 million option and then proceeded to bitch about being on a team he willingly joined knowing they were likely going to tank, the fans started to turn on him, especially once it seemed like he was moping on the bench and griping to the media. Then once he started popping off corny emoji tweets during the KP trade, it was officially over. 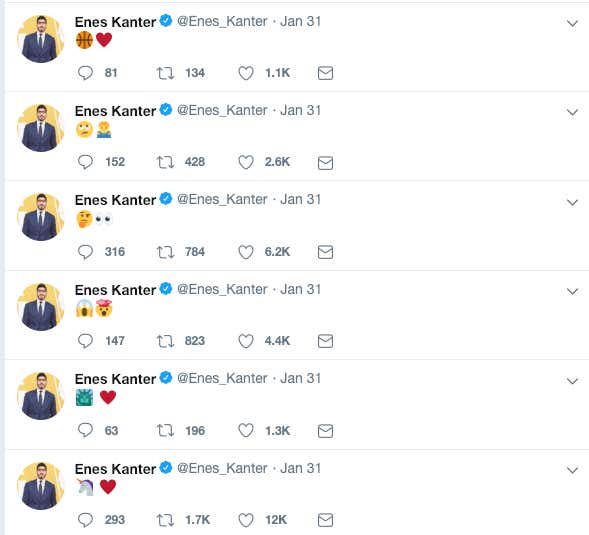 So goodbye, Enes. We liked you then didn’t really care about you then couldn’t wait until you were gone while also feeling bad that you were in the middle of an international incident with your home country that could potentially kill you. I’m sure you will give a playoff team some minutes, points, rebounds, and more rebounds after continuing the time honored tradition of acting like a dick while cashing a James Dolan paycheck. I would say you are excluded from #OnceAKnickAlwaysAKnick, but I’m pretty sure there is nothing you can do to break that sacred bond. So instead we will play you out with this absolutely incredible video that blessed my timeline.

Oh yeah and while I usually hate when the goons at Madison Square Garden treat fans like its Communist Russia, I hope that they ban any fan that chanted Kanter’s name over the last few weeks for life.

As for the rest of the trade deadline, I was hoping we’d get something for Wes Matthews or Noah Vonleh, but nothing panned out so they bought out Matthews while Vonleh becomes a free agent this summer. We can bang our heads against the wall about not getting even a 2nd round pick for two guys (three if you include Kanter) that could help a playoff contender. But I think Scott Perry has earned the right to get the benefit of the doubt that if there was a good deal, he would have done it.

P.S. I can’t believe this was only a week ago. It feels like a month ago at the very least considering all the KD, AD, KI stuff that has happened since.

(I think using KI for Kyrie stinks, but writing out all those names is annoying as fuck, so I will embrace lazy initials nicknames for everyone linked to the Knicks for now)