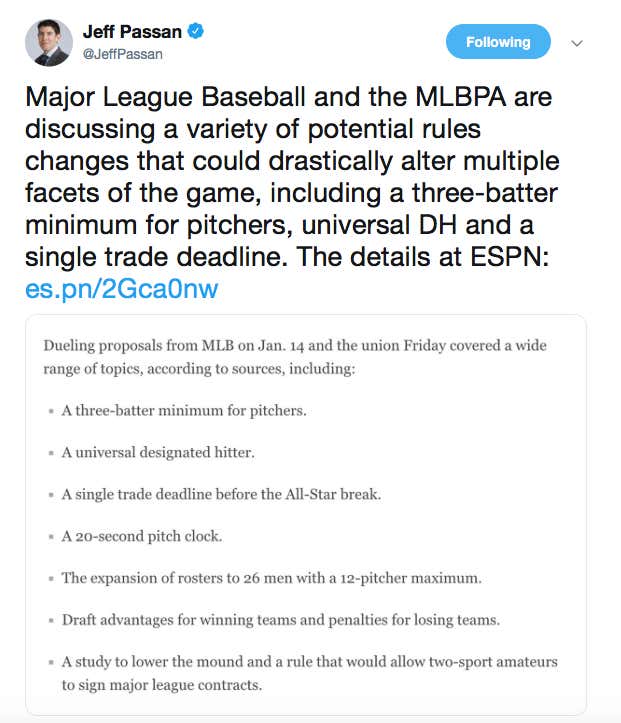 It’s safe to say, that no matter which team you root for, be it a big dog like the Yankees or Bosox or a small market team like the KC Royals, MLB is in some trouble in the next few years.  Many people smarter than all of us are forecasting a potential strike, and it’s easy to see why.

We’ve gone over it ad nauseum all winter; Bryce Harper and Manny Machado only having a small handful of potential suitors this winter is nothing short of an embarrassment for the league.  But why is that?

New TV deals have lined owners pockets more than ever but players wages are going down.  Again, if you would have told me that Bryce Harper or Manny Machado would have signed a deal for less than $300MM this winter, I would have said you were batshit crazy 4-5 months ago.  But it looks like they might not sniff close to that.  It’s an economic market correction due to prior long term deals rarely working out, but that isn’t going to slide for the MLBPA.  The players know how much money baseball is making as a whole and they want their salaries to reflect that, but instead their salaries are going backwards.  It’s not a pretty situation.

But now there are rumblings that MLB and the MLBPA lead by Tony Clark are already starting to talk about the new CBA which expires in 2021.  This is a very good thing.  Get a two year head start on what could very well be the ugliest period in baseball since the 1994 mid-season work stoppage.

But now we have other rule changes floating around.  Let’s take a look:

This one sucks IMO.  I get that there are people who hate how slow the game moves these days and ‘pace of play’ is an issue but don’t take strategy away from the game.  A loogy is a loogy and is paid and rostered as such.  If this happened Ricky Renteria would be out of a job and swiftly.

I think this is one most people would agree on at this point.  What the fuck is the point of Jacob deGrom hitting?  Or how about Joe Madden taking out Jose Quintana every game in the 5th inning because he gets no run support and they need someone who can swing the bat for him?

Give each league the DH and end it.  And don’t tell me you love the strategy of the NL game; more people love watching DH’s dropping bombs 40 times a year.  Do you want to see JD Martinez or Kyle Schwarber in the field butchering baseballs?  Fuck no.  Tell them to hang up their glove and forget about it.

This would be all hell breaking loose… but it could also be really fun.  Currently the trade deadline is on July 31st every year.  Moving it to before the All Star break would effectively make teams choose to buy or sell two weeks early and then there wouldn’t be any teams dumping a players like Daniel Murphy’s contract for free just to clear money off the books.  It’d be mayhem and I would absolutely be here for it.

But on the flip side, we regularly see teams that get hot as fuck in August and September that backdoor a playoff spot.  This would end that as well.  So why not just keep the same deadline on 7/31 and eliminate the waivers deadline?  I think that will eventually be the middle ground they meet on, and I’d be for it.

FUCK AND YES.  Mark Buerhle pitched games were the best pitched games.  Folklore has it that he only shook off AJ twice in his entire career and in his career averaged 16.1 seconds between pitches.  Absurd.  Just got the ball and pitched it.  You’d see Buerhle pitch in games that didn’t crack 2 hours quite frequently, all things considered.  I’d even go as far to make it like… 17-18 seconds between pitches.  As much as I love Jose Quintana, he takes fooooorrrrreeeeevvvveeeerrrr to throw the ball and it’s so goddamn boring watching him.

Another rule I’d be allllll for.  And this rule with get a few guys absolutely fucking paid.  Guys like Billy Hamilton or Adam Engel who haven’t proven they can hit at the big league level, but can go in and swipe a bag anytime they’re on base.  Jarrod Dyson was an exceedingly important piece during the two Royals’ World Series runs.  This should be a no-brainer in new CBA negotiations.

Draft Advantages for Winning Teams and Penalties For Losing Teams:

This is where it gets really, really hairy.  Tanking is an obvious issue right now.  Not that I disagree with teams who are doing it, as they’re just playing by the rules, but when looking at it from 30,000 feet it’s not good for the game, not at all.  Which brings us back to Manny Machado and Bryce Harper: the fact that at least 1/2 the league isn’t lining up to sign one of these guys is brutal for the game.  The White Sox timed their rebuild perfectly and are in them, which I’m obviously glad for, but most other years they wouldn’t be.  It’s a crime against humanity.

Right now the lux tax line is about $206MM.  If they implemented a salary floor to allow for a draft lottery of say… $125MM, the poor teams would spend just enough to hit that mark.  That’s pointless.

This isn’t something that would need to be worried about too often as it’s rare a player is on the Kyler Murray level of ability, but should the situation arise, I’d doubt that many teams would spend major league money on a player that they aren’t sure will be a major leaguer anyways.

All in all, we’re about to see some sweeping changes in our game.  As far as the free agency issue we’re dealing with, I’d propose this:

Once a player’s MLB clock starts, he’d have 1 year at ~$550K followed by 3 arbitration years, which guarantees a team 4 years of team control.  Lengthen the MLB season to 180 days opposed to about ~155 days so players aren’t held down to start the season for service clock reasons like Bryant was or Eloy will be.

Instead of 6 or 7 years of team control, the team will have 4 or 5, but will also get paid with respect to their production of the previous season.  This will also allow players to become free agents much earlier than they do now and entice teams to hand out larger contracts when they are.

Hopefully they sort this out sooner than later, because a strike would be the death of baseball until another steroid era pops up.  Watch it happen.