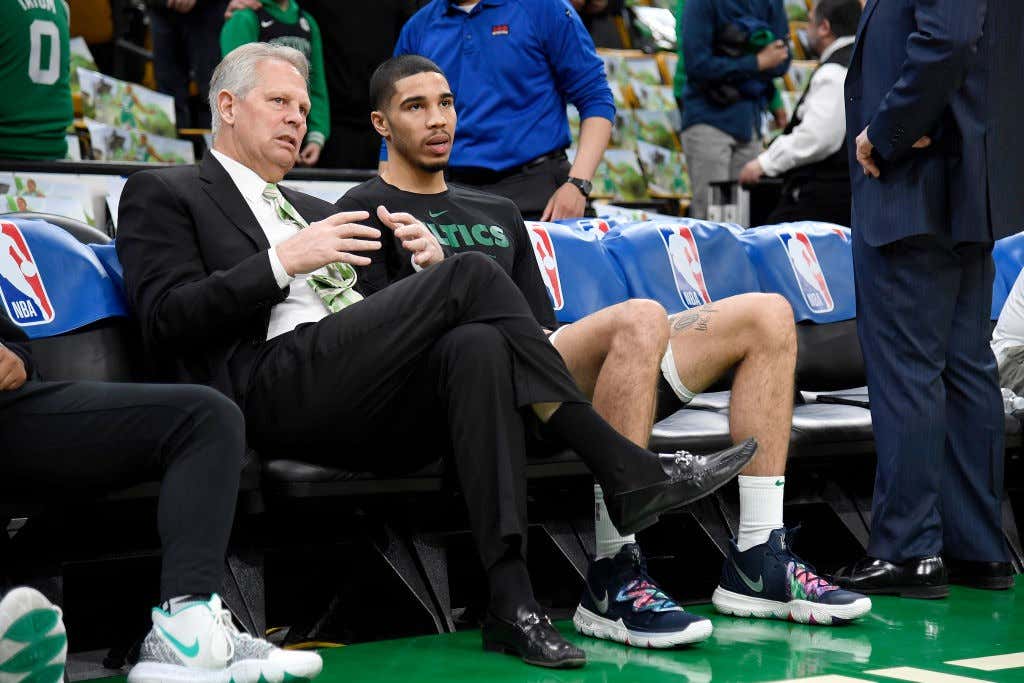 Every day it seems like there is more and more posturing from all angles leading up to Thursday’s trade deadline. It’s no secret that teams have their go to sources to leak information in an effort to manipulate the market, and we’ve certainly seen our fair share of that this week. Hell it seems like as soon as I finish one blog about a Woj/Shams bomb they’ve already dropped three more. As a Celtics fan it’s exhausting, it can be disheartening, it can be frustrating, but really all we have to do is just wait for our side to do some leaking of their own. We know Rich Paul is doing everything in his power to get what he wants, and it’s only right that Ainge go to his outlets and spin his side of the story to counter. Over the last handful of hours, that’s what we’ve seen. It starts with Woj

As I’ve talked about before, it’s pretty clear that Shams is connected to Klutch and Woj is Ainge’s guy. After waiting a full day after hearing what the Lakers offer was for Davis, and after hearing all this Rich Paul bullshit about Kyrie not staying and how Boston wasn’t on a list in an effort to scare teams away, Ainge dropped that bomb that he doesn’t really give a shit about what Kyrie does, he’s unloading the clip regardless. For NO, that’s all they care about. It then came out that the Pelicans want a ridiculous amount of picks, the number listed here was interesting as it appears they want 4 first and second round picks. Why is that significant? I dunno, maybe because Ainge just so happens to own 4 first round picks this summer. This is what Ainge had to remind everyone, he’s still the one with the largest collection of high end assets, so it makes sense that we’re still seeing NO wait.

Getting the leak from Woj is one thing, but you see Ainge is going one step further. That’s where SI’s Chris Mannix comes in. Now he’s a national NBA guy, but he used to be a Celtics ball boy, works for NBC Boston during Celtics games, and is clearly connected to that franchise. He had a couple of interesting nuggets today that were some classic Ainge spin.

As the Pelicans field offers for Anthony Davis, Boston’s message to New Orleans has been direct: Wait. Wait, and we will come to you with an offer that will make it worth it. Wait, and you can raid our stash of draft picks. The Celtics have refused to directly dangle Jayson Tatum, two sources familiar with the situation told SI.com, but the Pelicans have been left with the impression that if Davis remains on the roster past Thursday, nothing is off the table.

The narrative on the internet has been the only way Ainge is going to get NO to hold off is if they make Tatum part of the deal. Well here we have Ainge playing both sides in an effort in my opinion to squeeze the balls of the Lakers. Is Tatum available? Is he not? All he’s saying is he’ll make it worth it to the the Pelicans but by not directly promising anything he still has an out to switch things up once we get to the summer. Maybe by waiting LA changes their offer and Ainge can swindle with lesser players and all his picks. I would just say as a Celtics fan it’s a great feeling to know that at no point has Ainge 100% committed Tatum to being part of this deal, but he left the option open just to screw with Magic. That’s how you fucking do it.

But there’s more. Part of why this week has been so tense is because of all the drama surrounding Kyrie and what he plans to do this summer. Nobody really knows, but people have latched on to Rich Paul’s leaks and declared them as facts. That same Mannix story had a different idea, even if it is just anybody’s guess

The root of his frustration, a former teammate of Irving’s told SI.com, could have little to do with Boston at all. Irving hates the narrative that other players (Kevin Durant in New York; Davis in Boston) can influence his decision, the ex-teammate said. He gets frustrated when he feels people are trying to manipulate him. In his mind, it doesn’t matter if it’s Davis or James—he’s going to do whatever he wants to do, and to assume otherwise is disrespectful.

Think about everything we know when it comes to Kyrie. He wants to be the top dog, he wants the responsibility of being the go to franchise type guy. Think back to what he said that day in New York

Hearing that come from a former teammate, someone who for sure knows Kyrie better than Twitter does, makes his situation seem a whole lot different. Was there a point in time where Kyrie was frustrated with this team? Yeah when they fucking sucked in November. But since Thanksgiving the Celtics have been one of the best teams in the league, the young guys are accepting and flourishing in their roles, and he’s playing the best basketball of his career. The same drama that was surrounding this team earlier in the year no longer exists. So maybe this other idea of where his frustration is coming from may have some merit. Remember the earlier narrative was Kyrie was frustrated with the Celts and that’s why he would want to leave. Well I don’t think anyone even mentioned this other possibility until today, which you simply can’t ignore. We all still have no idea what’ll end up happening, but it’s nice to hear credible reporters come out and refute things that Rich Paul keeps trying to leak in order to get LeBron what he wants.

With two more days to go, you know this isn’t over. There will be a rebuttal from the other side as things get down to the wire you can bet your life on it, and I’m just happy that Ainge is willing to play along and punch right back. Things are already stressful enough, so sometimes hearing things that fit YOUR agenda can be just what you need to make it through this crazy time.

Now if you’ll excuse me, I need to get back to refreshing Twitter.