This is what happens when you hold a championship Duckboat parade about as often as the seasons change. People act like they’ve been there before. Because they have. In place like Philly and Cleveland, where a title in any of the major sports is the kind of thing that skips a generation, they eat horseshit off the street and flip cars. In my town, it’s a chance to do civic duty. People turn into Good Samaritans. Do you have any idea what a sloppy mudhole the Common is on a day in the mid-50s when we’ve had so much rain? It must be like the fucking Battle of Passchendaele down there this afternoon. Those poor Pats fans are going to have to spend the next few hours caked in mud while they day drink at the places around Tremont. But that’s the prevailing mood around here.

It’s a reminder of all the bad publicity we got back in 2004 when the Red Sox won. And college kids got out of control around Kenmore Square and the news was filled with young assholes climbing utility poles and yelling “I’ve been waiting for this my WHOLE LIFE!!!” While everyone I know watching the coverage said, “Dude. You’re 20 years old and you’re from Indiana. The fuck out of here with that.” Or as a buddy of mine from Dorchester put it so brilliantly, “You know none of those rioters was from around here. Because no real Masshole would ever walk away from a beer to go outside the bar and wreck his own city.”

Nope. We didn’t then and we don’t now. As of the last news coverage I saw just now, police and City Hall are saying they’ve had no incidents. Other than these fine upstanding people freeing an emergency vehicle so these First Responders can do their jobs. People helping people so they can help people.

That’s just the kind of people we are. I know it’s hard, but try to be more like us, rest of America. 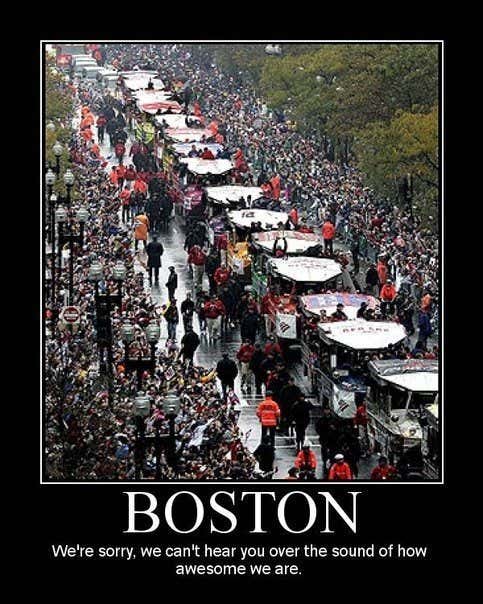