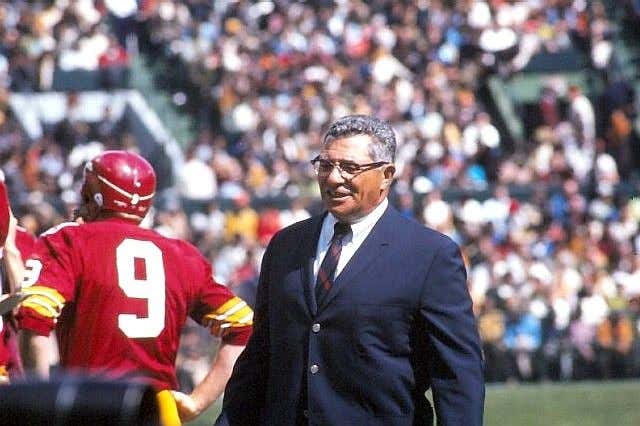 A year after retiring as coach of the Green Bay Packers, Vince Lombardi agrees to become the coach and General Manager of the Washington Redskins. Lombardi had agreed to join the Redskins after being offered full authority of personnel decisions and a 5% ownership stake in the team. Much as he did a decade earlier in Green Bay, he led Washington to their first winning season in 14 years at 7-5-2.

Born in Brooklyn on July 11, 1913, Vince Lombardi was the son of Italian Immigrants. The first of his family to attend college, Lombardi was a member of the Seven Blocks of Granite at the University of Fordham, largely considered one the best offensive line units in the history of college football. At first, he tried to enter law school, but expenses and family obligations forced Vince Lombardi to take another path. This path led him back to school, where he became a teacher and a coach at Brooklyn Prep, where he coached a young Joe Paterno.

After coaching stints in New Jersey, Fordham and West Point, Vince Lombardi got his first NFL job as an assistant coach with the New York Giants, in 1954. He would serve as the Giants offensive coordinator until 1958 when he was offered the head-coaching job of the Green Bay Packers.

When Vince Lombardi got to Green Bay, the Packers were a team in ruin, having not posted a winning season in a dozen years, they were hopeful a new stadium that opened in 1957 would reverse their fortunes, but after a 1-10-1 record in 1958 the Packers looked like a dinosaur from a bygone era. The turnaround for the Packers was immediate under Lombardi as they won their first three games in 1959. The Packers would endure a midseason slump but finished strong winning their last four games to post a 7-5 record. In 1960, the Packers won the Western Conference but lost the NFL Championship Game to Philadelphia Eagles. It was the only playoff loss the Packers would endure under Vince Lombardi. Green Bay would win the next two NFL Championships and five of the next seven. This also included wins in the first two Super Bowls.

Following their victory in Super Bowl II, Lombardi decided to retire and focus on his job as General Manager in Green Bay as he had begun to feel tired and drained at the end of the 1968 season. Vince Lombardi missed the competitive fire of coaching and accepted the offer to become coach of the Redskins. The Redskins were an even bigger mess than the Packers were when he took over in 1959. The Redskins had not had a winning season in 14 years, posting a 5-9 record in 1968. As he did in Green Bay, Lombardi inspired the Redskins to get off to a strong start, winning four of the first six games. While the Redskins struggled down the stretch, their 7-5-2 record marked their first winning season since 1955.

Sadly, there would not be a second season in Washington for Vince Lombardi as his worsening stomach pains turned out to be cancer. The cancer would be determined to be terminal, as he died September 3, 1970, just before the start of the regular season. In ten years as a coach, Vince Lombardi never had a losing season, posting a record of 96-34-6, which did not include a 9-1 record in the playoffs.