So we’ve already talked about my favorite pizza spots in Chicagoland, which was the perfect and only credible list of best pizza places in Chicago that’s ever been made, and last night I received this email:

Thanks for the email, Jeff.  I’ve never actually been inside High Dive, but I’ve walked past it 10000x in my life, so now I’m going to have to check it out.  Ya know why?  Because I love me a good chicken wing.  And none of that boneless shit either – bone in or GET THE FUCK OUT.

It also gots me thinkin, I need to do a top wing joint list in the city.  So that’s what we’re gonna do here.

I make it a point to check out the best pizza places in Chicago as much as possible.  I haven’t tried them all, but I’ll drive to the far south side, northwest side, suburbs, or anything else to enjoy pizza.  Wings?  Not quite.  I love a good chicken wing, but it’s not like “ohhhh let’s drive down to Frankfort to hit up that place that has the good wings!” so I may have missed a place or three on here.  If I did, let me know on twitter or in the comments if you’re a loyal Barstool Gold member.

I’m going to start from the top: 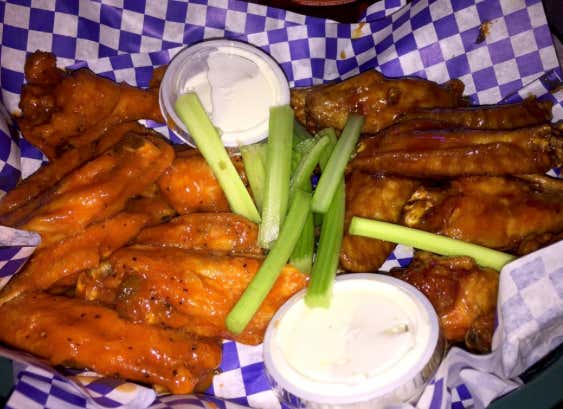 Everyone is always like “ohhhh you gotta try Bird’s Nest wings, they’re the best in the City, they have the wing special for Thirsty Thursday’s” blah blah blah.  Shut up.  They’re good wings, not great, and the place is a fucking ZOO on Thursdays for the $0.70 wings.  If we’re being honest they’re just normal buffalo wings and they’re not that great.  They’re not chickens that have been loaded up with steroids and they don’t have a wide array of awesome flavors like other places.  Go there and get cheap wings, drink your face off with DePaul kids but you get what you pay for.  Good, not “OMG THEY”RE THE BEST WINGS EVER” wings.  Kinda puny in size.  Just….eh.  Good, not great. Be forwarned.

Now we’re starting to cook with gas.  Jake Melnick’s is a Chicago staple.  Whenever the question “who has the best wings?” is brought up, Jake Melnick’s always has a seat at the table.  For me, Jake Melnick’s is the perfect joint to go get wings with someone on a Monday-Thursday night.  Sit down place, laid back yet good atmosphere, good pricing for the area, great bar and very good wings.  I still think they’re a bit overrated in the sense that people lose their absolute SHIT when discussing Jake Melnick’s wings but there is no denying that they are great.  Wide variety of flavors, solid enough girth, not outrageously expensive and Jake Melnick’s is just a perfect laid back place to kick up and get some wingage.  Best in Chicago though?  In my opinion, no.  Just a tier below the best, which follow below. 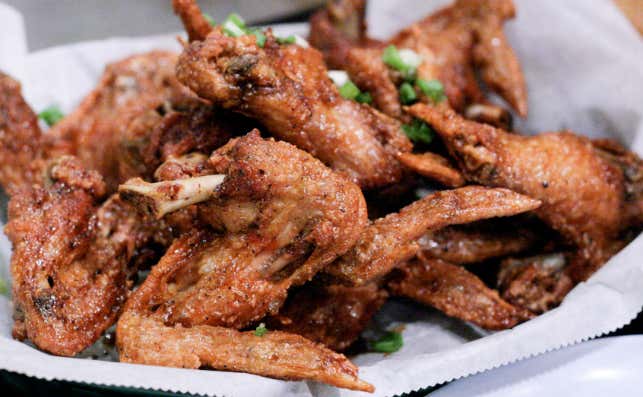 We’re done fucking around.  This is NOT a game.  If you haven’t noticed I take my food seriously, and we just got serious.  Crisp has arguably the very best wings in all of Chicagoland.  Some people may disagree, and in fact they’re not my personal favorite, but if you were to argue in their favor I wouldn’t disagree with you at all.  Just a preference thing.  The wings are fat, perfectly seasoned and fried and will satisfy even those most picky wing fanatic.

I have but two gripes with Crisp:

1. You have to eat the wings there and the place sucks.  It’s a take out Korean joint and it’s just not good.  I don’t even think they have TVs or anything, so the ambiance sucks.  The reason you have to eat it there is because fried food doesn’t travel well at all.  Wings should be eaten fresh out of the deep fryer, not after 20 mins of sitting in a styrofoam box.

2. Lack of flavors. I’m a traditionalist but there are only 3-4 flavors to choose from at Crisp.  They do have buffalo which is all I personally need, but if you’re looking for something exotic, you’ve come to the wrong place. 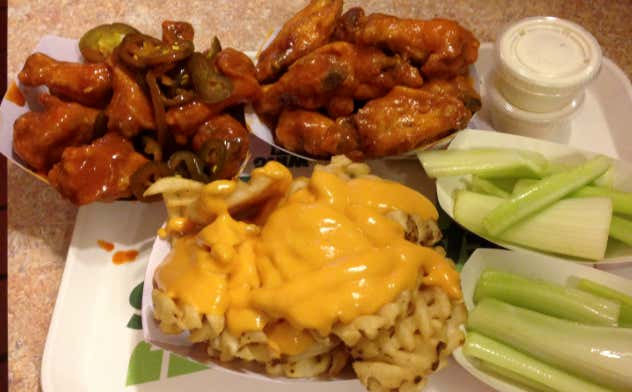 I have never eaten at the Buffalo Joe’s on Clark in Lakeview.  That said, I’ve heard it sucks.  The original Buff Joe’s or GTFO.  Now that we’ve gotten that out of the way, let me say this: Buffalo Joe’s FUCKS.  Again, if you’d tell me they’re the best in Chicagoland, I wouldn’t have any issue with that.  Not my personal favorite, but I can definitely see how they would be for others.

They wings are freaky girthy in size, but the flavor is just fantastic.  I’m assuming it’s some homemade BBQ buffalo sauce and it’s just a straight up lethal combination.  Absolutely love Buffalo Joe’s and anytime I’m up in the north shore I find an excuse to go there.  It’s an in/out place, not a bar or sit down place like Jake Melnick’s or Bird’s Nest, but make sure you eat there.  In and out in like 15 mins tops.

Also, if you’re going to bitch because it’s in Evanston, literally go fuck yourself. 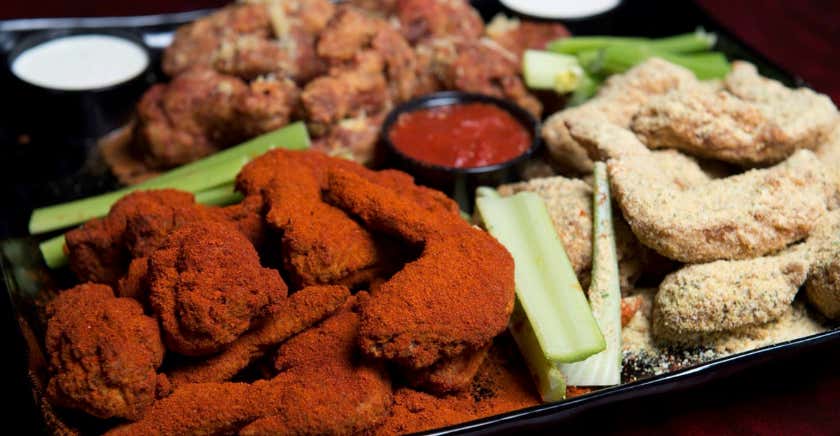 Crosstown Pub in Naperville is a staple for the western burbs.  And I know I just said western burbs – if you are pissed because I included them then kindly go fuck yourself.

Anyways – the fattest wings on earth.  Needle in ass steroided out chickens that have probably been in cock fights and won.  Biggest wings you’ll try and they have about 3 dozen different dry rubs and wet sauces to boot.  They also have the “Devil Sweat” Challenge where you have to eat 10 ghost pepper wings in 30 mins and sign a waiver and shit.  Yes, I will be doing it on video in the coming weeks.

They’ve won Wingest a couple of times over the years, joining Buffalo Joe’s and Jake Melnick’s as the other former champions on this list.  I’m ready to get crucified for this, but they’re the best wings in Chicagoland and I will take that to the goddamn grave. 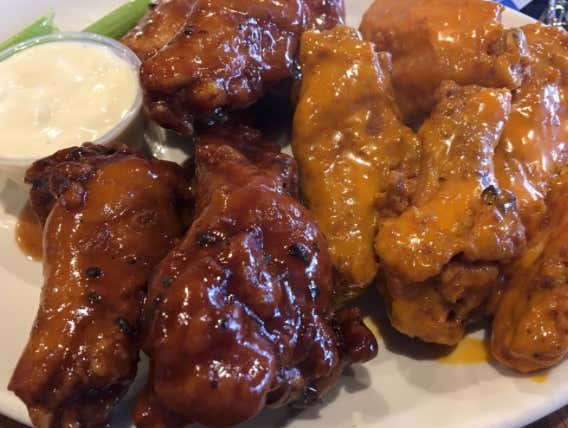 We’re back in Chicago folks.  I’m sure all of you “you’re not from Chicago” hardos had a fucking heart attack just reading the words “Evanston” and “Naperville”.   But let’s talk about chicken wings.  Let’s talk about Output Lounge in Ukrainian Village.

Output has my personal favorite wings in Chicago.  They have about 1000 flavors, are girthy AF, well priced, and it’s a perfect place to watch a game on a sunday.  Laid back atmosphere, good beer selection and the bartenders are sneaky hot.

Let me put it this way – if you blindfolded some random tourist and told them to eat a wing from Melnick’s, Bird’s Nest and Output and to pick the best one, I’d bet money that they’d choose Output over the other commercially more popular places.  Output has just bomb wings top to bottom.  If you’ve never tried them, make the trek over to Grand and Damen soon, you won’t regret it.  Tell them Dave sent ya.

And there you have it.  Again – if there are any places I’ve missed and HAVE TO TRY, let me know.  Shoot me an email or send me a DM on twitter.  VERY VERY EXCITED to eat some chicken wings with you guys.