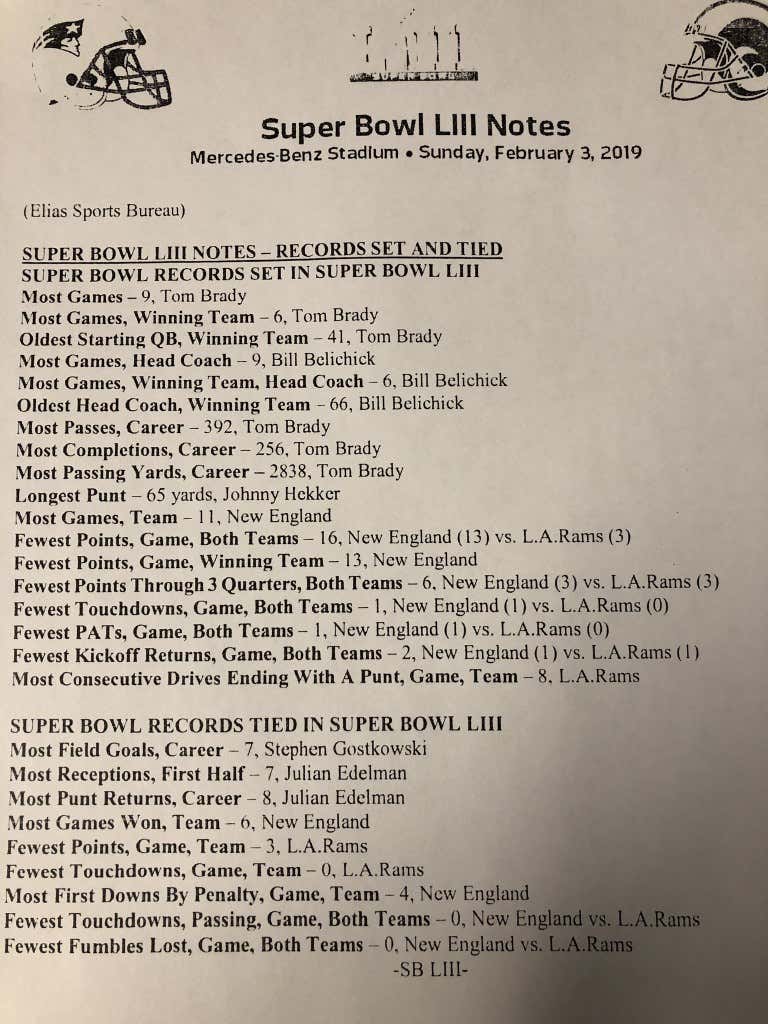 *Most Games – NINE (9), Tom Brady
We’ve all seen the graphic about how TB12 has played in more Super Bowls than most divisions have combined. That will never stop being silly.

*Oldest Starting QB, Winning Team – 41, Tom Brady
Also the oldest starting QB to lose a Super Bowl at 40 (I assume it’s 2:08 I’m not looking that shit up.) All the guy does is set records.

*Most Completions, Super Bowl Career – 256, Tom Brady
A shade over 28 completions a game. Again this game is the Super Bowl. Tom Brady completes 65% of his lifetime passes against strictly Super Bowl defenses.

*Most Passing Yards, Super Bowl Career – 2838, Tom Brady
It’s not 2839 yards. Not enough people are talking about this.

*Most Games, Franchise – 11, New England Patriots
6-5 in the Super Bowl. I’ll take that. Most teams can’t go 6-5 in the regular season against 11 mediocre ass teams.

*Fewest Combined Points – 16, New England (13) vs. Los Angeles (3)
I can’t believe they scored three points. THREE. Less than a point a quarter if my math serves correct. Just outrageous. That might haunt me as much as a coach as not handing the ball to Marshawn Lynch at the one. Like how do you play a whole football game and not score any points outside of one lonely ass field goal? Not even by accident? Really? THREE?

*Fewest Points, Winning Team – 13, New England
Score 33 one year, lose by eight. Score 13 the next year, win by 10. The Patriots are a +2 in their last eight quarters of Super Bowling.

*Fewest Combined Points Through 3 Quarters – SIX (6)
This shit was really 3-3 heading into the fourth. I really can’t understand why people from outside of New England even like this sport. Like you already hate the Patriots, they’re in this game every year, and then they go out and make you watch Big 10 Iowa-Wisconsin football.

*Fewest Combined PATs – ONE (1)
Lmao. Even 52 years ago when the forward pass would get you put on trial for being a witch they kicked more extra points.

*Fewest Kickoff Returns, Game, Both Teams – TWO (2)
I don’t care about this one.

*Most Consecutive Drives Forcing A Punt – EIGHT (8)
The AP worded it differently and it pissed me off so I changed it. They tried to say the Rams had eight straight drives end in a punt. It’s not like the Rams were dropping back on second down and punting. Maybe they should have cause nothing else was working but that’s beside the point. The Patriots forced those punts and deserve the credit for doing so. This defense stood on its head for all four quarters with only the most minor of lapses. To the point where I wonder if the offense was even allowed to practice this week or if Bill and Brian Flores just hammered the defense for the past two weeks. Gurley was a no show again. Goff was beyond shook. Cooks put up some decent box score numbers but had two touchdowns decimated out of his mitts. Robert Woods made a couple of catches I guess. CJ Anderson looked like the best back in the league against everyone else and then was a no show. Just an incredibly dominant performance by a unit that was called “slow” against Detroit way back in September. And that was deserved at the time. They got manhandled a few times this regular season. But against San Diego, the first half of the Chiefs game, and every minute of the Super Bowl, they were simply dominant.