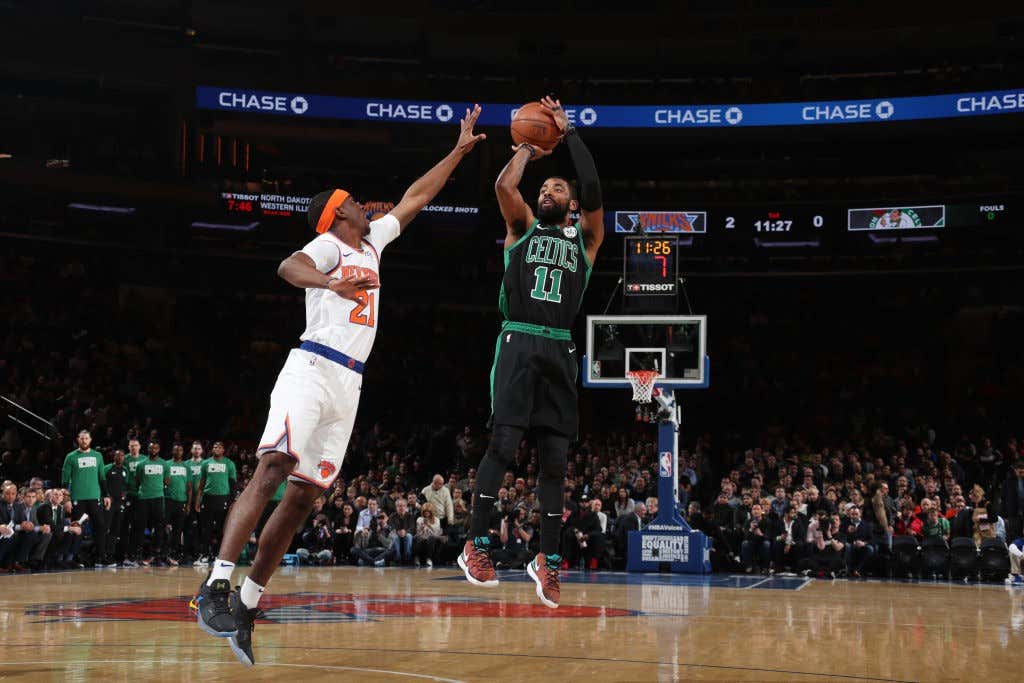 With all the drama surrounding this team yesterday, it was only fitting that they were playing at MSG. The only thing that could have made things worse after all the hot takes and quotes and rumors would be to go into MSG and lay an egg. This is a team that hasn’t won in forever but at the same time we’ve seen this Celtics team play down to their competition and walk way with a momentum killing loss. Thankfully, it seems like those days are behind us, or maybe the Knicks are so bad nobody can lose to them. Either way, I was just relieved this team was able to escape MSG not just with a win, but with Kyrie Irving still on the roster. I wouldn’t have put it past James Dolan and his goons if they tried to kidnap him and hold him hostage where they could brainwash him into going there this summer.

We’ve been waiting all season for this team to show us any sign of consistency, and it looks like we’re starting to see it. This was their 8th win in 9 games with the only loss coming close to GS, they’re blowing out the bad teams they’re supposed to which is something we didn’t always get, and they’ve been able to get back to their defensive roots with 6 of these 8 wins coming with an opponent point total under 105. Now look, nobody is throwing a parade because this team has beaten MEM/ATL/NYK and teams like that, but the reason for optimism is the Celtics faced a part of their schedule where they HAD to stack wins. They completed an 11-4 January, have started February off the same way and woke up this morning in 4th in the East just a game out of 3rd. We’re now at the point where maybe we can start setting our sights at the 2 seed which they trail TOR by just 3.5 games. That’s not such a crazy number compared to what it used to be and while they have a long way to go it’s not exactly a long shot as TOR looks like they may be falling back to the pack a little bit.

It’s hard to ignore the noise and the distractions when there’s a Shams/Woj bomb every 5 seconds, but the only way I can do that is by talking about what we saw last night. Let’s discuss.

– I was very interested to see how Kyrie would play in this game. Would he come out and get distracted and struggle? Would he put on a show with a ridiculous performance and play to the crowd? What we got in my mind was a quiet, methodical, standard Kyrie performance

A cool 23/10/6 on 45/40% splits in his 35 minutes, it was pretty clear he wasn’t letting all the bullshit impact his play on the court. That doesn’t make it not true or anything, but it is a little reassuring that despite what is said on Twitter we can rely on Kyrie to be the same old Kyrie that we need for this team to be successful. He led the team in usage rate at 29.4%, he did a great job of attacking and getting into the paint with 14 of his 20 FGA coming from 15ft or closer. On the defensive end it was obviously a gigantic mismatch, and what impressed me was Kyrie didn’t slack on that end. Overall opponents shot 3-10, the trio of Kadeem Allen/Damyean Dotson/Trier were essentially non factors when matched up against Kyrie on a total of 63 possessions. He also led the team with 7 deflections, so when you add it all up this was one of Kyrie’s most complete efforts of the season.

THAT is being a leader in my opinion. Block out the noise and show up in a big way to secure a much needed win. Thank you Kyrie.

– Yes, it came against the lowly Knicks, but I’ll take Gordon Hayward progress any way I can get it and you should too. As we know it’s been up and down recently over the last 5 games, but this was another 20+ minute solid 14/3/2/2 with 62/66% split performance.

Right off the bat the biggest difference we saw with Hayward was his level of aggressiveness. I’m not just talking about his alley oop which made me black out for a second, but also defensively. He only took 8 shots on the night and had the third lowest usage rate which are two areas I would like to see him have a larger role in, but there’s no denying he impacted this game in a positive way. In that third quarter where things were still relatively close Hayward had a couple huge threes, he had the highest net rating of any second unit player at a +19.6 and a TS% of 78.8%. Again, he was playing a G-League roster, but you have to start somewhere.

– Our long national nightmare looks like it’s coming to an end. It appears that Mook has found his shot again

He turned in his third straight 15+ point outing, was an efficient 7-14 (4-9) and filled his secondary scoring role perfectly. This may not seem like a big deal, but when you look at the stretch he’s trying to play himself out of

you get an idea of why last night was a nice sigh of relief. If the Knicks serve as Mook’s slump buster then who cares if they stink. We need him back to the Mook that was automatic and one of the best players on this team. He brought it on the other end as well with the second lowest Drtg among starters and held opponents to 4-10 shooting. Two way Mook is one of my favorite Mooks so I was pleased he made an appearance.

– Finally, this team took care of the basketball. Turnovers have been a thorn in this team’s side as of late but they finished last night with just 7. You combine that with just 10 Knick second chance points, and you have yourself a happy blogger.

– You know what else makes me happy? How Al Horford is playing

It’s pretty clear Horford is now healthy and rested, and his last 5 games have been very close to Playoff Al caliber. His 12.8/8.9/3.4/2.0 doesn’t exactly jump out at you, until you realize that he’s shooting 63.8% over that time. The rebounding, rim protection, and efficiency has been a huge part of why the Celts have been able to turn things around recently and really the only thing missing is his three point shooting. He’s not taking as many recently, his 2.1 3PA in January was his lowest average of any month and he took just 1 last night. I feel like teams still respect him from that difference so he’s still creating space for the wings to drive, but if he wants to change things up and get to spots where he can be more efficient who am I to complain?

– There were two parts of Jayson Tatum’s night that I loved the most. The first came from this set from Brad

Great use of the Horford screen to achieve the mismatch, he read his defender cheating and cut back out to the wing where he then had to be guarded by a man who in no way shape or form was going to be able to stay in front of him. These are more of the things I want to see Brad to do in order to get Tatum in positions to be successful. Too often I feel like he gets the ball on the wing and just tries to iso, and that doesn’t usually work. Working him off the ball and exposing mismatches is the easiest way to get the best out of him.

Tatum has really taken a step forward in his passing this year. He’s reading defenses much better, has especially improved his ability to pass off the dribble, and as a matter of fact he had the 4th highest AST% in this game, over players like Hayward and Marcus Smart.

– Shout out to the bench for holding up their end of the bargain. Not just Hayward, but Jaylen was solid with 11 points and another unstoppable turnaround in the paint

and while he wasn’t efficient, I thought Terry did a good job facilitating with his 6 assists and 0 TOs, and as a unit the bench turned in 42 points. I’ll take that.

– Piss poor energy to start this game and it really prevented them from taking advantage of a 36/42% 6 TO first quarter performance from the Knicks. They traded baskets for the most part until about halfway through, and I think we were all thinking the same thing. We’d seen that story against the Knicks before and given how this team started the game there was certainly reason to be a little nervous.

Same could be said about the third quarter too. What an ugly 12 minutes of basketball that was. Just 37/23% splits and 3 TOs, every starter not named Al combined to go 2-15. I don’t know what it is lately but it feels like this team comes out after halftime flat as hell on a consistent basis. That’s pretty much the exact opposite of every Celtics team we’ve seen over the last 5 seasons.

– Finishing with 25 assists isn’t bad, but it didn’t really feel like the ball was moving like we’ve grown accustomed to. I guess it’s just human nature to go against poor defenders and try to just take them one on one, but I feel like the Celts got away with one here. If they have this sort of ball movement against a team with a pulse, things will be rough.

– 1:15 for Yabu? Really? This is why I was annoyed the Celts blew their 20 point lead and got it back down to 10. It robbed us of Yabu minutes and that is never acceptable.

– The reality that as much as we want it to, the Kyrie stuff is not going away until July. Everything is going to be blown out of proportion, every loss or bad performance is going to be taken as a sign he’s unhappy and leaving, that’s just the world we live in. I’m tired of it, you’re tired of it, but it’s just time we accept the fact that there is no end in sight.

– What’s the excuse for allowing the Knicks bench players to drop 31 points on 13-24 shooting? You look at the defensive splits between units, the highest any Celts starter game in at was Smart’s 98.3. You then move to the bench and every single bench player had a rating over 100, including Jaylen’s 110 and Baynes at 106. We’re still waiting to see this bench play a complete effort as a unit on both ends, and thankfully this was a blowout and it didn’t matter.

So now we turn our attention to OKC. Enough of these dogshit teams, we have ourselves another big time measuring stick test. It’s been a mixed bag for the Celts when it comes to these type of games, and if they want to convince us they really have turned a corner, beat this red hot OKC team at home and get the entire city jazzed up for the Super Bowl. The Thunder are an impressive 16-11 on the road and have won 7 in a row and have jussssssst a little bit more talent than the team we just faced. Something tells me this team will be up for it and the Garden will be rocking, and frankly they need another statement win like this.

The 3 seed is in sight, the 2 seed is a possibility, don’t mess this up now.