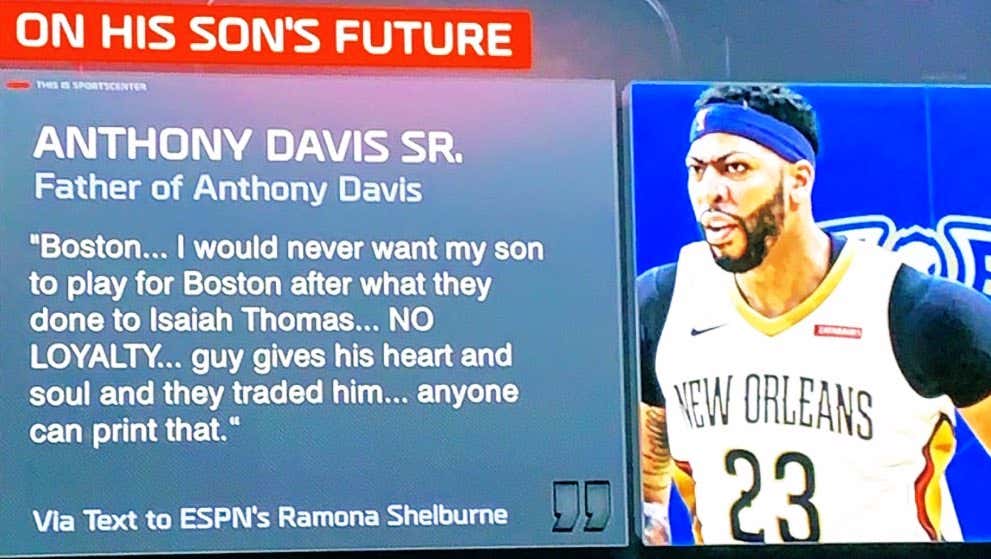 Dear God. This can’t be happening. Out of all the blows we’ve had to endure as Celtics fans over the last 10 hours or so, this one cuts the deepest on multiple levels. The whole reason we’re in this position of being a destination for AD is because Danny pulled a trade to get a player like Kyrie to pair with him. Now that very same move might not only cost them Anthony Davis, but if he doesn’t come then it also might cost them Kyrie Irving? I just passed out typing that. That’s some cruel karma type voodoo nonsense that only should exist in movies.

Being an Isaiah guy this hurt as well, but at least I came to grips with the fact that he was the sacrifice that had to be made to take a leap. I can’t even comprehend the reality of that very same move to be the move that severely hampers the franchise? That is pretty much a disaster scenario for Danny Ainge. Let me put it this way, we’d feel a whole lot better if Anthony Davis Sr. said he would love for his son to be a Celtic. Right? Well this is the exact opposite of that so I’m not sure how that’s supposed to make us feel. Here’s to hoping this is just LeBron and Rich Paul’s latest counter. You knew there was going to be something, maybe they got to AD’s Dad. I don’t know my brain is scrambling and the Celts are about to play in 15 minutes. This is turning out to be the most torturous trade deadlines in recent memory.

I need a fucking drink