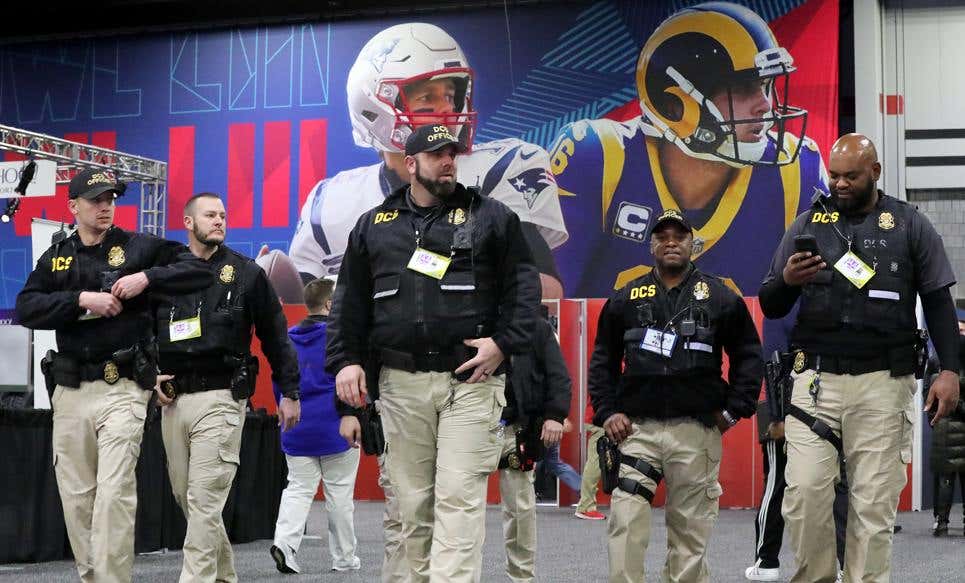 Urban Daddy – The first time Trevor Kraus snuck into a major sporting event, he hid in a giant trash bin for 45 minutes.

First round games in the 2010 NCAA Men’s Basketball Tournament took place in Buffalo, and Kraus drove up with a friend to see Mizzou play. They won (yay), but while employees attempted to clear the crowd for the next game’s ticket holders, Kraus opted to climb into a big (empty) garbage container instead, where he remained until the arena filled up, again.

Since then, Kraus has snuck into 23 major sporting events, including Super Bowl XLVI, The Masters, a Wimbledon final and three games during the 2011 World Series (he says he’s only failed twice). The “spin move,” as he calls it, has become its own kind of sport. He’s even written a book on the subject, Ticketless, which will be published later this year.Fortunately for you, though, Kraus has also imparted his decidedly niche wisdom to us. Below, you’ll find some guidelines to perfecting the art of the spin move.

Before we get to the tips and in case you haven’t been paying attention, the CIA is keeping tabs on Dave Portnoy and the rest of my esteemed colleagues in and around the greater Atlanta metropolitan area. I’m not down on location but I heard the houses are spread out to give the feds more ground to cover hence greater metro area. All around a bold and brilliant move.

The major issue fueling this illegal sting operation is the NFL’s uniform ban on Barstool from all league events, which is obviously an unenforceable measure as evidenced by this week’s headlines. Barstool is everywhere and unfortunately for NFL watchdogs, not all of us are wearing fluorescent turquoise clown shirts – just several NFL head coaches and hundreds of thousands of people.

Anyways, with The Big Game (*pukes, violently*) around the corner, wide-scale attention has been put on which Barstool employee will be apprehended next: 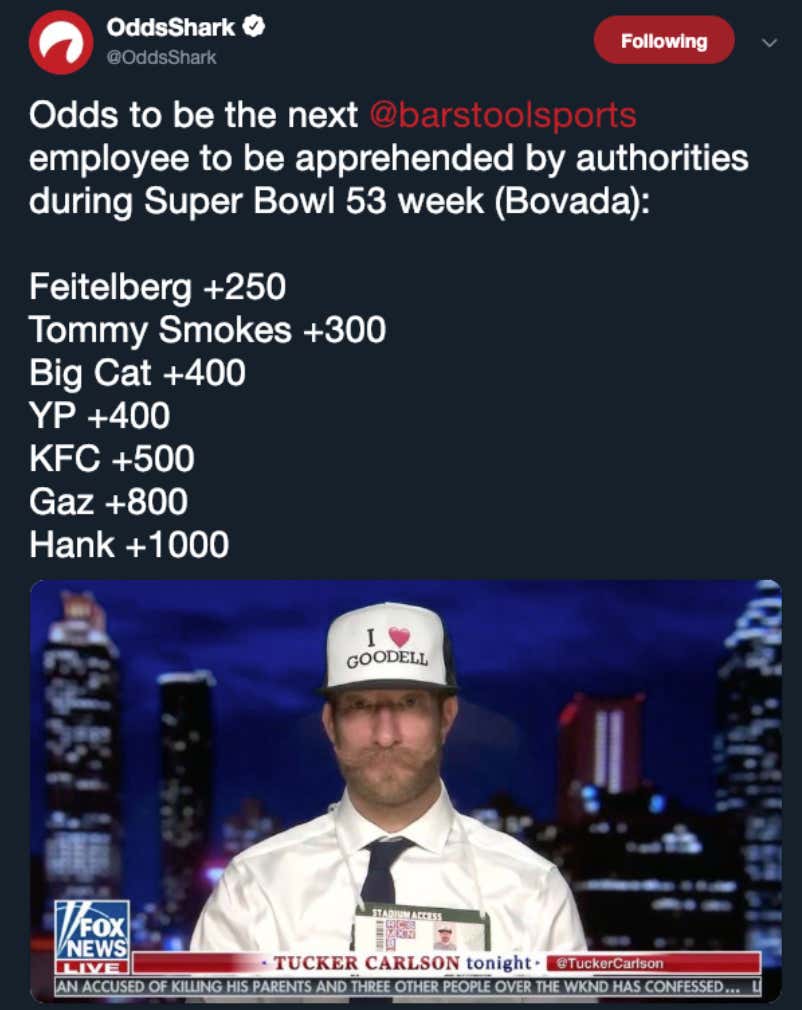 Generally we’re in the Headline game but this is new territory. This is better. This is just the Line game. Like find yourself a media company that creates BETTING lines off its content. I’ll be here waiting.

In the meantime, I’d be a liar if I said I wasn’t nervous for my guys in Atlanta. Even with this being their 9th trip since the turn of the century, getting kicked out of sporting events fucking BLOWS. And not to go down a personal rabbit hole, but I’ve been on the receiving end of forceable involuntary removal on several occasions and it’s always terrible. For that I blame the disgruntled off-duty law enforcement professionals tasked with enforcing proper sporting event etiquette. If these guys are lurking in every shadow of the United Center (and they are), then I can’t even begin to imagine the security personnel on hand in Atlanta this Sunday.

So naturally that forced me to this research. I want to help my coworkers out. Like Farva back at station on the radio, this is an opportunity to support my guys in the field.

Now obviously this is a huge opportunity that I’m giving to myself. I didn’t ask for it. No one handed it to me. My sole focus is simply keeping one or all of my coworkers/bosses/superiors out of jail because then maybe it’s me splitting the pullout with White Sox Dave next February, blogging from a pool of New Amsterdam Vodka while Eddie makes Daquiris. Boy that’d be nice.

But that’s a long ways away. For now we’re focused on Sunday and making sure I still have people to report to when the confetti falls. On to the tips:

#1 Get to the stadium or arena early to look for weaknesses. There’s only so much you can tell from seating charts and images online. He recommends arriving an hour and a half early to the game, so you can take a couple of laps around the stadium, see where the vulnerabilities are. You’re looking for a lack of security presence behind the ticket takers. If there’s not much, it’s far easier to get up to the ticket taker, pretend like you’ve misplaced your ticket and make a break for it.

Alright so full disclosure this is heavily predicated on breaking into the stadium, and then avoiding security. So maybe not direct crossover for those carrying actual tickets. But still a solid point to scope out the territory well in advance.

This I feel comfortable with for two reasons: first, some or all of the company has been in Atlanta since Christmas. Dozens of people have had plenty of time to evaluate weaknesses and take laps around Mercedes Benz stadium. The legwork is already done.

Second, everyone knows Barstool is all about well executed preparation. It’s such a way of life for us that I’m surprised I’m even addressing it. We’ll never be out schemed.

#2 Wear several layers. Once inside, Kraus almost always changes his clothes—most likely, by taking off a sweatshirt or windbreaker—to reveal a shirt that matches the color of the home team, in order to blend in with the crowd.

Big Cat always layers up to create confusion and keep a low profile. This is no different. Bob and weave, shed and move, light on your feet always.

#3 Don’t get greedy. “Part of my code,” Kraus says, “is you have to be flexible. You have to just accept having a view of the game.” That means you shouldn’t push your luck by trying to secure the best seats; head to the upper deck, take what you can get (even sold out games will likely have empty seats) and move from section to section periodically, if necessary.

I’m all for giving advice but if you think I’m telling anyone in Atlanta not to get greedy you’re out of your fucking mind.

#4 It’s much simpler than you might think, if you’re somewhat agile and willing to take the risk. “My theory is that a lot of security presence at North American sporting events is for show, rather than functional,” Kraus explains. “A security guard who sees me run …there’s not a whole lot of incentive for them to chase me or report it to their supervisor, because they’re getting paid part time…

Agility? Are you fucking kidding me dude? Hey Big Cat how’s your 3-cone shuttle… no thanks man I’m not trying to get laughed at. I’m trying to help my friends.

Fellas – you’re not agile. Don’t strain a quad on the concourse.

#5 Beware of spin move karma. For Kraus, the only quote-unquote “victim” should be the league. He tries not to sit in someone else’s seat, and he certainly doesn’t want to take someone else’s ticket.

Finally. Back to basics with the Us vs. Them mentality that got us here in the first place.

Again, slightly different here because the focus is more on avoiding security than it is on taking someone else’s hard earned private property rights. But on a broader level you want to monitor good karma levels. Maybe buy the section a round of tallboys upon arrival? Slip the usher an Alexander Hamilton on the way in to keep it hush hush?

I’m not sure what the right move is because like I said I’m not there. But if I was, you better believe I’d be slinging Italian Beefs in my section left and right. Carl you’re not allowed here. I know but I got a dry beef with light giardianera in my pocket with your name on it. Hey how ya doin.

But again that’s just me. I’d be buyin everyone a beef and as such I can guarantee no one would be asked to leave. 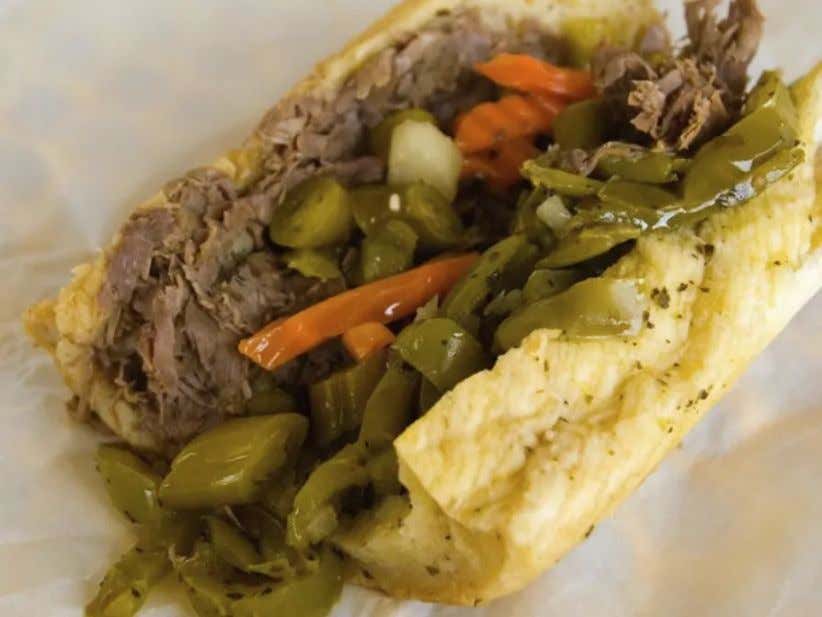