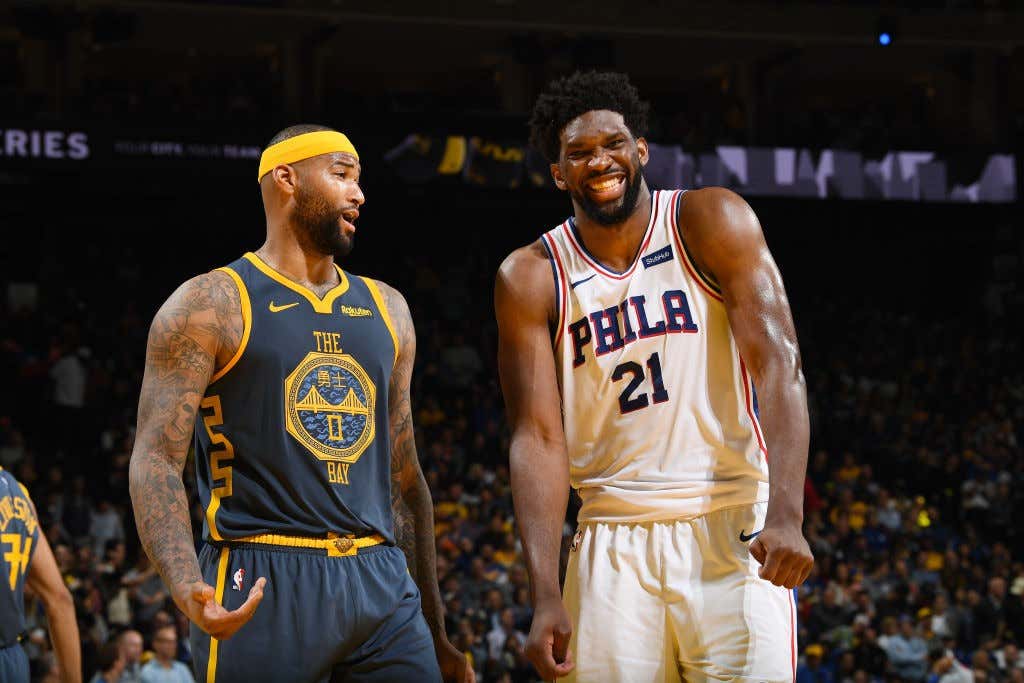 Good morning everybody happy Friday and welcome back to another edition of Last Night In The NBA where we bring you up to speed on everything that went down from the night before in the Association. There were 6 games on the schedule Thursday night including some of the best matchups we’re had in weeks and there certainly was no lack of entertainment. We had a little bit of everything from close games, epic collapses, and huge statement wins. I know you are looking to do anything but work right now, so why not kill some time this morning and enjoy a shit ton of basketball highlights? That sounds glorious to me. So if for whatever reason you were unable to watch any of the action, here’s what happened

The Mavs owned the news cycle yesterday with their blockbuster acquisition of Porzingis, and then again with the Luka All Star snub it almost makes you forget they actually played a basketball game on Thursday night. Obviously without the players they traded, the Mavs were also without Luka who sat for rest, and you add all that up and it’s no surprise they couldn’t crack 90 and shot 40/28%. I mean who was going to score for them outside of Harrison Barnes?

This is already a team that’s 5-21 on the road, but shockingly enough they were in this game the entire way! That was until the fourth quarter where they ultimately pooped their pants and scored just 19 points. Obviously they were in a tough spot yesterday with everything going on, but don’t let this distract you from the fact that they blew this win.

For DET, as we see pretty much every time they play, this team was carried by their outstanding frontcourt. Both Blake and Andre Drummond combined for over half their points

I think we got a great look at why Blake was selected as an All Star reserve and in my opinion it was absolutely deserving. As dominant as those two were, the best part of this game was Blake and Reggie Jackson going all Jackie Moon and setting back offenses for decades

This is actually the second time we had this in consecutive nights as Jokic literally just did this on Wednesday night. What is happening to the NBA right now?

The win gave DET a little life of catching CHA for the 8th spot as they sit just 2 games behind right now, and despite it being against a depleted team, it was still nice to see them play defense for one.

I take no pleasure in watching IND sink like a rock. Oladipo went down and it’s been 4 straight losses since. They’ve fallen in the standings and are at risk of dropping all the way to the 5th spot, and even though we all knew this would happen it’s still tough to see for a team that was having a really good year. Myles Turner held up his end of the bargain as the new #1 option in IND

but unfortunately their second unit, one that has been so strong for them all year didn’t live up to their expectations. The unit had just 16 combined points but despite all that, they too had a chance to win this game as they entered the final quarter with a lead. What came next? Collapse city. They gave up 38 points to ORL which was their most of the night and the next thing you knew they blew a very winnable game against a bad team. Safe to say things are rough for the Pacers right now.

For ORL, this is sort of what they do. They’ve shown us this year that when a good team comes into their building, they play them tough. Terrance Ross did a great job of upping his trade value with 30 points and 5 threes off the bench

which went nice with Nikola Vucevic’s 17/10/5, another guy whose trade value is through the roof

The Magic are going nowhere so it’s moments like these that they have to cherish.

By far this was one of the most anticipated matchups heading into the night. Top 2 teams in the East, two absolute wagons, this game was a little more important than you may have been aware of. You see chances are these two teams are very close all year in the standings, which means H2H matchup record becomes very important. MIL had the 2-1 lead heading into this game so the pressure was for sure on TOR to protect homecourt and even it up. Well, MIL flexed big time and made a pretty loud statement

For TOR, they have to be a little careful here. They’re starting to fall a little bit back to the pack and are 6-7 against the other top 4 teams in the East. That’s a stat I’m sure you weren’t expecting. It was an off night for Kawhi/Lowry who combined to shoot 11-34, so it was really up to Pascal Siakam to carry the load, which he did

This was just their 5th loss at home so I think they’ll manage, but I cannot stress enough how important it may be that they just lost the season series 3-1. TOR won’t lose many season series this year, but this might be the only one that matters.

These pesky Nets man, you just can’t kill em! Well technically they lost but you know what I mean, they are in every game it seems. Maybe that has to do with the All Star level season D’Angelo Russell is having, he had another 25/5/9 in this one

and they did have the ball with a chance to tie with 3.6 seconds left but Napier’s three didn’t drop. The Net’s haven’t lost many times over the last 50 days and they are pretty secure in that 6 seed so I doubt their sweating this too much. They just have to figure out how to not be under .500 on the road and things will look a whole lot better. They were still able to break 100 for the 12th straight game which is impressive given who they are missing and they did have 30 assists which is something you love to see as a Nets fan.

For SA, this is now their 4th win in a row and they are making a charge to catch POR for a top 4 seed. Derrick White was awesome leading the team with 2=6/6

which was paired nicely with LMA’s solid 20/13

This win moves S to 21-7 at home this season, undefeated on their current homestand and as we know with a Pop coached team you can never count them out. While they were productive on the court, the story here was the bat situation

Part of me thinks they were just waiting for Manu to retire before they decided to strike and you cannot convince me otherwise.

Another highly anticipated matchup, while it’s true the Sixers didn’t have to face Klay Thompson, this was still one hell of a win. Their win profile over this all important stretch is pretty impressive, but none are as impressive as going into Oracle and winning convincingly. They dropped 42 points in that third quarter which is usually something the Warriors do, and they rose the backs of their two unicorns who had some of their best games of the entire season

Ben Simmons pretty much dominated this entire Warriors roster which is intriguing because he did it all without a jumper. When he plays like this it opens up so much for the Sixers, and then you throw in some clutch JJ Redick threes and they look tough as hell. Remember, they got this win with Jimmy Butler going 3-12 from the field, which just goes to show how dominant the rest of the roster was.

The most impressive part though was the work they did on the defensive end. They held GS to just 18 fourth quarter points and never allowed them to truly go on one of those patented Warriors runs. Every time they cut it to like 6, the Sixers had some sort of big time momentum block or steal and moving forward that has to make you feel great as a Sixers fan.

Personally I find this nauseating, and I’d just like to give a good ol fuck you to GS. Can’t rely on you for anything I guess.

For GS, Steph was ridiculous as he often is with a cool 41 points and 10 3PM

and then Durant didn’t shoot all that well either with 11-24 and just 1-8 from deep. Turnovers were a problem for the Warriors and usually that’s what does them in, but look nobody is going to feel bad for this team. They had won 12 in a row before this and honestly nothing changes for them. They’re still the title favorites but I will say they’ve lost to every top 4 team in the East…..at home. They haven’t played BOS yet, but I like that trend.

Did you guys hear LeBron returned in this game? For a guy with a groin injury he looked OK in his 40 minutes in my opinion

He didn’t shoot all that well but his impact was clear. Suddenly the pressure was off someone like Brandon Ingram who responded well with an efficient 19/4/4

hell even fucking Lance got into the mix with 20 off the bench and some classic Lance celebrations!

They did blow a fourth quarter lead which is never great, this should have never had to go to OT, but once it did they were able to force the type of game losing TOs the Clippers couldn’t stop committing, and the rest was history.

For LAC, they’re trying to shake the little brother label, and Lou Williams certainly did his part to change that narrative

Sadly though, no other Clipper really helped. All Star snub Tobias Harris had a quiet 15 points outside of this one three

Avery Bradley couldn’t buy a bucket, and it was pretty clear how badly this starting group missed Gallo. They need his secondary scoring so badly. This was big because LAC has just a 1 game lead over LAL for the 8th spot, and the Lakers have now tied the season series at 1-1. They don’t play again until March, so time will tell to see if this actually even matters. Now with LeBron back, I think the Lakers are going to reassert themselves in the city of Los Angeles.

And that’s it! You’re now all caught up with everything that happened last night in the NBA. We’re back tonight with 5 more games but it’s Friday night and you should be watching RnR7 instead. Do that, and just back here in the morning and I’ll bring you up to speed on what you missed. Have a great Friday!