Source - Super Bowl-bound LA Ram CJ Anderson sent a series of steamy messages to a sultry pharmacy technician behind his pregnant girlfriend’s back before telling the woman: ‘I don’t do fat girls,’ DailyMailTV can reveal.

The 27-year-old running back sparked a suggestive conversation with Paige Gunnink, from Bozeman, Montana, on social media in September which quickly evolved into sexts, requests for ‘full body’ photos, and offers to fly her out to hook up with him.

But in an exclusive interview with DailyMailTV, Gunnink revealed their sexting fling came to an end after the athlete was unimpressed by her nude photos, fat-shamed her and suggested she lose weight.

In one exchange [Anderson] callously told her: ‘You got a stomach…I don’t really do fat girls.’ …

[T]he NFL star … is expecting his first child with girlfriend Raquel Torres, 24. … Gunnink admits she was hurt by his behavior, which she says rocked her self-esteem.

Source – Rob Gronkowski’s smokin’ hot GF says modeling agencies pressured her to drop serious weight in order to get gigs … but the NFL superstar urged her to not give in to their demands.

Camille Kostek said Gronk made her realize she shouldn’t have to conform to the crazy, unrealistic standards in traditional modeling … and it turned out to be some of the best advice she’s ever gotten.

“He had seen me get rejected by a lot of agencies,” Kostek said on Mark Dohner’s “Livin’ Large” podcast … explaining how she was sometimes told to lose 15 pounds in 3 weeks or to shed inches off her thighs in order to be considered for jobs.

Welp, there you have it. Two men. Two football guys about to meet in the Super Bowl. Two very, very different approaches to women’s body image issues and self-esteem.

This reads like a real life Goofus and Gallant cartoon. Gronk tells his girlfriend “I like you just the way you are.” CJ tells his sidebeef, “What’s with the gut, fatty? I’m not sticking my dick into that.” It’s sad to hear. You’d think a pro athlete would be nicer to a woman he’s never met as he prepares to fly her across the country and bang her behind his girlfriend’s pregnant back. But not all football players are the gentleman that Rob Gronkowski is, I’m afraid.

I regret the blow to poor Paige Gunnink’s self-esteem. It had to be rough. A lady has the right to expect better treatment from the guy she’s planning on cheating on his pregnant girlfriend with. Though you do have to admire her courage. Most people faced with that sort of blow to the ego would probably just close themselves off from the world and wallow in despair. But she did took the courageous step of contacting Daily Mail. And hopefully her story will be send a message to other golddigging starfuckers sending nudes to pro athletes in hopes of arranging hookups that they deserve to be treated with dignity and respect. Let her strength be an inspiration to us all.

This serves as one more thing for America to keep in mind as they watch the game Sunday. Do you want to root for CJ Anderson, who fat-shamed this beautiful, dignified woman? 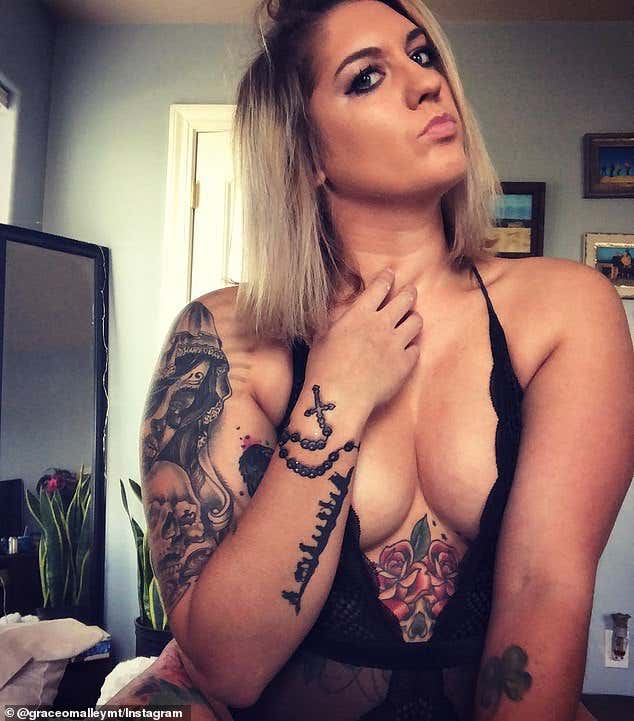 Or Rob Gronkowski, who empowers this woman by accepting her as she is, flaws and all?

I know where my loyalties lie. With Rob Gronkowski. And with women everywhere. #That’sMyTightEnd