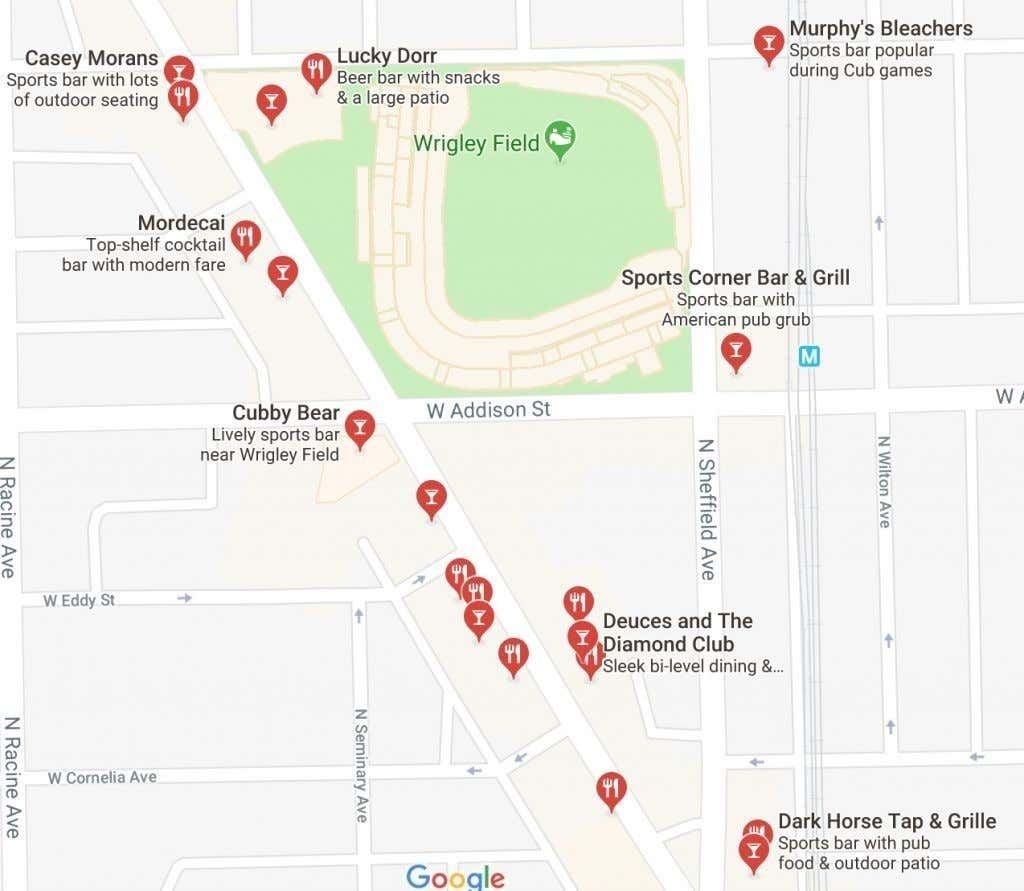 Welcome to the 4th installment of the 2019 Wrigleyville Bar Scouting Report, a weekly blog series documenting the best watering holes in and around Wrigley Field. You can find prior reports here:

Last week I shed some light on our 20-80 rating system, which is the same grading scale used by MLB scouts when evaluating ballplayers. It’s not that hard to figure out so just double back on that if you need to dust up on my logic.

Outside of that, these reviews are getting me progressively more excited for Opening Day on March 28th. The weather makes it seem like we’ll never play baseball again but in reality we’re less than two months away. It’s okay to be excited for baseball season. Some would even say healthy.

Let’s get to Irish Oak: 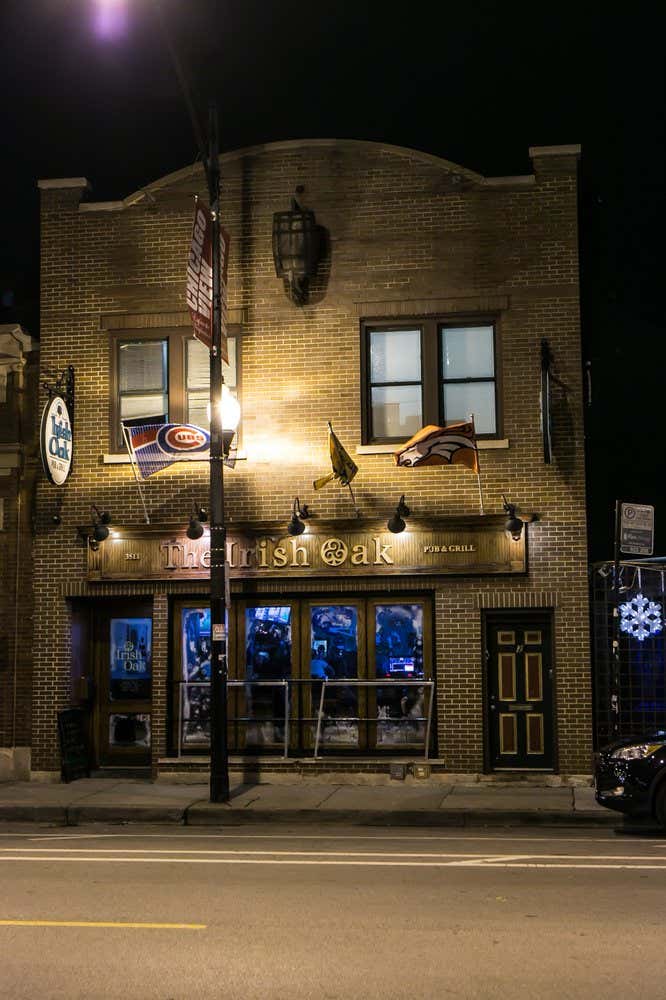 Overview: This often overlooked gem at 3511 N Clark is less than a block from the gates of Wrigley. For the Irish Pub enthusiast out there this one’s a classic for all the reason you love a good pub. Solid Guinness pours, stained glass windows, custom woodworking, a catalogue of fried foods, and of course a large padlocked cabinet of Jameson. 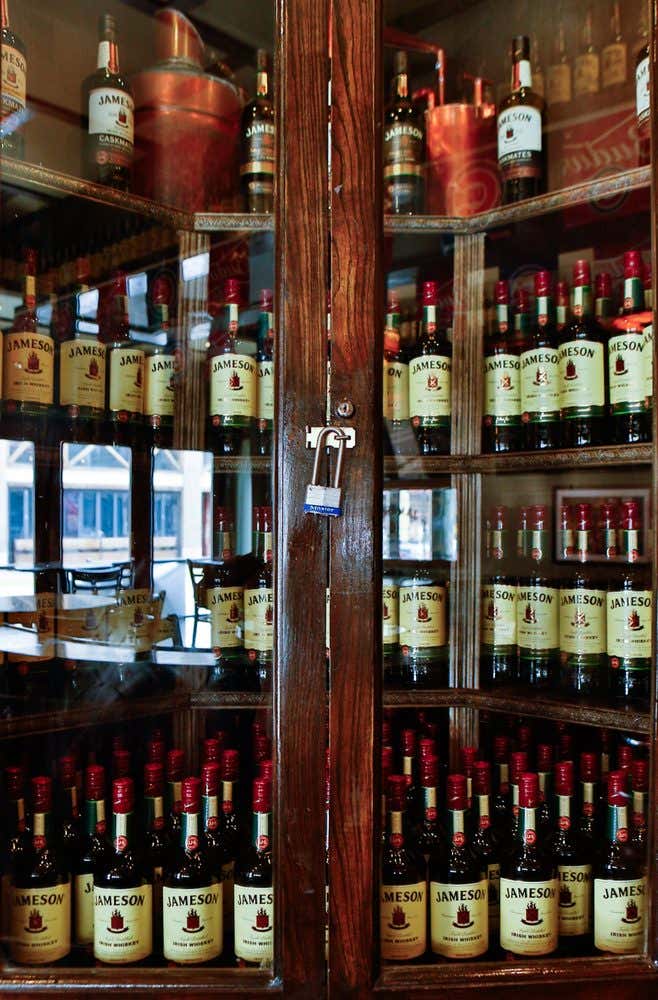 There’s no doubt Irish Oak is a unique animal in Wrigleyville that gets less attention than its beloved neighbors. And generally that’s unfortunate. Most of you have probably first experienced IO because the line for Red Ivy (RIP) was around the corner with people spilling out of Moe’s and JBC onto Clark. You and your buddies didn’t want to pay cover or wait around so you dipped in here for a couple beers. 3 hours later you’re still standing at one of the tall tables up front listening to live music and talking to some hot older women from just outside Aurora. They’re out celebrating a recent divorce and the Jame-o is flowing. From here, the story goes wherever you want to take it.

Bathrooms = 45. We have our first downstairs bathroom on the list. This isn’t too uncommon in Wrigley, see: Deuces & Diamonds, HVAC, Casey Morans. But nevertheless it still presents its own unique challenges, like walking up and down a flight of stairs after you’ve been in the sun for 6 hours. That’s not easy. Bonus points coming back though because there is never a bathroom attendant. That’s good unless you want to buy cocaine from a bathroom attendant then it’s bad. 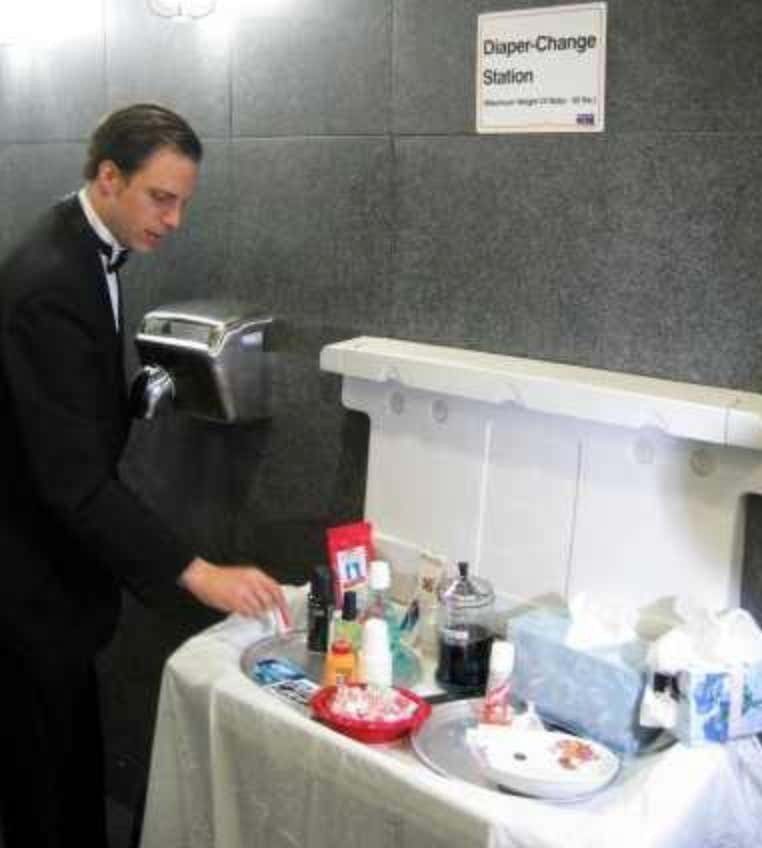 Patio = 45. Nail me to a cross for this one but there is no patio. So sure I guess that’s a 20 on your scale but I’m thinking holistically and there are two very compelling factors. First, the front part of the bar practically opens up like a garage door onto Clark Street offering up some of the best tables in the neighborhood. Options are limited though so that hurt. And again it’s not even a real patio.

The second and more compelling factor is the backroom, which I’m scoring under Patio here because there’s no where else to put it. I made a similar move last week with Old Crow’s rooftop, although that’s clearly an outdoor space. This one isn’t, so it can’t be higher than a 45. That said, it’s getting the full 45. 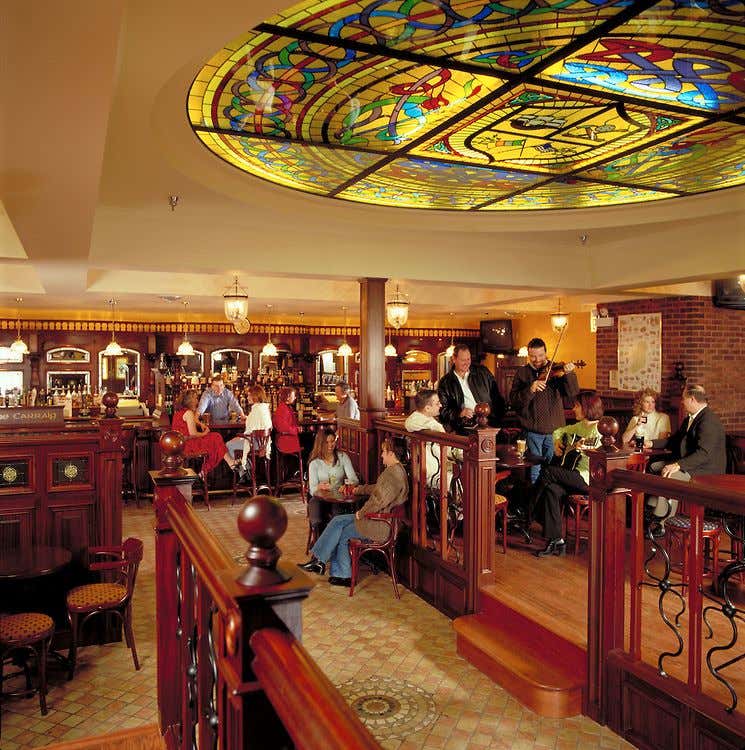 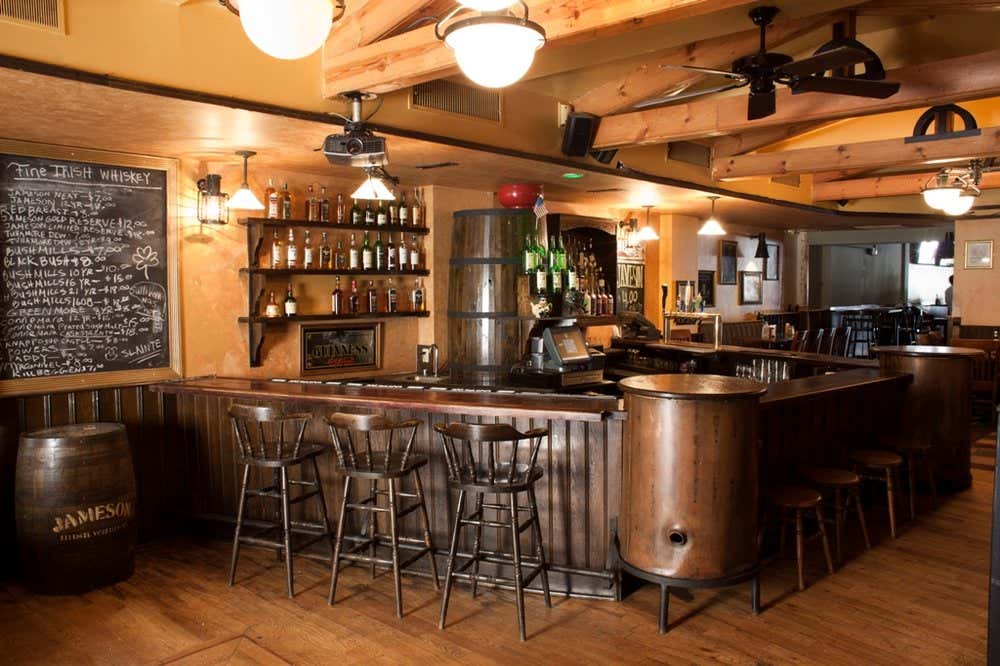 If you find yourself back there it’s because you’re getting hammered. No two ways about it. They have a few TV’s back there that get some playing time but generally you are there to grab a mini barstool (see above) and have Jameson poured down your throat. They’ll staff that back bar with 2 bartenders and serve 8-10 people crowded around on the handmade barstools. Like I said earlier, it’s a unique experience for Wrigleyville.

For those reasons, this is a fantastic post-game spot if you’re on the challenging Cubs game double date. You’re in the scene but you’ve got some legroom and a server in a really cool spot.

Atmosphere = 70. This one’s personal but I love an Irish Pub. There’s just a lot of value in being unique to me in Wrigley when it’s so easy to be the same canned piece of corporate shit. Irish Oak has survived as a family-owned pub for 21 years in an extremely competitive market and a lot of that has to do with its authenticity. Here’s some words from another review

The Oak not only offers all the classic Irish fare and drink you can handle, but also hires Irish waitstaff and everything found inside or outside the bar was imported from Ireland by owner Billy Lawless. Lawless used to own a pub in Galway and used the same Belfast designer create the feel of the Oak in 1998. Since then, Guinness sales along Clark have shot through the roof, and the Lawless family has no doubt counted their blessings for such an excellent location for an Irish pub. 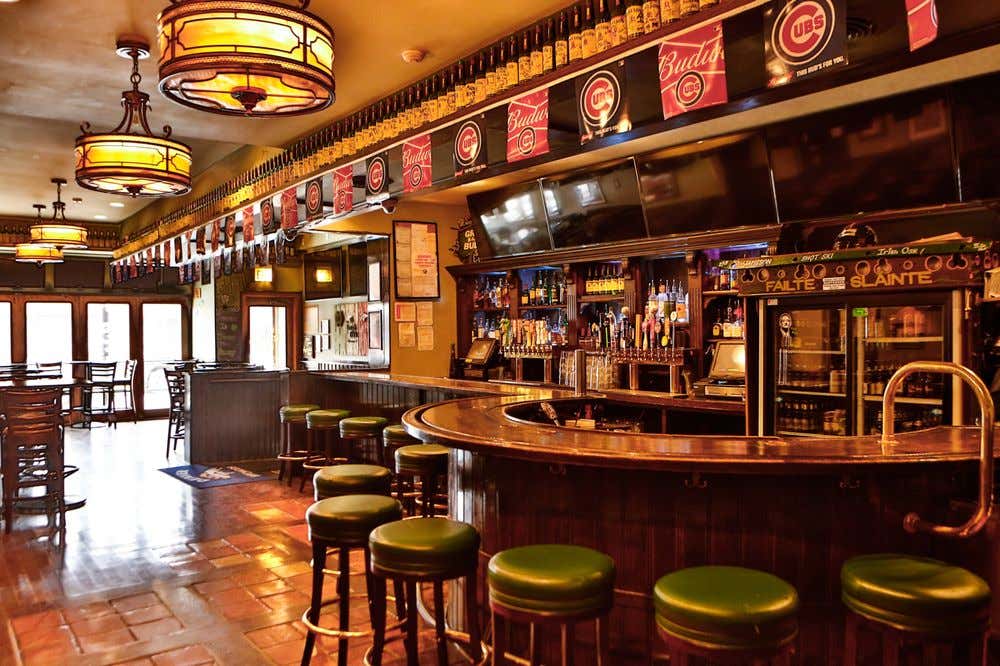 It’s also a great place to get a Miller Lite. Just want to be clear as I’m a full-time Miller Lite sponsored athlete/podcaster.

Drink Replenishment = 60. The Oak flexes muscle on drink replenishment because they have solid career neighborhood bartenders leading the way. Not a ton, but usually the folks behind the bar have a lengthy tenure serving drinks. That makes it easy opening/closing tabs, getting large orders of drinks + shots for a group, and splitting up a bill at the end of the night. There’s also a healthy roster of servers and they’re typically Irish students studying abroad hustling for cash so they’ll be buzzing around more than your typical DePaul dropout.

Intangibles = 60. I’ve given Oak a lot of shine already on the atmosphere and backroom so I can’t go double jeopardy and repeat those here. Instead, I want to spend a brief moment recognizing a brilliant marketing strategy: Irish Oak is a Denver Broncos bar. 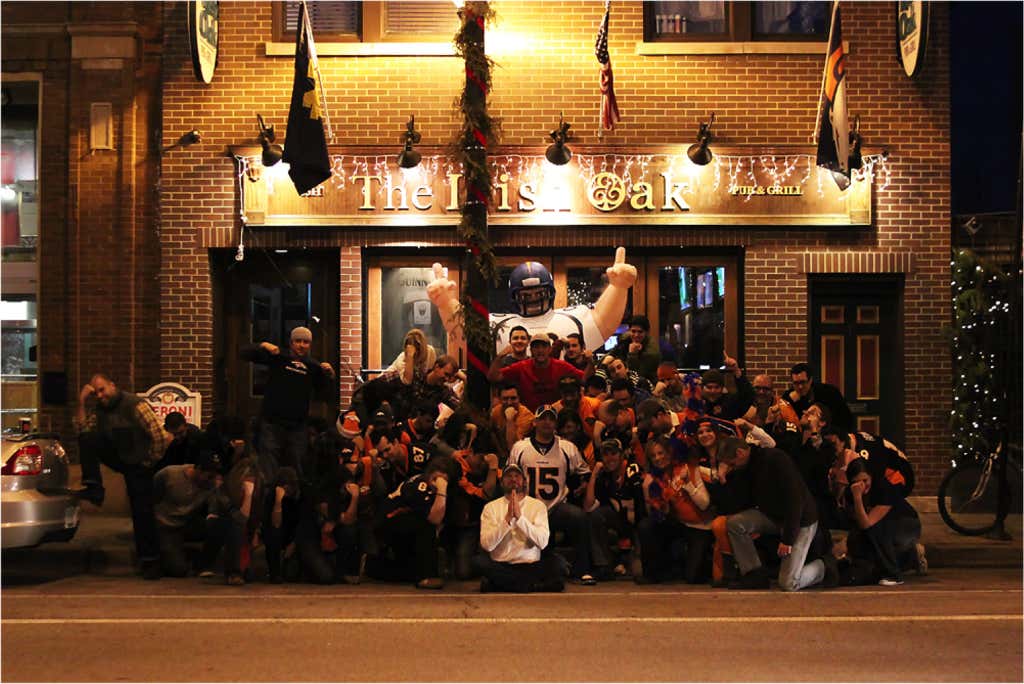 This is no new phenomena in life. Bars across America have adopted college and pro teams to attract people and honor the owners’ roots. Classic examples in Chicago are Delilah’s as a Buffalo Bills bar, Duffys for Michigan, Will’s for Wisconsin, etc.

But in those cases there are usually strong attachments to the native team. Irish Oak literally on the other hand has zero connection to the Denver Broncos. They just wanted a reason to draw people on Sundays.

If you remember back in 2010 the Broncos drafted Tim Tebow. At the time my buddy from law school was bar-backing Thursday-Sunday making a couple extra bucks. It was early September he had hear the manager complaining that no one was coming in on Sundays and he kept cutting people early. So, legend goes, my buddy offered up turning it into a Broncos bar. Why would we do that? People love Tebow.

He was right. Instantly on Sundays Broncos fans started swarming to Irish Oak for the games. My buddy got promoted to bartender immediately and with that came a boat load of free drinks. I’ll always respect the Denver Broncos for this. I benefited TREMENDOUSLY from this marketing campaign. Great time in my life indeed. 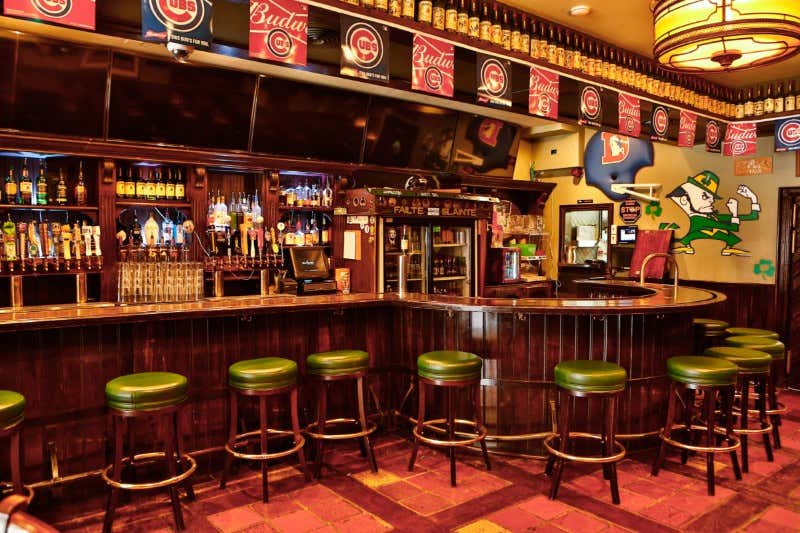 Outside of that you get live Irish music here quite often and a lot of people have Irish accents. Both employees and patrons. The main bar is uniquely designed and I think they automatically give you 1 out of 5 shots of Jameson for free. Or maybe I’m just imagining things. Idk. I just feel like the tab is always less than what I imagine. Bravo, Oak.

Overall = 55. This is a 5-hitter in your lineup. It’s not the premier bat in your lineup, has some weaknesses defensively. Maybe not the fastest runner. But you’re not hitting 5th to do all that bullshit. You’re hitting 5th because you can drive the ball with authority and score runs.

That’s Irish Oak. You’re here to get loaded. Not a place you go to rally with the boys or meet smokes. You’re not there showing mom and dad around the neighborhood. You’re there pounding booze before or after a Cubs game, prepping your buzz for the bleachers so you don’t go broke on $10.50 tallboys.