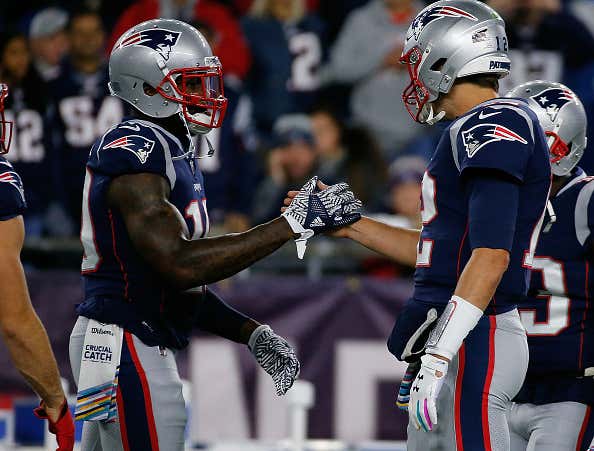 Source – While the New England Patriots are getting set to take on the Los Angeles Rams in Super Bowl LIII, wide receiver Josh Gordon is staying out of the spotlight while he serves an indefinite suspension for violating the terms of his reinstatement into the NFL.

A source with knowledge of Gordon’s situation told NESN.com the suspension was triggered by diluted drug test samples.

Gordon currently is receiving treatment at an inpatient facility in Gainesville, Fla., the source said. Gordon was spotted at a Gainesville-area gym earlier this month because he has been granted freedom to work out based on time spent in the facility.

The Patriots are paying for Gordon’s treatment, the source said. The Patriots declined to comment on the situation.

The team, the NFL and the NFL Players Association are working with Gordon to treat his drug addiction. The goal is for the receiver to function in life and football.

Remember Josh Gordon? I honestly don’t think he’s been a signal on my mental sonar since I went to the Week 17 Jets game and the guy tailgating near us was wearing a Gordon Patriots jersey. Which was either the worst investment of the year at $99.99, or a steal if he got it off the clearance rack as a combination conversation piece/Halloween costume for the next year or so.

Anyway, so much as gone on it’s easy to forget about Flash. How at the time he got suspended he was leading the team in receiving yards. How much Brady trusted him, targeting him five or more times in six out of seven games. The way he gave the passing offense an element it’s rarely ever had and was an absolute piece of heavy equipment on his blocking assignments. More than anything, the way he assimilated into the locker room culture and seemed to truly be straightening his shit out and flying right. But now he’ll be reduced to not much more than a couple of lines said about him over three or four highlight catches in the DVD, assuming the 2018 Patriots earn themselves a DVD.

Still, it’s good to hear the team is taking care of him. It’s been pretty unclear how much of an emotional attachment the organization had to an obviously troubled guy who had more issues that Us Weekly long before they brought him in here. All you could do is wonder whether the team felt let down and lied to like so many people trying to live and work with addicts. Or if they decided to stick by him and hope he finally slays the substance-abuse dragon that’s been destroying his career since it began. Now we have our answer. And it’s to the credit of the organization they haven’t turned their back on him.

Because I’ve never dealt with a situation like this and need to reduce it to something my simple brain can grasp, I’m going to picture Josh Gordon exactly like Shooter in Hoosiers. Drying out in a hospital bed, trying to get clean and sober, and inspired every step of the way on his road to recovery by the success of those boys who helped him regain a sense of purpose in his life. Here’s hoping it works out just as well for Gordon as it did for Shooter.

Godspeed, Josh Gordon. Here’s hoping you get back to the Patriots someday. Don’t get caught watching the paint dry.