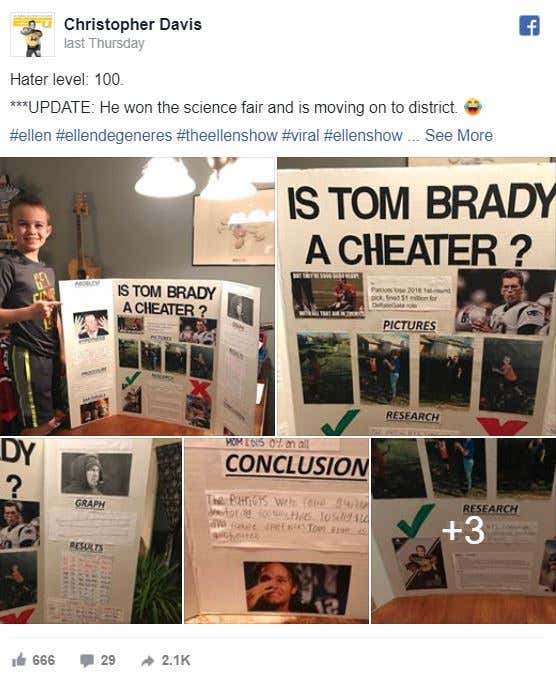 YAHOO - Meet Ace Davis, a 10-year-old kid from Lexington, Kentucky who created a science fair project about Tom Brady. While kids in New England might be trying to figure out how to scientifically prove that Brady is the greatest quarterback who ever lived, Ace decided to go in a different direction. He created a science fair project that proves that Brady is a cheater.

Ace sought to prove that Brady was a cheater through science. He wanted to show that deflated footballs gave Brady a competitive advantage. On his poster, he included the results of experiments he did with his mom and sister. Each of them threw footballs of varying inflation, and he measured the distance of each one and calculated the average. He found that the least inflated football traveled the farthest, therefore giving Brady a competitive advantage.

How did you come up with the idea for your science fair project?

Because I hate Tom Brady, he’s been accused of cheating before, I want him to be caught.

If you could share a message with Tom Brady what would you say to him?

Gimme some of your money, you don’t deserve it.

It doesn’t hurt to ask, right? Ace also predicted that the Los Angeles Rams would win the Super Bowl 30-14 after Brady throws three interceptions and Todd Gurley runs for two touchdowns. Ace won his school science fair, and is now headed to the district science fair.

What a fucking asshole this kid is. And it’s not just that he hates Tom Brady either. Everybody hates Tom Brady, but what kind of fugazi science project is this? I mean if I’m understanding this correctly his entire thesis was based on that fact that since his fucking puss ass arm and his unathletic mom threw the ball longer with deflated footballs that means Brady cheated? Hey dickface that’s not what deflategate is about. It’s that the balls deflated naturally because of the weather. Ideal gas law…ever heard of it? Didn’t think so. So why don’t you stick with fucking watching cartoons and and leave the big boy stuff to the scientists at MIT and Harvard who already proved Brady was innocent. And the worst part is this kid won his science fair with fake shit? Who was the judge? Goodell?  Such a joke. I hope somebody stuffs this kid in a locker and takes all his lunch money.  I hope Ben Brady and that big old hog of his fucks the shit out of this kids girlfriend in 10 years.

PS – What type of asshole 10 year old has the name Ace?  You should have to earn that name.   Only dickhead parents would give their kid that type of dickhead name.  That’s how you end up with this type of dick sucking for a fake ass science project.  Fuck this kid.