I’ll be spending some time today educating the masses on Ken Griffey Jr. Baseball on N64. I wrote a Sammy Sosa blog yesterday and in it I argued that the KGJ on N64 was such a good video game *BECAUSE* all of MLB was juiced out of their skull on steroids at the time. So in effect, the game’s performance was significantly enhanced.

Unfortunately I heard from people who did not know what I was talking about and that obviously is unacceptable. So plan on a little of that later. For now, I need to give my guy Randy Johnson big time shine because he was easily the most dominant pitcher in KGJN64 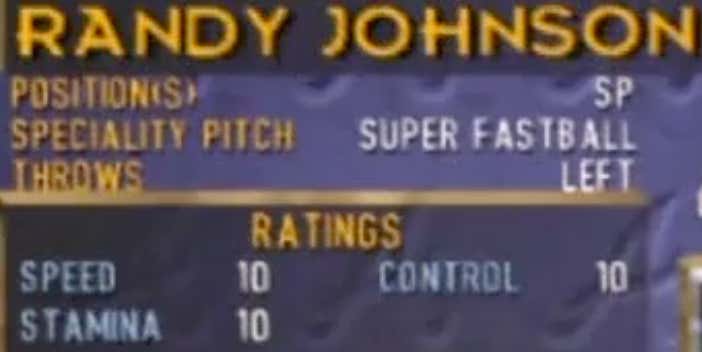 Specialty pitch is a 103mph Super Fastball from the left side. You don’t get that kind of heat without this game being made in the heart of the steroid era. Fuck even Kevin Brown, who you probably just remembered for the first time in like 10 years, was throwing 100mph sinkers in that game. Those really were the good old days.

For more context on how nasty Randy Johnson was in real time I’ll turn it over to the Kid and Big Papi. Pretty hard to make two first ballot HOF’s this uncomfortable:

PS – Is Ortiz first ballot? Idk. Big steroid guy but everyone loves him.