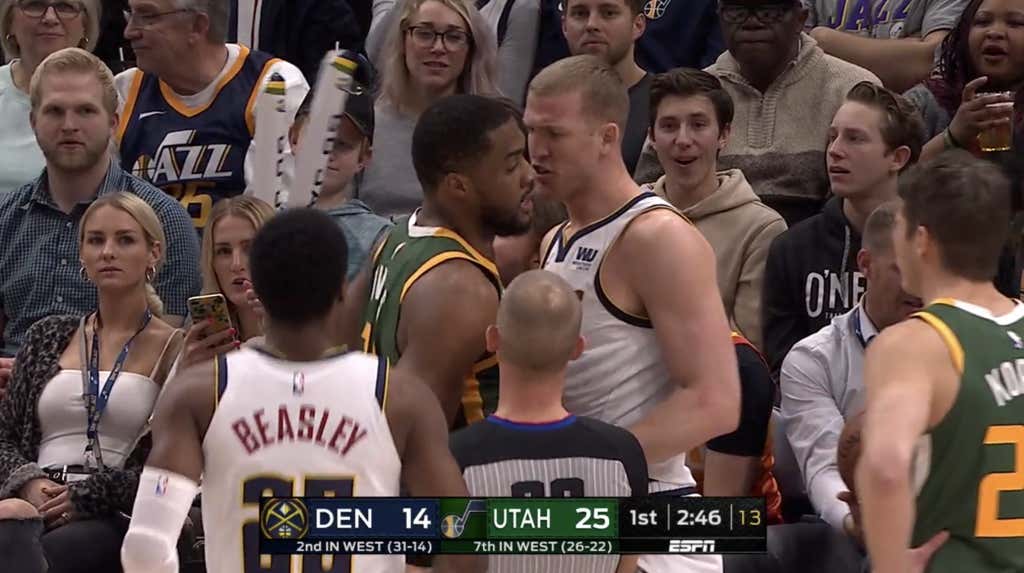 What the hell is going on in the NBA right now? Guys are starting to lose their shit and every night it seems we have another dust up. Tonight it was Derrick Favors vs Mason Plumlee. It was clear that Plumlee had a problem with extra curricular activity under the basket, said something, and from there Derrick Favors gave a solid shove. The only mistake here is he did it against a Plumlee. I dunno about you but I am NOT fucking with a Plumlee brother. Just something about them give me a vibe that they are tough as hell and not someone to be trifled with. You can ‘t be in the league as long as Mason has without being tough, and I’m just not sure Favors was aware of what he was doing. Plumlees are a weird fucking breed of human, I would want no part of that. He just seems like a guy that will fight with nothing to lose. Imagine growing up in that house with two other brothers? At least I think there’s only two other Plumlees, at this point I have no idea, there may be as many as 10. I imagine they got into quite a few brawls over the years. Mason is the middle one too, so he’s rolling with all that middle child anger too. That’s a recipe for disaster and Derrick Favors is lucky he walked away from this alive.

And how about that fan coming from the crowd to save the day? Blue shirt guy came to the arena to be a hero tonight. Not the hero we need but the hero we deserve. That takes guts so my hat is off to him. That’s just the nice people of Utah doing their thing. They hate to see anyone fight, or maybe he knew Favors was a split second away from his life being taken.

Unlike the Devin Booker fight the other night, at least this one had some contact. They both got tossed of course, and now I need to know if they somehow are meeting in the tunnel. Yet another example of why we need a tunnel cam. You see Jokic come off the bench so that’s a little interesting he’s still able to play but maybe that’s because he didn’t get involved. I’m not sure if the league just needs to get to the All Star break already, but things are getting testy out there.

Cue the hockey hardos that this isn’t even a fight. Whatever, let us have this