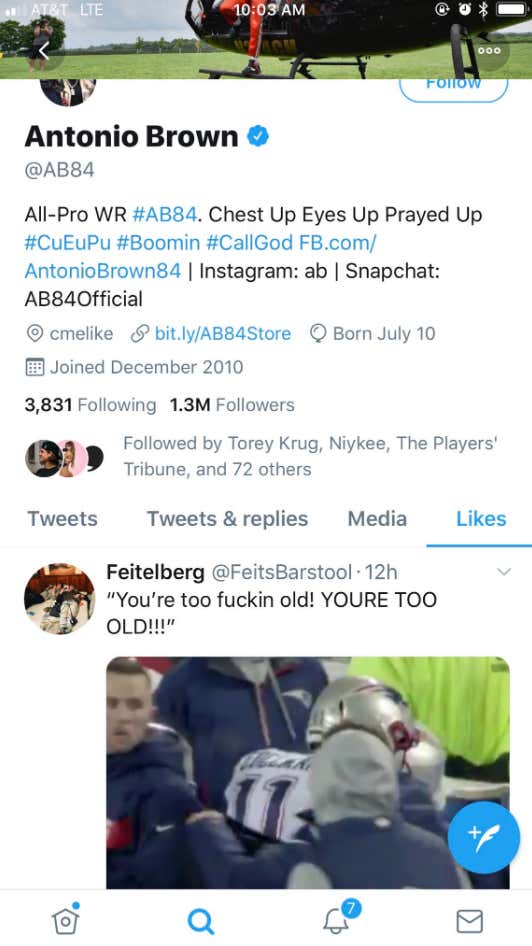 My least favorite thing on the internet is when NBA Twitter goes crazy and reads entirely too deeply into every social media action from players. Having said that, let me do exactly that.

Last night, I posted this video of Edelman mic’d up during the AFC Championship, screaming at Brady that he’s too old after throwing a dime TD to Dorsett. After posting I got into bed and watched The Punisher, a show where everyone walks around completely soaked in blood, to relax before falling asleep. I awoke this morning at around 8 o’clock to the sounds of my first of 7 scheduled alarms then fell bask asleep, as I always do (my first alarm is Taylor Swift’s version of “Bette Davis Eyes” and progresses in intensity until it reaches Run The Jewels’ “Blockbuster Night Part 1″). Anyway, when I woke up at 8 I saw the notification on my phone that Antonio Brown had liked my tweet. When I woke up for good 45 minutes later I thought I had dreamt it, as the push notification had disappeared when I woke up the first time and opened my phone. I went over to Antonio’s twitter page and sure as the sun rising, there was the like, for all the world to see.

Now I don’t know exactly what this means, but to me it’s an all-world talent saying “damn, wish I had that relationship with my quarterback. That’s a leader I’d buy into and respect and love. That’s a team I’d bond with and a coach I’d listen to and an environment I’d thrive in. Hell, I’d play there for free and always be on my best behavior.” Perhaps I’m reading into it too much or putting words in Antonio’s mouth, but I’m not so sure. Every like means something different. Some simply say, “You look hot here,” others say, “Nice picture of your dead grandmother, I’m sorry she’s gone,” and every once in a while you get a like that says as much as I think Antonio’s did.

I don’t even know how it would work but goddamn would I love to watch Steelers fans lose their goddamn minds over the Masked Singer being the new LeGarrette Blount who forces his way out of a toxic situation in Pittsburgh to come to New England, buy in (or, back in), and win a few Super Bowls.