Since 2006, I have been rating every movie I see throughout the year on a 0-100 scale. I have a methodology that I have laid out before and can put at the bottom of this post. Starting today, and lasting until January 31st, I will be counting down my 2018 movie rankings from number 205 all the way to the number one top spot! For the next two weeks, I will be doing two sets of movies per day and then finishing with 10 per day. Today’s rankings will cover movies 091 through 110. Enjoy! 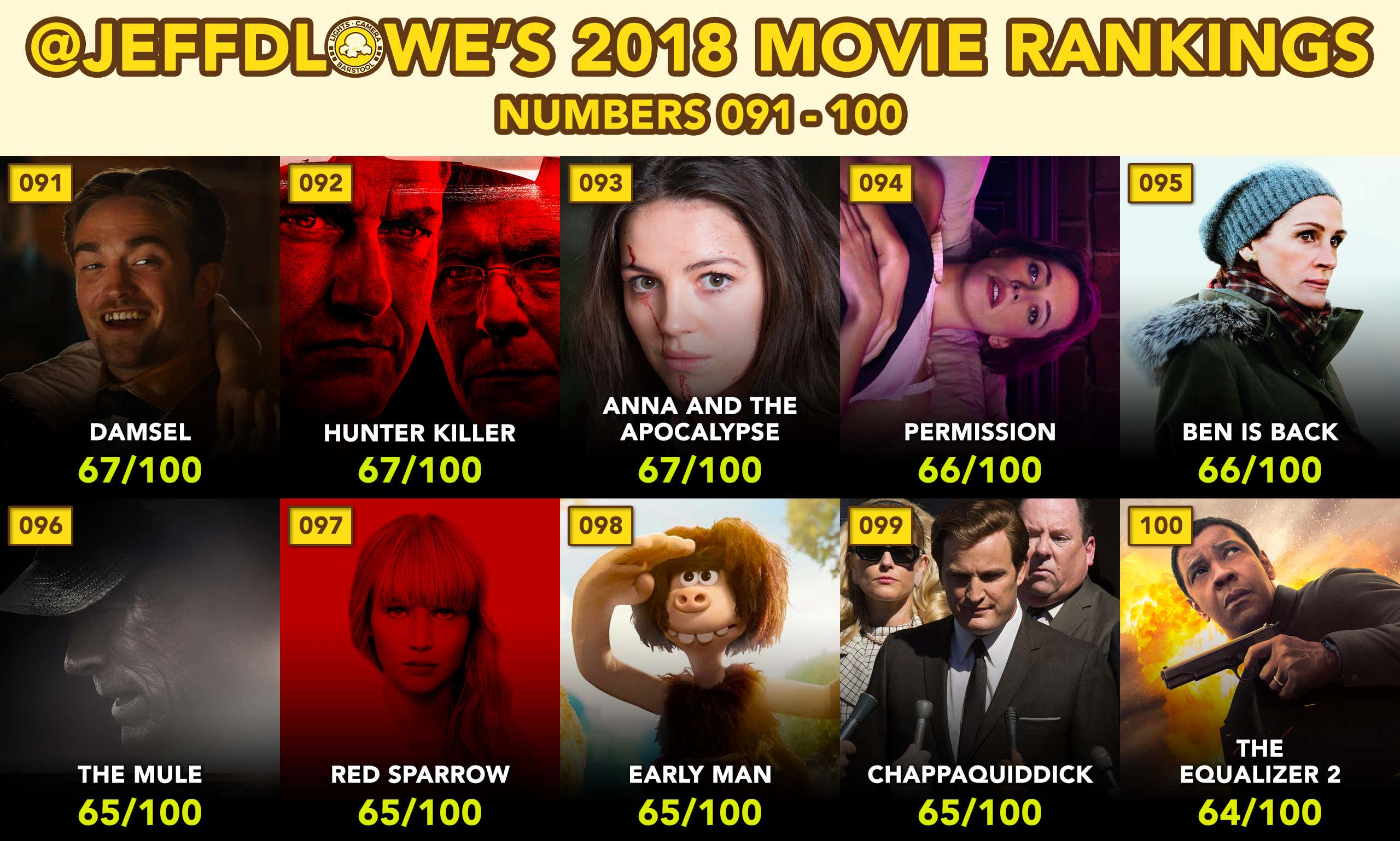 091-100: Here we go, the Top 100! Normally that would sound great, but this chunk of movies features no Officially Buttered titles. They’re close, but ultimately that only matters in horseshoes and hand grenades. Isn’t that such a classic old person comment? It’s fitting, because ‘The Mule’ is in this grouping of 10 movies. Clint Eastwood made an okay movie with a great cast that was bogged down by a boring ass script and story. I’m not saying the legendary Eastwood needs to hang ‘em up, but he is getting close to that moment, especially after ’15:17 to Paris’. ‘The Equalizer 2′ might not be a classic movie in terms of quality, but it gets the job done for the genre. If you want a solid action movie, it’s a great pick and you should expect it to be a TNT or FX re-run for years to come. ‘Hunter Killer’ is another movie that fits the bill. It has a great cast, solid action, and intriguing enough storyline. While it might not be perfect, ‘Hunter Killer’, a big-time “dad movie” should satisfy most viewers. The movie was also criminally undersold marketing-wise, so there’s a chance you’ve never even heard of it. Everything else is mostly watchable and worth the time investment. ‘Early Man’ is a decent Wallace & Gromit Universe movie and ‘Chappaquiddick’ is serviceable, but continues the trend of uninspired, boring political dramas. ‘Anna and the Apocalypse’ is just a worse, albeit somewhat fun, version of a Simon Pegg doomsday movie. 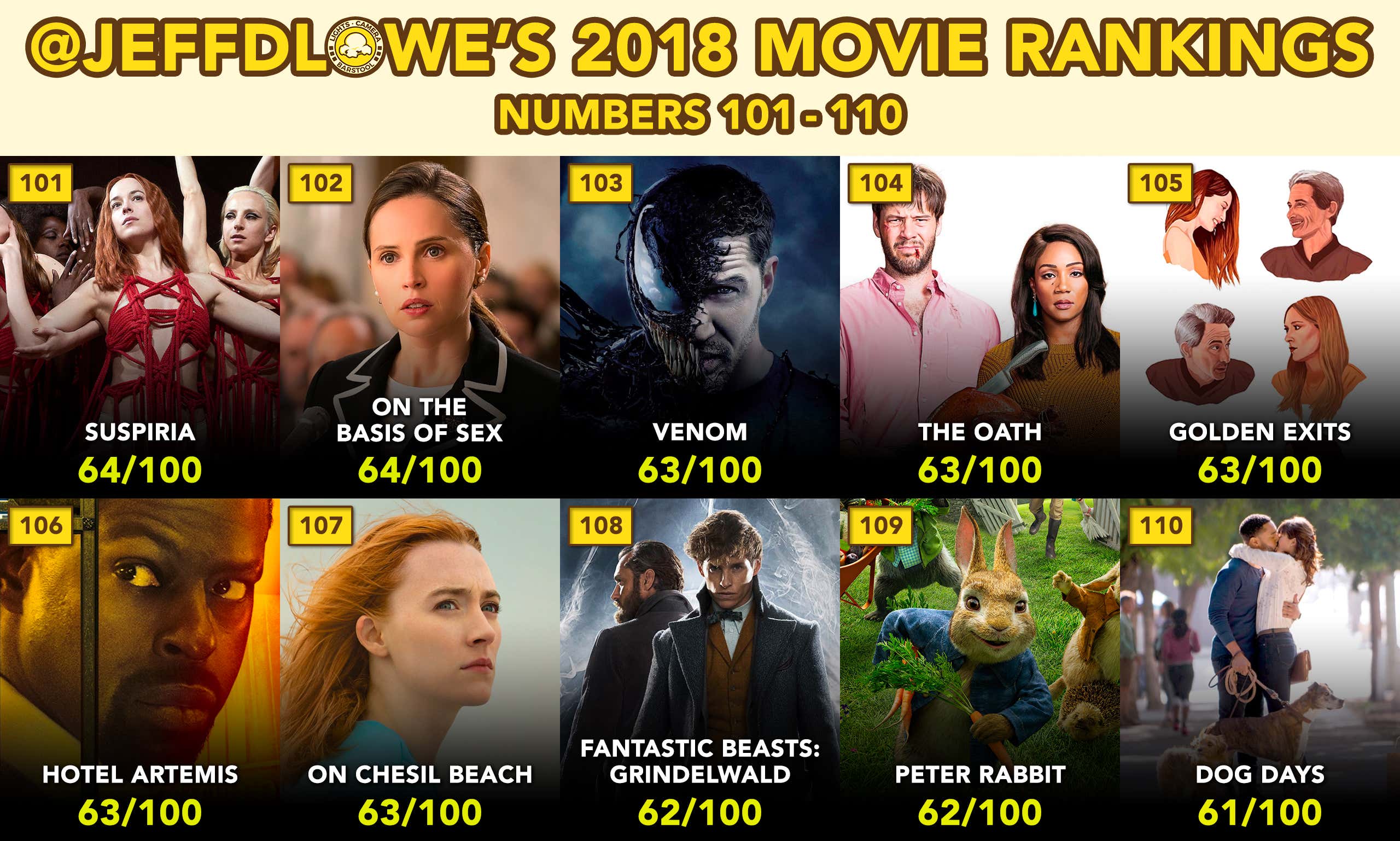 101-110: There are a couple very notable movies in this group of 10, but I want to kick it off with the most controversial movie we have ever reviewed on Lights, Camera, Barstool: ‘Fantastic Beasts: The Crimes of Grindelwald’. It was, in my eyes, objectively not good, despite some good moments and a solid performance by Jude Law as Dumbledore. The story is a complete mess, though, and jam-packed with way too many characters. I did like it more than the first movie in the franchise, but that isn’t saying much! A very, very angry Reddit user went after us on the Lights, Camera, Barstool Reddit, and the post is a must-read. I expected ‘Venom’ to be pretty terrible and it ended up being a fun movie. It doesn’t reach the top-tier level of the Marvel Cinematic Universe movies, but there is at least something for Sony to build on with the franchise. Three movies with some of my favorite actors and actresses, ‘On the Basis of Sex’, ‘Hotel Artemis’ and ‘On Chesil Beach’ didn’t quite live up to what I expected. In ‘On the Basis of Sex’, I enjoyed Felicity Jones but the Ruth Bader Ginsburg biopic was a bit bland. The story in ‘Hotel Artemis’ was sloppy, even though, as always, I enjoyed Sterling K. Brown. Lastly, ‘On Chesil Beach’ is another movie that I struggled to get through, not to the fault of Saoirse Ronan who is always the class of her movies. ‘Peter Rabbit’ is a movie that exists (James Corden!!!) and is widely known for the food allergy community going after some of the story’s choices. Lastly, ‘Suspiria’ is a wild trip of a movie and I give it a ton of credit for being daring and taking a chance. It won’t work for everyone, as it is a jarring movie, but I liked it much more than I expected to like it. I am also a Dakota Johnson stan. I love her work and am glad, as I mentioned a few days ago, that she out from under the stupid ‘Fifty Shades’ franchise.