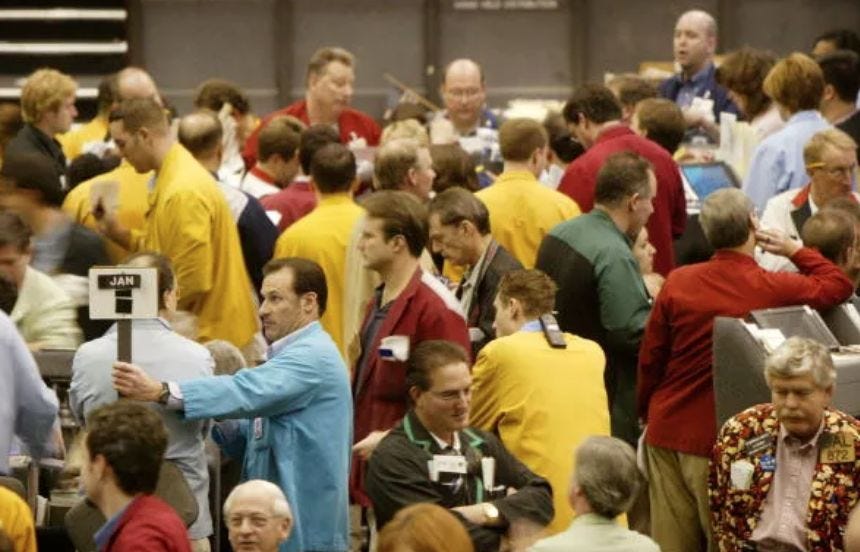 We're back for another round of Traders Are Insane submissions, a weekly series where I share some of the most ridiculous stories of traders doing EXTREMELY ridiculous/immoral/illegal/stupid things. If you can stomach the idea of a few decent hookers and an eightball for lunch then this might be your bag. You can get familiar with the series here:

Personally the most interesting part of this blog series is the stack of submissions I will *not* be sharing. My moral compass/common sense has somehow managed to filter out a number of your emails from making it on this blog, but my imagination has grown leaps and bounds in the process. It's like my brain is in a Mexican stand off reading some of this shit.

Normally I can stomach a lot but this week just got straight up weird. And that doesn't include the guy who left me his number and told me we could "only do this over the phone" because he can't put any of it in his own writing.

I don't even know what to say to that so let's just get to this weeks stories.

About 5 years ago myself and the owner’s son of the firm I was working for went to a large grain conference in Bangkok that takes place every 2 years.  It’s the largest one in SE Asia and is basically a 3 day debauchery filled week of a lot of slapping each other on the back and telling each other what kings of the world we were and hook ups with the Thai co-eds that work around Soi Cowboy, Nana Plaza, etc...

Anyway my bosses son is on his first trip to Bangkok and had what fan be described as a problem with prescription medicine… the first night there we hit up Bed’s supper club with a few brokers from the Singapore office and are all having a hell of a night and he is absolutely out of his mind. Well I lose the boss’s son for about an hour and can’t find him. After stumbling around the club for a bit I finally find him with what appear to be 2 insanely hot Thai girls all over him. He sees me and is like “come here” he’s making out with one of the girls and is like let’s go to the room.

So I grab the other 2 brokers and we get 2 cabs and decide to hit up our hotel bar with the Thai girls and then call it a night. On the way to the hotel for a nightcap I noticed something a bit off about the “girls”. I was insisting that I don’t think they were girls at all, and my boss’s son is getting a handy and fingering the girl in the back and I’m pushing the other one off me in the front of the cab. We get to the hotel and the Singapore brokers are dying laughing because they realized what was up and now my boss’s son is sobering up and starting to think maybe not is all that appears.

Me being a Bangkok veteran I asked the concierge if the ladies were really “ladies” or might have or had a few additional parts. The Concierge starts laughing and says “LADYBOY, LADYBOY, LADYBOY… HAHAHA”

My boss’s son is humiliated and decides to go all Mike Tyson on them and starts punching them and beating the shit out of them. Police are called and my boss’s son is arrested, and spends a day and a half in jail and misses the morning section of the conference. Of course I cover for him, but when he finally arrives word has spread around the participants that that is the American guy who got tricked by the Ladyboys and landed in jail. His father was so embarrassed he put him back on the first plane back to NYC and he didn’t travel again for about 3 years.

Moral of the story is you never really know what you are going to get in Bangkok.

WHO PUT THIS DICK ON MY BACK

A simple but hilarious prank that always gets pulled on the floor is “shark finning.” You’ll take one of the cardboard trading cards that you track your orders with, cut it into the shape of a shark fin, put a couple of staples through the base so only one end goes through and the other will act like hooks. Most trading jackets are made out of mesh, like a gym pinny you’d wear when running scrimmages, so these things will hook right on. I know this all sounds stupid and juvenile, but when everyone on the floor is chanting the opening theme from Jaws and you don’t realize you’re the shark is akin to getting picked last for kickball.

Put Your Dick Away, Sir *Author's note: lots of dicks this week I'll leave it up to you if that's a good/bad thing

Years ago myself and a colleague were working late in the office. We worked on the investment banking side of the business (so longer hours than the traders at our firm) but we knew all the guys on our equity trading desk well. We left the office around 1am and went for a slice of pizza before heading home. One of our best traders at the time wheels up across the street in his white lambo and both doors fly up and his drunk ass comes stumbling into the pizza shop where we’re eating. After buying the entire line slices of pizza, he comes to sit down with us because we’re sitting across from 3 girls who were out clubbing that night. After obnoxiously hitting on all of them (note: they weren’t having any of it) he proceeds to whip out his D and start doing the helicopter right in the middle of the pizza shop. Then he picks up his pants, re-buckles his belt, takes one last bite of his zza and walks out of the store back into his white lambo (note: both doors were still propped up lol). Anyway, the best part of the story was watching the looks on these girls’ faces go from complete disgust to completely turned on by the whole sequence of events they had just endured when they saw it was his lambo.

DISCLAIMER #1: I don't recommend dick helicoptering anyone much less in the middle of a pizza place 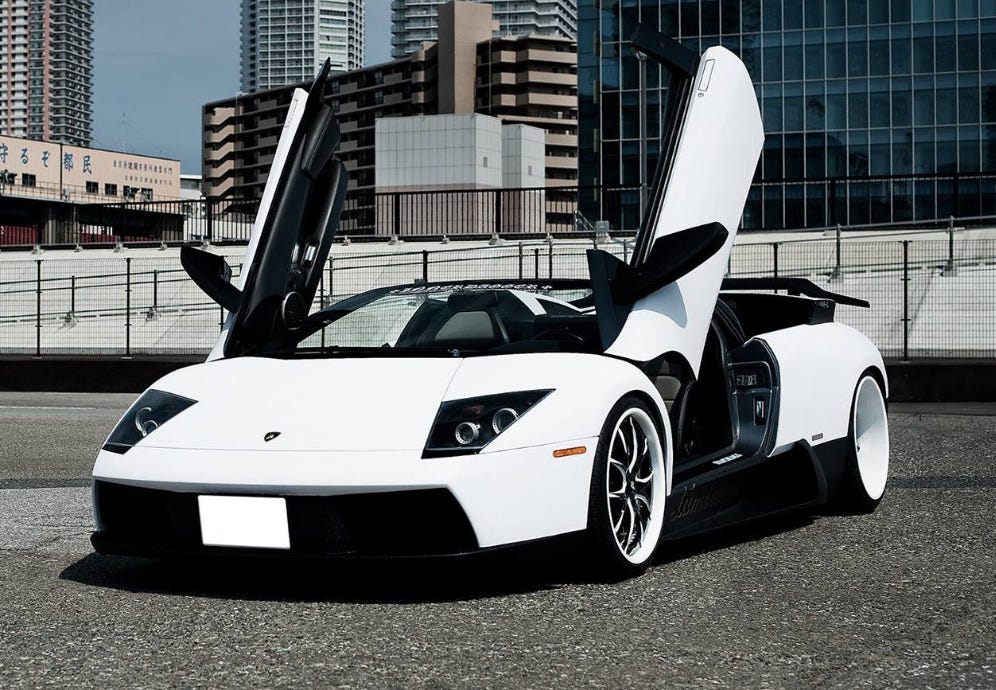 Although I hear they get terrible gas mileage so maybe not as cool as everybody thinks.

I was on the floor of CBOT from 92-98…absolute debauchery… I was clerking in 30 yr bond option pit, a lot of the clerks would chew and spit into a medium size dixie cup, maybe 6 ounces, in their front jacket pocket. It was a slow day and conversation turned to one guy who had a cup spilling chew spit. Not uncommon, some smart ass bet the guy to drink it…he initially said no…however…the money started to grow to around $2k…still, no dice…but right at the opportune moment another clerk came over to check a trade, asked what the big deal was drinking chew spit…found out there was $2k for him if he did it….and of course without hesitation, grabbed the cup, gulped down the spit to howls of laughter and disgust and walked away with $2k.

If you haven't accidentally had a glass of someone else's dip juices in your life then you really haven't lived. It's like when you have OJ and milk and think you're drinking the milk but instead it's the OJ. That overwhelming first reaction is exactly like this except your buddy's SKOAL Apple spit registers at like 77 degrees Fahrenheit when baking in that aluminum can. And while disgusting, there's a lot worse you can do on the trading floor for $2k.

This Was A *REAL* Job

I was a runner in the Corn Options pit then got hired out of college. The first 3 months I was an "intern," which meant that I traded on the market simulator while this guy paid me $500 cash out of his pocket every Friday. Not bad. Really though, I was the office runner. Coffee, lunches at Ceres or Cellars Market, cash pickups/drops for the bookie biz. I delivered gifts to his Polish mistress/barber at the hair salon downstairs and - most importantly - picked up the White Colombian from Juan, a West Side dealer that the aforementioned S&P trader met in prison.

One of the guys in the office had a garage under the El tracks over on Newport Ave, near Wrigley. That's where he kept his ATVs, poker table, golf simulator, etc. One day he takes me over to hit some golf balls, drink a few beers and we're gonna go back to the office before close. Not so fast. His wife calls, so he leaves me in this garage to meet a guy named Juan for a "pickup" while he talks goes to see her… So, the face-tatted drug dealer and his cousin show up and sketchily overstay their welcome. Not the best crowd to entertain. By now it's past 4pm, the guy isn't back and I'm tying too much of the product. I'm stuck in this fucking garage with nothing to do but hit golf balls and indulge for 3 hours (I can't leave it unlocked). He finally comes back around 6 holding a purple button down shirt and tells me "we're going out to dinner."

Where? The Palm. Fine dining. The two of us, the owner of our firm and their two mistresses. Clearly, the boss didn't know that the 22y/o office slave would be there to witness the adultery, but that was soon forgotten. We dined like kings as everyone took turns going to the bathroom and the chicks flirted with the kid who was too fucked up to eat in order to make their men jealous… As desert is being served, the boss leans over, hands me a $100 bill and a doggie back full of lobster and says, "I think you've had enough. Fuck off."

About two weeks later, the entire office got our doors blown off by the Duetsche Bank monthly rollover. I lost $40K of the owner's money myself and that was hardly the worst. Lucky for me, I was told by phone that the free ride was over and not to come back. I moved to New York, stopped trading, and have avoided being locked in strange garages with drug dealers. The CBOT life is one way to live, but I don't think it's feasible in these modern times. Still cherish my time at the Board, though. As crazy as they were, they treated you like - the most dysfunctional family ever, but -family. Third row Cubs tickets on the regular didn't hurt either.

Like I said this was an all gas no brakes week of Traders doings weird shit. Hey kid make this drug deal for me. Shit never gets old. I don't know how you guys do it. Send stories to carl@barstoolsports.com
chicago+ 2 Tags