The pressure is on.

Clem & Francis have already extensively blogged on Blogger School today, and if I want to be the 3rd to re-blog it I need to hurry. Without my efforts, the number of people calling Kmarko a ‘moron who sucks at his job’ and ‘a shitty editor’ will dwindle, and we can’t have that.

With each “ping” of the elevator another crop of scarf-wrapped writers steps back into HQ. Defrosting after the twelve block trip from class, they stare at their laptops, brainstorming,

‘I want to be the third to blog this, but am I quick enough? Smart enough? What will my slant on Blogger School be. Have we mentioned Blogger School enough yet? Blogger school.’

It’s a race against time, but I know I can be the first to be third; I believe in myself. Leaning back in a one-armed, dangerously wonky office chair that looks like a Yeti smeared his poopy-butt on it after taco night, I transport back to the pristine, sunny classroom in my mind…

A Times Square meeting spot with functioning seating & internet… To my left, the Call Her Daddy gals make me look like a gargoyle in comparison. To my right, the slightly cauliflowered ears of KBNoSwag listen in. Behind me Big Cat sits on a counter wearing a searing blue Stone Cold Steve Austin jumpsuit with skulls all over it. Young professionals in NYC. 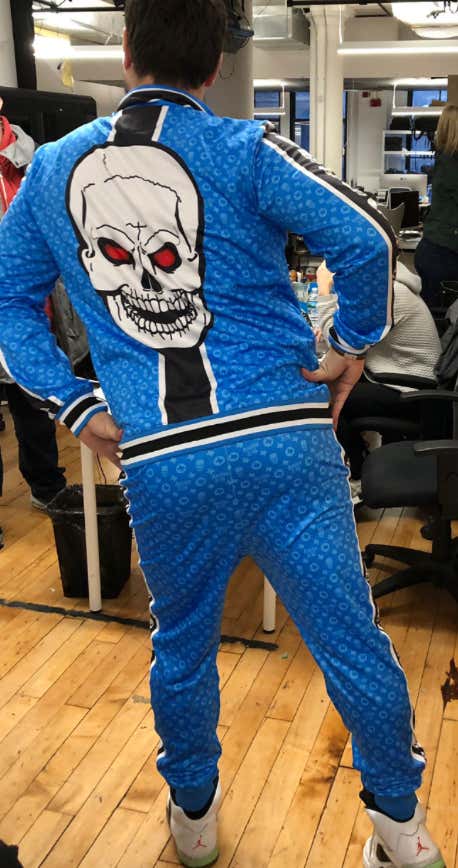 Two of our video guys start roving the room filming & I duck down so they don’t catch me shoving a cream cheese everything bagel in my face. I regret not bringing a ziplock bag for all the leftovers.. Why the hell am I the only one housing all this free food? Is that a tray of danish? Fuck yes, I’ll just…

My thoughts are interrupted when, at 10am on the dot, Dave picks up the mic & our chatter dies down. This is unusually serious business for Barstool.

I settle in since we’ll be sitting in this lecture for hours, straight through lunch. Marty Mush strolls in a few moments late (like a total fraud) & gets called out. I feel selfish delight because I’m normally the late one & this time I was a whole 3 minutes early, sitting near the front ready to take notes on the atmosphere so I can be the third to write about it.

A PowerPoint is cued up on the projector screen with no colors, no razzle dazzle, no photos. It just says, “Blogger School” in lame font. No ‘comic sans’ for a couple laughs or anything. Suddenly I felt a little anxious; Dave’s not the type to mince words. 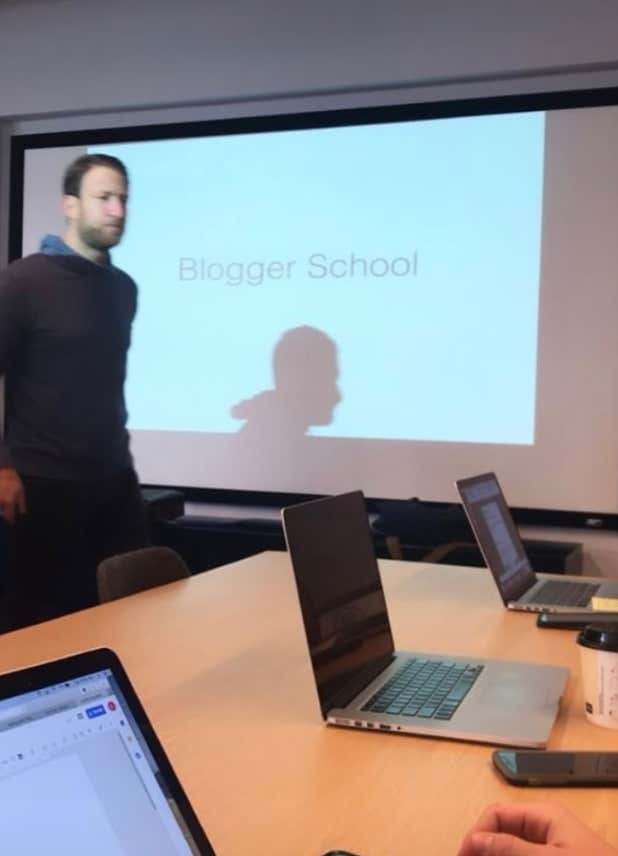 I kept waiting for some of my headlines to pop up, especially considering I’ve had my share of practically unreadable ones that make my eyes cross a little (no offense to some of my coworkers) when I revisit them.

“Guess I’m Not Getting Dirty Dogs For Dinner”…

What do those even mean? How would anyone know what those are about? What the hell have I been doing?!

I went down a daydream spiral of all my own blog mistakes and fuzzed out for a minute (possibly with the mantra, ‘Oh no, I think I’m a stupid hack idiot’ replaying in my mind), but came back to reality around 10:20am when Dave said something along the lines of,

“Oh, ha, thought we were gonna be here all day but, uh, I guess that’s pretty much it.”

Kmarko flipped through the PowerPoint which drove home some of the points Dave had made, Clem asked a few questions (he’s a delight so no one minded), and Big Cat had some uplifting words of wisdom that hit home for me (if you want to be successful you have to ignore the trolls, trust your gut, take creative chances & be yourself) but that really was it. Forty-five minutes of Blogger School.

Bolts on my chair creak, bringing me back to reality at HQ. More people are strolling off the elevator and I can tell they’re in a hurry to also write about blogger school. Have we mentioned Blogger School? Blogger school.

It’ll be a bad look if I’m the 4th or 5th. I have to be the best; I have to be 3rd. It was time to hurry this up & flip through the rolodex of things we’d gone over in the class so I could post this up:

Is my thumbnail photo bright, catchy & exciting like they discussed?
Agh, nope.

Is the headline straightforward, funny and/or riveting?
Shit, also no.

Have two other people already extensively covered this topic making it a triple blog?
Yes. 100%.

Are there about three different grammar tenses in here that make it confusing to read?
Sure was.

Alright, I’m falling apart. To be honest, I had no idea I was about to triple-blog.. & when I realized it, I was in too deep to pick a new topic. At the very least after being here since April, I know how to throw up a strong Hail Mary ending-pass until I get a better grasp on today’s lessons.