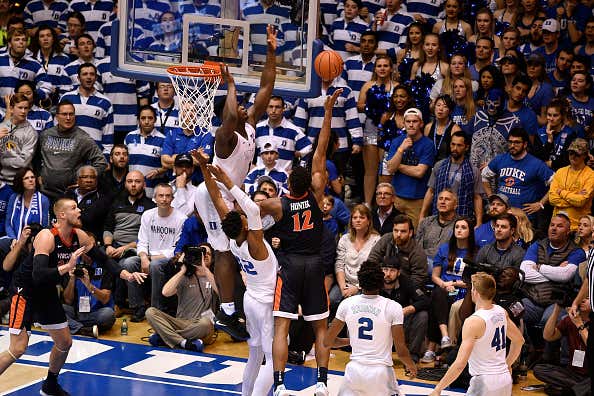 Are you not a Patriots or Rams fan? Well, let’s be honest. Are you really just not a Patriots fan, because no one is a Rams fan. This is a blog for you then. You have some time to waste as we have a couple of weeks to the Super Bowl and we’ll hear all about Goff vs Brady and Belichick vs McVay. Perhaps you’re just looking for some time to kill. Either way, I’m here to help you as we’re just about 1 month away from conference tournament time. It doesn’t seem that long ago that we opened with the Champion’s Classic, but here we are. So consider this a cheat sheet.

Good luck figuring out the best team in the country
This past week we saw Duke lose Syracuse but more importantly lose Tre Jones to injury. We saw Virginia then lose to Duke. We saw Michigan lose to Wisconsin. That means every team now has a loss so you can’t just default to that. So it becomes an argument essentially over Duke, Gonzaga, Tennessee, Michigan, Michigan State and Virginia as to who is the best team in the country. Every team has a weakness, so it just becomes pick which one you trust the most. For me it’s Duke when Tre Jones is healthy.

The Pac-12 is still a disaster
The conference is a complete mess. I mean, I guess, Washington looks alright and Oregon State has been a pleasant surprise in conference play. But, that’s really it. Oregon got Louis King but lost Bol Bol. Arizona is in a rebuild year. Arizona State has looked terrible in conference play. UCLA, we know all about. USC can’t stay consistent. This is an entire disaster and we’re trending to a 2-bid league.

Kentucky has turned a corner … again
We heard about Kentucky turning the corner after it beat Louisville and UNC to wrap up nonconference play. Then they looked terrible and lost at Alabama to start SEC play. Now after a win over Auburn we’re hearing about Kentucky turning the corner again and looking like that preseason top-3 team. The main reason to this has been the play of Ashton Hagans. He’s arguably the best defensive guard in the country and is starting to attack offensively. Kentucky still needs to figure out a bit rotation wise as the pairing of PJ Washington and Reid Travis doesn’t make a ton of sense. But, with games against Mississippi State and Kansas this week and we’ll see just how far this corner turn has gone.

Mark Turgeon is starting to get road wins
Maryland entered the year as a preseason top-25 team. Then the nonconference was pretty uninspiring and a road loss to Purdue led to all the same storylines with Maryland. Turg can’t develop dudes. Turg can’t win on the road. They now having wins at Minnesota and Ohio State. Maryland has looked like the No. 3 team in the Big 10 and the development of Jalen Smith to go with Bruno Fernando has made for one of the best frontcourts in the country. This is an important season for Mark Turgeon. I talked about how he’s not on the hot seat, but Maryland fans have become a bit whatever with the program. They don’t have a rivalry in the Big 10. They haven’t had major success yet. We can see a Sweet 16 trip this year with a good young core.

Just how good is the middle of the Big 10?
The Big 10 was the talk of the nonconference. They are going to get a bunch of bids to the NCAA Tournament, but outside of Michigan/Michigan State/Maryland/Nebraska, the question of just how good these teams are is a fair one. Wisconsin beat Michigan but also lost 4 of 6 before then. Purdue relies on Carsen Edwards. Indiana has lost four in a row. Iowa started 0-3 in conference and has now won 5 in a row. Ohio State has lost 4 in a row. This feels a bit like the Big East the last few years where the middle gets jumbled up and that makes for talk of the strong conference to go with great teams. Last year it was Nova/Xavier as No. 1 seeds and this year it’s Michigan/Michigan State fighting for 1/2 seeds.

The Big East is Villanova’s again
Remember how everyone talked about the demise of Villanova? Well, here it is undefeated in the country. They’ll be battling Marquette for the Big East title, but Nova is starting to look like a good team .. again. This time it’s because Eric Paschall is starting to hit shots –  he was pretty bad in the nonconference. Phil Booth has also become the go-to guy. On top of that we’re seeing Wright play that smaller lineup again with Bey/Samuels playing for Cosby-Roundtree and running Gillespie/Booth/Bey/Paschall/Samuels.