It’s 2019, and Instagram’s bravest, hottest, and richest world travelers are starting to make the trek to some more unconventional spots on the map. With elements like danger, pollution, and boredom becoming trendy aesthetics, social media celebrities are starting to ditch the luxury resorts and hit up some shocking new places instead. After interviewing and grabbing quotes from a few of the top “influencers” in the game, my good friend Nick (@nickturani) and I broke down some of the most traditionally unappealing travel hot spots in the world. The culture and architectural beauty of Steubenville has helped give it the nickname “The Paris of the Upper Ohio Valley” for its exquisite cuisine and artwork, contemporary postmodern designs, and its enchanting location on the lush banks of the dazzling Ohio River.

Whether you’re checking out one of the town’s annual Halloween parades (top left), its scenic coastal views (top right), the ancient ruins of Victorian-era medicinal shoppes (bottom left), or family-friendly amusement destinations (bottom right), Steubenville is a guaranteed thrill for travelers of all ages. For clothing, jewelry, and other luxuries from the globe’s most coveted labels, hightail it to the freshly-minted Fort Steuben Mall in the city’s bustling Eastside tourism square. The world-renowned shopping center, which earned a star on Yelp, houses high-end boutiques from the likes of JCPenney, Payless Shoesource, and a kiosk that offers a colorful array of knock-off G-Shock watches. Are you a man who loves being a male and traveling without fear? Dharavi, oftentimes referred to as “The Paris of Maharashtra,” is nestled snugly in the heart of Mumbai, and can be your perfect summer retreat as long as you don’t mind the humidity and have the correct genitalia between your legs. I was lucky enough to catch up with influencer Brent S. (@GlobetrotterBrent) for a first-hand account of Mumbai and the surrounding neighborhoods.

KB: “So you had a 4 hour layover here on your return trip from Thailand. Mind sharing what you saw?”

Brent: “It’s been the dream to come here, so this devastatingly long layover was a pleasant surprise. I managed to walk the streets and grow really close to the locals. It’ll be an experience I’ll never forget. I dipped my toes in the brisk stagnant waters of the Dharavi canals, and was able to sip on some of the best Nimbu Pani I have ever tasted.”

Brent: “The one thing I will never forget is the people. We never actually spoke, but they had such a kindness in their eyes.” 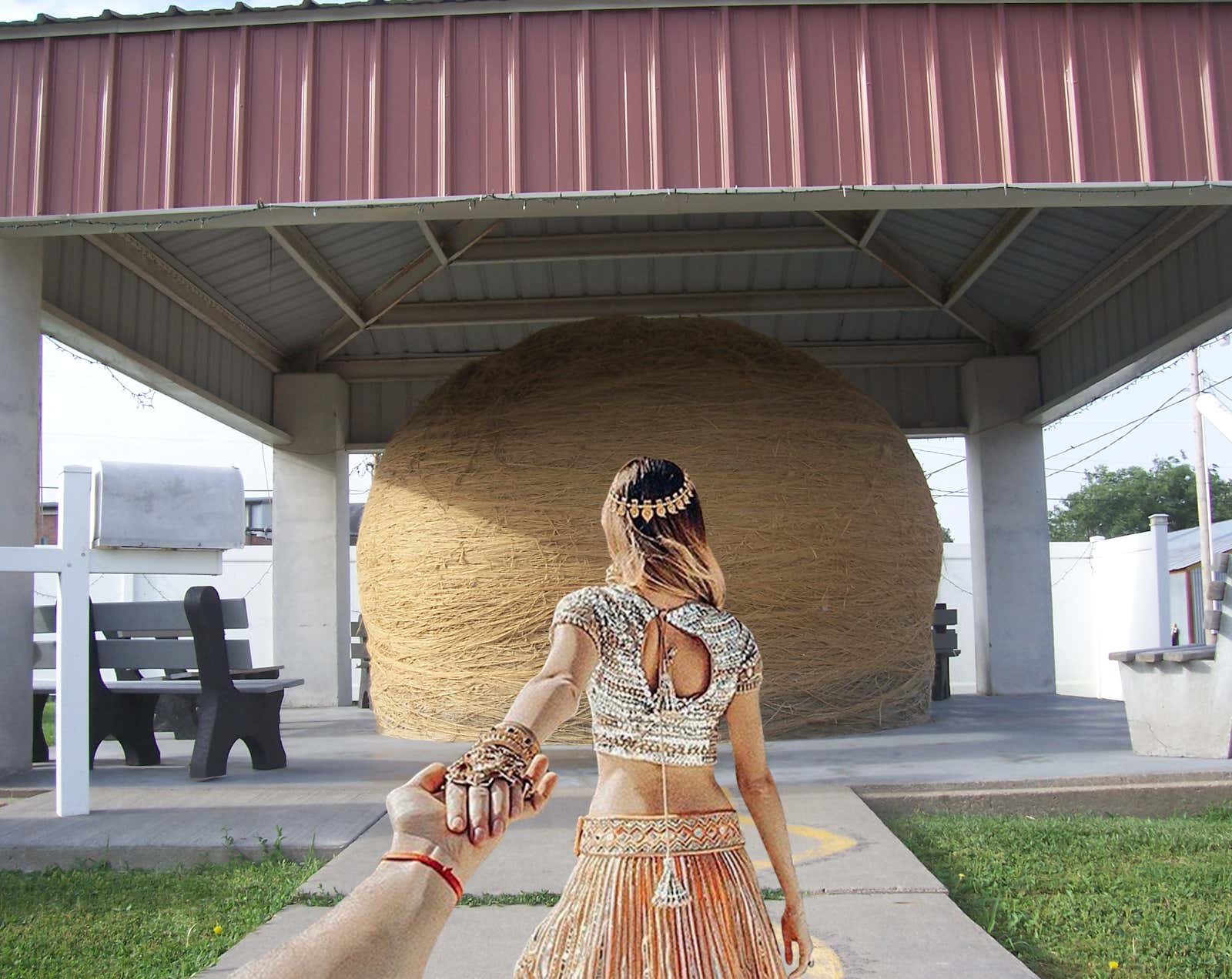 Checking out one of Kansas’ historic cities, or the other one, is a necessity for many travellers, thanks to iconic roadways like I-70 and I-135, which run through the state for hundreds of miles and make it statistically rare for drivers not to stop at least once along the way.

Longing for a photo-op but can’t seem to find any worthy backdrops or three-dimensional objects on your journey through The Sunflower State? Nicknamed the “Taj Mahal of Kansas,” the Great Ball of Twine in Cawker City is the state’s tallest, widest, most recognizable, most photogenic, and only monument. China, or more informally, “The Paris of Asia,” may not be your cup of (Oolong) tea, but it’s attracting some of the biggest and hottest Instagram travelers in the world. I caught up with 27-year-old, Kendall M., who recently made the trip to an unknown city in China. Kendall is a “public figure, influencer, and fur mommy to Sadie, Rex, and CoCo.” She is also a spokeswoman for the workout apparel brand, [REDACTED] based out of China.

KB: “I couldn’t help but notice that you have ‘fur mother’ in your bio. Don’t you have a human daughter as well?”

Kendall: “So when I was finally sponsored by my favorite active lifestyle clothing brand, I knew I had to go to where it was made to make sure it was okay for me to get behind.”

KB: “Yeah, I’m seeing on Facebook right now that you do, indeed, have a daughter, Lakynn. She’s six.”

Kendall: “So when I arrived, I was instantly SO inspired, because I have never seen a group of children work so hard. It pushed me to work harder on my career. Those kids are going to grow up to be VERY successful in the business world as long as they quit smoking. Before you throw away that XL stained Denny Hamlin t-shirt, consider packing it in your Samsonite and head down to Parkersburg, West Virginia.

Birthplace of Besiktas Basketbol legend, Deron Williams, Parkersburg is a humble town filled with many a surprise. It won’t take long to understand why Parkersburg is called “The Paris of Wood County” by so many. Sports fan perchance? Catch a Parkersburg Bible College basketball game and cheer on your Sons of Perdition as they take on a group of philistines. Tickets available on their website.

Ignore the suspicious quotations around the city’s motto, “Let’s Be Friends,” and get to know the locals during your stay. Sit and chat over a plate of the best Philippines food at Philippines Best Food, or maybe wander the halls of the Oil and Gas Museum. Whatever you reason is for visiting, you will quickly learn why companies like Purdue Pharma call Parkersburg a “godsend.” If you’re a fan of blasting Kendrick Lamar on your way to Bid Day, or debating the most influential member of NWA with your baseball teammates, then sunny Compton, California may be just for you. Home of tennis greats Venus Williams and Richard Williams, Compton will surely win you over with its kind locals and decadent cuisine. Wearing your favorite red bandana? Make the short walk to the quaint village of Chesterfield Square and check out its shops and boutiques. As of late, Compton has been a hot spot for prominent Instagram users. One even bold enough to call it “the Paris of SoCal, nay, the Paris of California.”

Another had this to say:

Are you somebody that rocks Kevlar with ease? Have a brand affinity for The Islamic State? Have the urge to sink your teeth into a fresh carp pulled from the River Tigris? Don’t you fret, as you are not alone. Millennials have been invading Baghdad as of late, going so far as to call it “The Paris of the Abbasid Caliphate.”

Caucasian social media personality @yeahhjewelzz of Miami described Baghdad as a “whole vibe” and admitted, “it’s a lot more chill now that Al-Qaeda fell off.” “Don’t get me wrong…it’s definitely like super poor still, but I think that helped make the experience more surreal for me, personally. Seeing people live in those conditions and not giving up on life — that was such a mood. It inspired me to work even harder,” the professional social media influencer explained. The Paris of Middlesex County and the Crowned Jewel of the Boston Metropolitan Statistical Area, Lowell is a never-ending vibe for spontaneous and premeditated adventure-seekers alike. From the glittering waters of the Merrimack to the captivating, asbestos-infused charm of abandoned mills, Lowell’s beauty will linger with you for long after your visit ends. Your typical vacation destination may very well have beautiful buildings and statues that you can only take in visually. But here in Aleppo, you can breathe in the stunning feats of architecture, as the majority of it is airborne dust. Called by many “The Paris of the Syrian governorate,” Aleppo’s charm may surprise you.

Famous Instagrammer @TropicalKarleigh is in some hot water over a recent photo she posted on the platform. The post pictured a certainly illegal jet tour over the war-ravaged land, along with showing off her undoubtedly stylish Adidas Retro Hard Shells. Her response to the negative press: “I wanted to raise awareness for whatever is going on in Siberia, a cause I have always felt very strongly for. I wish there was something more I could do, but I spent all I had on that jet rental.”

When asked about choosing her geolocation for the picture as ‘Paradise,’ she stated “I think the point of that was to show that if you look hard enough, you can find beauty even in the most chaotic of places, you know?” Suffering from wanderlust or a nagging bout of travel FOMO? Well look no further than the vibrant city of Mogadishu, AKA “The Paris of the Horn of Africa,” and change that fear of missing out to an exhilarating fear of going missing. Wanna feel like a world-famous movie star? Well Mogadishu will allow you to channel your inner Ewan McGregor in Black Hawk Down or Keira Knightly in Pirates of the Caribbean, and experience real-life war skirmishes and coastal piracy first-hand. Not ready to leave? Well there’s a good chance your flight will be cancelled, thanks to the Al Shabaab and their wacky habits of launching terrorist attacks on airports. Have an unquenchable thirst for adventure and exploration? Look no further than The Paris of Mid Michigan. Flint, which is conveniently situated just miles from extravagant Rust Belt getaways like Downtown Detroit and South Detroit, offers a unique cultural experience. I caught up with 24-year-old model and travel photo blogger, Raelynn K. of Rolling Hills, California, who spent up to a couple hours in Flint on Friday, giving a motivational speech at a local school.

“I think beauty is in the eye of the beholder. I mean, yeah, the Flint River is like really toxic and polluted and stuff, but I, personally, saw it as a quirky and hip river with a stylish matte black finish [giggles],” Raelynn explained to me over the phone from her suite at the Royal Park Hotel in Rochester, Michigan.

“That’s the mantra I tried to preach to the kids of Flint: Just because some people might look at you and be like, ‘ew gross,’ doesn’t mean anything if you truly believe that you’re not gross” said the model who admitted to suffering from mild acne from age 13 to nearly 14. East St. Louis, oftentimes called “The Paris of East St. Louis,” is a must-stop destination for travelers who must stop in the local area. Named the most dangerous city in America in 2018, ESL certainly isn’t for timid thrill-seekers or the faint of heart.

One young tourist had this to say: “A lot of people like to throw around the words ‘dangerous’ or ‘murder capital of the United States,’ but those are the people who judge a book by its cover and also by the words inside the book.” She then went on to say, “Me and my partner, Atticus, got the cutest Airbnb. We went down the street and bought those 40 ounce malt liquor thingies from a local merchant, and then we decided to sip them on our stoop. It was hilarious. I only drank half.” “My longtime boyfriend Beckett has been begging for this since we started dating 3 months ago. I finally surprised him with a flight here as a reward for getting his Multi-Dis degree from Arizona State University after a quick 6 years.” With a population of nineteen people, Anus is known by most as “The Paris of France.” Coming in a little behind Castelmoron-d’Albret as France’s smallest town, the residents in Anus stirred up quite a stink stating: “They have far more than 19 residents, Violette Archambeau alone is pregnant with triplets!” Until that is settled though, Anus will have to settle for number two.