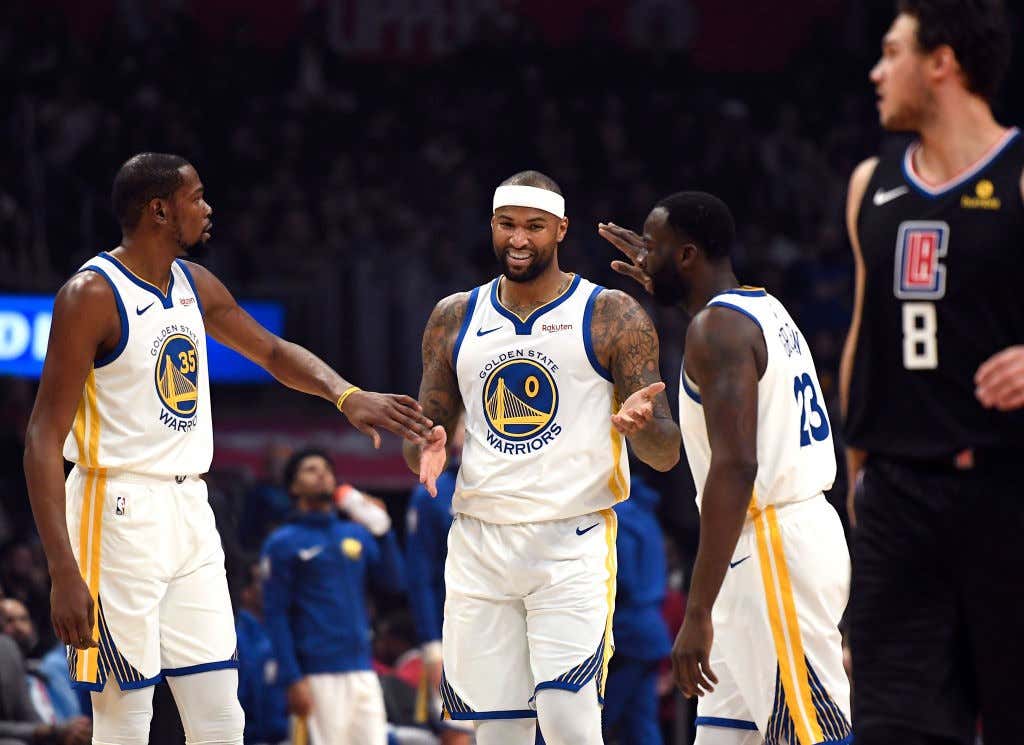 Good morning everybody happy Saturday and welcome back to another edition of Last Night In The NBA where we bring you up to speed on everything that went down from the night before in the Association. With 7 games on the schedule we got a bit of a mixed bag, over half were close, decided by 6 or less so that was good, but we also learned that life as we know it is over. You’re excited that maybe your favorite team is playing well right now? Well last night we learned that none of that matters. Allow me to explain, if you were out and didn’t get to watch Friday’s action, here’s what happened

On the surface it may not appear that this was all that important of a game considering both of these teams are under .500. However, given the conference they play in and the fact that they are separated in the standings by just 1.5 games, the H2H series is important. DET had already dropped the first meeting in MIA, so pressure was sort of on for them to secure this win and even up the season series. To do that, they made the wise decision of making sure Blake Griffin got the ball, and he did not disappoint

It looked like the Pistons were going to run away with this after the had a 30-17 lead after the first quarter, but coming out after halftime and dropping just 12 points was not only brutal to watch, it also gave MIA life. Blake got some help from both Reggie Bullock and Luke Kennard

who had a combined 41, but none of that matters I’m sure to Pistons fans since Drummond got hurt just 7 minutes into this game. Fortunately they were able to bounce back in that 4th quarter, because losing this game at home and losing Drummond would have been tough.

For MIA, they got another vintage Wade performance

and shot a respectable 50% from the floor, but the 19 TOs were clearly a problem. They’ve now lost back to back games and are just .500 on the road, and only CHA has had a worse run over their last 10 than the 5-5 Heat. The good news is they have CHI/CLE/NYK coming up so at least they should be able to somewhat right the ship.

We’ll focus on the Celtics a little later per usual, so in the meantime let’s revisit all the positives coming from the MEM side. Despite getting down early, despite losing 14 of their last 17, this Grizzlies team did not quit. In fact they gave the Celtics everything they could handle which is a totally separate issue, but at least this team is playing hard

They even got solid bench production with three players in double figures, had 16 3PM and only 9 TOs, the one real problem was Marc Gasol laid a big time egg. I’m talking a 1-10 egg. He did still have a double double with 11 rebounds and 12 assists but each time they needed him to make a bucket, the man was nowhere close. Now 8-16 on the road this season, it’s at the point now where maybe the play is to just blow this thing up, keep your lottery pick and see what happens.

Yo the Brooklyn Nets are on a goddamn roll. They’re 7-2 so far in 2019, and a huge part of that success has to be due to D’Angelo Russell playing the best basketball of his career. The man is on some sort of run right now

Someone is going to give him big time money this summer since the Nets pretty much made their PG decision by extending Dinwiddie, but another 8-12 performance from deep, just look at what he’s been doing lately

Not bad! BKN dropped a cool 63 points in the second half, and came back after being down by as much as 21 in this game, which is becoming sort of the norm for this team after they just did something similar against HOU. I mean this was a pretty wild ending

So if you’re someone who is still looking over the Nets, don’t. They are going to make the playoffs and be a tough out for someone you watch.

For ORL, bad news is Aaron Gordon left the game with a back injury. That’s never ideal. He finished with 23, and the Magic did shoot 50% so it’s not like they played poorly, they just collapsed in the fourth quarter. Happens all the time

Another game with a high drama finish. Remember SA still stinks on the road, just 9-14 on the year, and despite their struggles the Timberwolves are actually pretty decent at home. Unlike some of the other close games this one was tight the whole way for the most part, had 6 players in double figures and while KAT led the starters with 23, the story in my opinion was the play of Derrick Rose

A tough 23 point fourth is what ultimately did them in, and SA played great defense on the final possession that didn’t allow Rose to get a clean look, and just like that this team is knocking on the 3/4 seed out West. MIN has lost 2 in a row and is sliding, now 3.5 out of the final playoff spot, and they are at the point where they can’t really be dropping games at home.

For SA, it was a collective effort for sure

Especially when you consider that DeRozan didn’t play. Even though they were very unSPurs like with 16 TOs, they were efficient with 50/45% splits with 11 3PM

We don’t need to waste much time on the pathetic Cavs. The only positive really was the play of Ante Zizic anyway.

You know the plan, they want to lose every game, they want Zion, things are going according to plan.

For UTA, here’s a team that is focused on repeating their crazy second half of last season. They’ve now won 6 in a row, are 8-2 over their last 10 and have currently played their way into the 7 seed

Hard to lose against a dogshit team when you get these type of performances from your main guys, and even though there are still issues on this team, they have seemed to figure things out as of late and are essentially saving their season with this current stretch.

We were all curious to see how Boogie looked, and although he fouled out in his 15 minutes, the results were pretty goddam terrifying

I don’t know what was more terrifying. The dunk that clearly showed he’s feeling good, or the back to back threes. This man is a long lost Splash Brother and that is bad news for the entire league. I’d say this went as well as any Warriors fan could have hoped, but for the rest of us we are so fucked.

For LAC, pretty hard to win when you put in 36/16% splits and turn it over 18 times. I mean what on earth were they thinking. Only two guys showed up in Tobias Harris and SGA

who combined for 52 of the 94. Not a great sign that both Lou Williams and Gallo left with back injuries, and sadly this was the 5th loss in a row for LAC which now has them on the outside looking in of the top 8 out West.

You know the drill, get the ball to Dame/CJ and let them carry you

Thing is they also got some help from Jake Leyman, who had one of his best performances of the entire season

Now 20-7 at home, POR has now taken over the 3 spot out West which is where they ended last season, and if they can just figure out their 8-12 road record, perhaps they will be able to catch DEN.

For NO, man, nothing is getting better.

To add to the disappointment, AD hurt his finger and is going to be out 1-2 weeks. That pretty much might be the nail in the coffin for this team because their defense continues to be really bad, they aren’t getting much from their bench, and are now 6-19 away from home. Hate to say it, but no chance AD wants to deal with this shit anymore, they’ve shown him enough in my opinion.

And that’s it! You’re now all caught up with everything that went down last night in the NBA. We’re back tonight with a full slate of 10 games and as always if you can’t watch just make sure to check back in the morning and I’ll fill you in. Have a great Saturday!