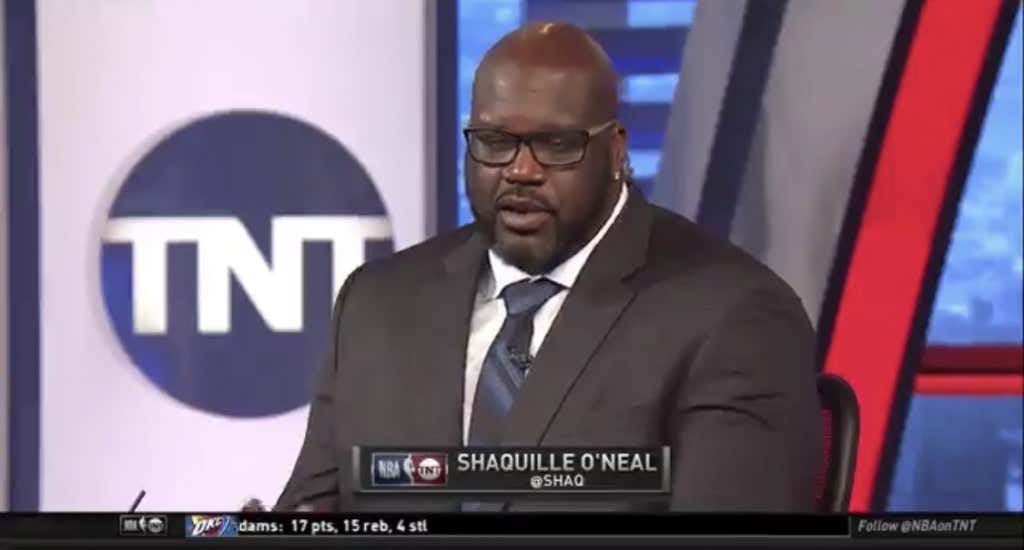 Last night after the Thunder collapsed against the Lakers my television stayed on TNT, as it does every Thursday night, and the graphic above appeared. I understand that it is standard television practice to put a name card under someone’s face the first time they appear on screen but come the fuck on. Who alive right now does not know that is Shaquille O’Neal? WHO. Not only just when he’s on screen, speaking, being one of the largest human beings to ever walk the planet, but just in general. Is there anyone alive generally unaware of Shaq’s presence on this planet?

I don’t think Shaq is the most famous person of all time. That would be ridiculous. Most presidents, Gandhi, Jesus, the prophet Muhammed, David Beckham, Hitler, Jordan, there are countless examples of humans who were far more famous and noteworthy than Shaq ever was or could be. No matter how many General and Gold Bond commercials he does he cannot get more famous I don’t think. I guess he could become the Pope but that feels unlikely at best at this stage of his career. I’m talking pure recognizability. Like you see a person and know immediately who they are. Even if you’d never seen Shaq prior, the second your eyes caught glimpse of this gargantuan meandering through your line of sight your brain would go, “Oh that has to be Shaq.” He’s fucking Shaq. That just comes with being Shaq.

Speaking of the Pope, while Pontifex is for sure more famous the second he takes off his hat and cloak he’s just a guy. He blends right into society no problem. Nobody is stopping him on the streets unless he’s draped up and dripped out in Pope gear. There is no disguise for Shaquille O’Neal. Shaquille O’Neal can only ever be Shaquille O’Neal. No amount of makeup, costumery, or magic spells could stop Shaq from looking like Shaq. Again, mostly because he’s the largest human being of all time.

Agree or not with this properly correct take, I think we’re all on the same side of history by saying that TNT does not need to waste their graphics department budget on Shaq name cards. It’s fucking Shaq, fellas. We know. We all know.