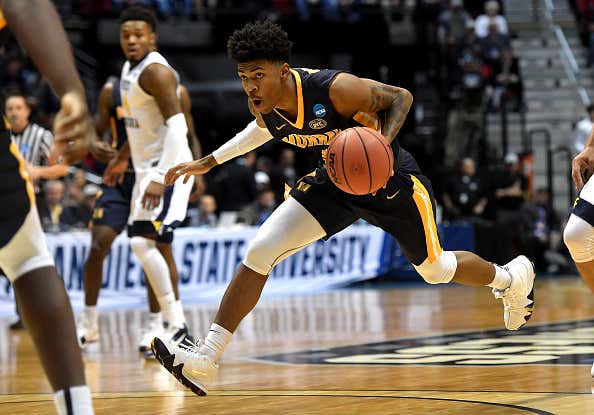 Listen, this is for Knicks fans only. Everyone else is going to be too scared to read this once they realize that this young core is coming together (please, let this be true). So with that in mind, I’ll be doing previews every so often about the targets for the Knicks tank. There are limited options of who they should go after, especially with the new draft lottery rules. There’s a great chance they stay top-5 and a likely chance they stay top-3. To me there are very few candidates for who the Knicks should even consider drafting. We’ll highlight those.

There may not be a more fun player in college basketball than Ja Morant. Everyone knew Zion Williamson was going to steal headlines and have absurd dunks. But, take a look at these by Morant:

Now, these are obviously why the casual fan might know Morant. He’s taken over Twitter and any time you see his name you assume something crazy is about to happen. But, there’s so much more to his game.

He draws a ton of comparisons to Russell Westbrook with his size and the way he plays the game. He likes to attack the lane more than pull up, but he’s improved his outside shot. He can be inconsistent at times, but he’s improved his outside shooting to 34%. His form is fine on his shot, which is encouraging as well as the fact as he’s shooting 78% from the free throw line in two years. He does have a bit of a pause in his shot, but it’s more just getting into the shot than anything with a hitch like you see with a Lonzo or anything like that.

This is the play that Knicks fans should be watching and be excited about:

He uses a ball screen and then creates space with his own move. That’s where he’s at his best. He’s probably the best ball handler in the class and has a variety of moves to create space. He likes to use an in-and-out. He likes to use the cross and hesitation. Then he uses a combo with his speed to get into the lane. But, this is the move that can translate to the next level. He’s using his speed to get the step and make the defender think he’s going to attack. From there his ability to stop on a dime (which is wildly undervalued) comes into play with the pull back dribble and then a clean looking jumper.

Here’s the encouraging stats if you’re a Knicks fan. According to Synergy he ranked in the ‘very good’ category when it comes to PnR passes to the roll man and to the spot up shooter. Assuming Kristaps comes back and is healthy, they will use this quite a bit, especially with Knox on one wing and Kristaps as a pick and pop guy.

He can get a bit careless with the ball. But, part of that is the extremely high usage at Murray State. Again, these are the Russell Westbrook comparisons. He can get a bit out of control sometimes because he knows he’s probably more athletic and quicker than 95% of the players he’ll go up against. That can lead to getting into the wrong position or getting too deep in the lane with too much help side defense.

Morant should be in play if the Knicks have any pick outside of No. 1. I’d still take Zion over him and roll with Zion/Knox/Kristaps on the wings and bigs. But, Morant is right there in terms of need. I’m not sold on Frankie Smokes as the long term point guard. Morant is someone that can thrive under Fizdale. He’s aggressive enough defensively that Fizdale can teach him the scheme and work on harnessing the entire energy. Plus, Fizdale is one of the best lead guard developers in the country. Putting Morant with Trier as the young backcourt is something that should excite Knicks fans. Yes, he’s at a mid-major and won’t be on national TV, but the dude is absurd.